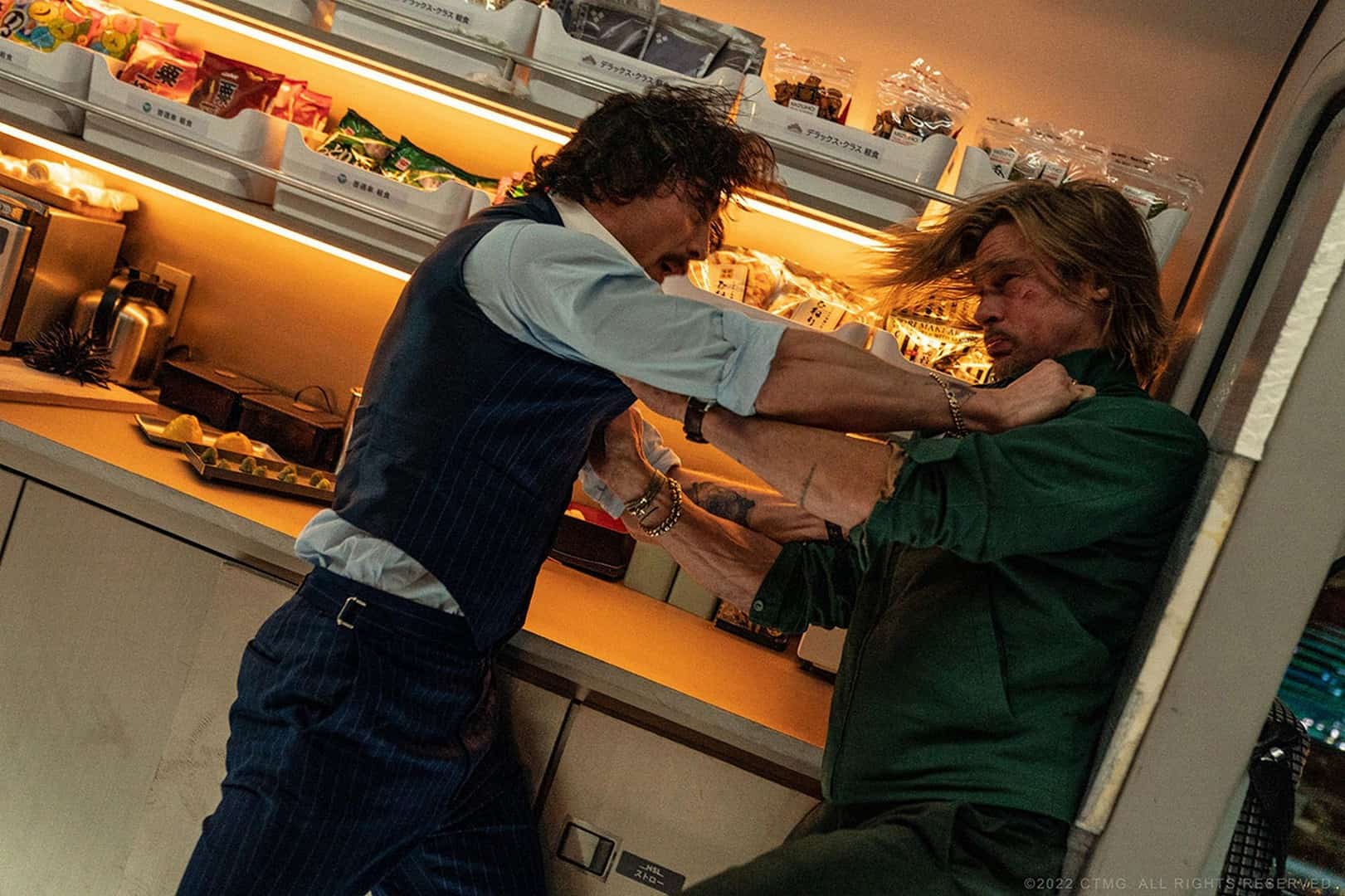 The Low-Down: Brad Pitt recently sparked rumours of his retirement, telling GQ, “I consider myself on my last leg.” Pitt subsequently allayed these fears, walking back his statement at the premiere of Bullet Train and saying he needs to “work on [his] phrasing”. If this movie is anything go by, Pitt still possesses plenty of movie star charm and action chops, even if the rest of it can be all a bit too much. 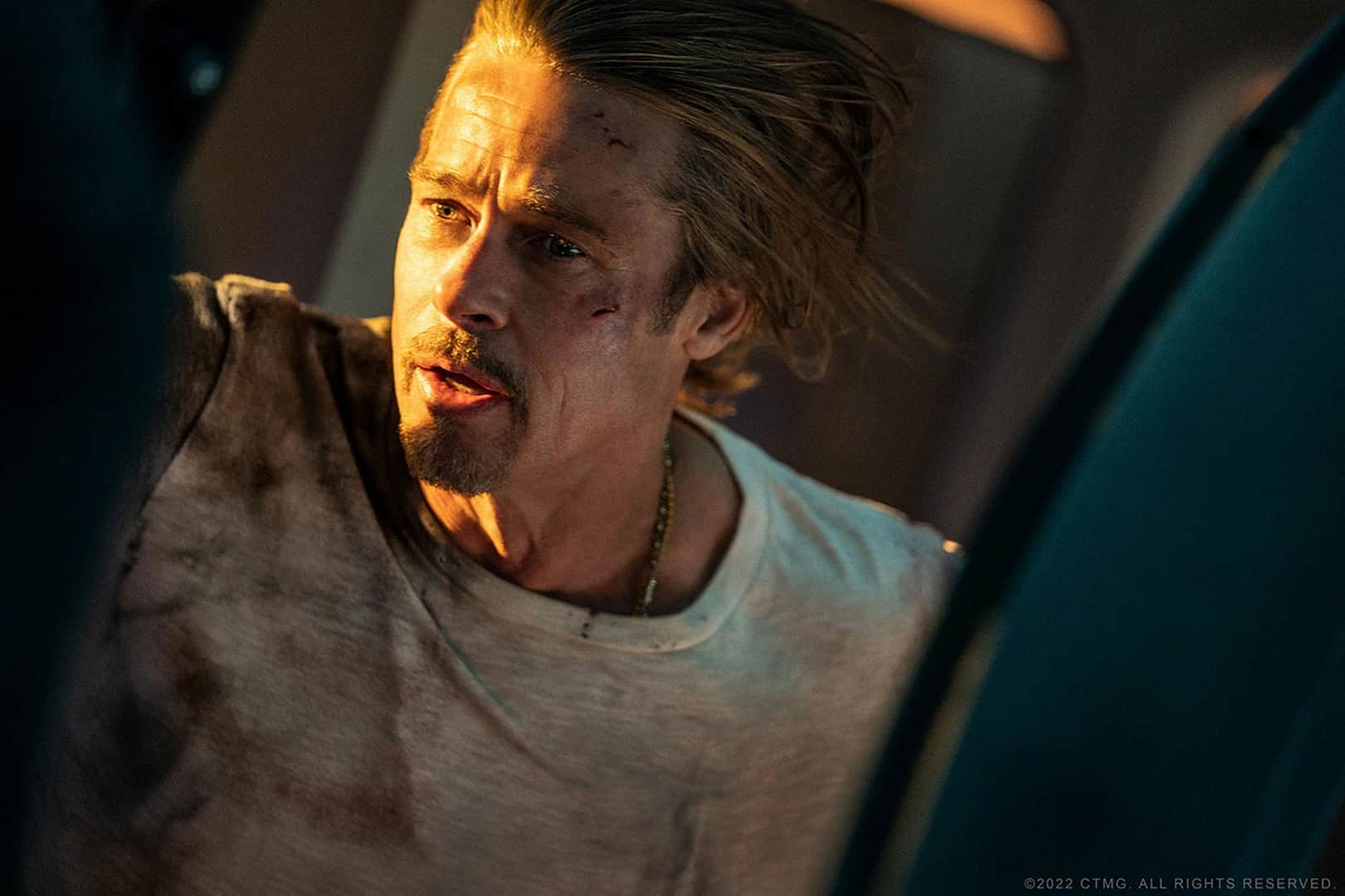 The Story: Ladybug (Brad Pitt) is an assassin called in as a last-minute substitute when a cohort goes on sick leave. Ladybug’s handler Maria Beetle (Sandra Bullock) assigns him what seems like a simple snatch-and-grab job: get on a bullet train bound for Kyoto, retrieve a silver briefcase, and get off at the next stop. Ladybug’s task is complicated by the presence of competing assassins, including the Prince (Joey King), the duo of Lemon (Brian Tyree Henry) and Tangerine (Aaron Taylor-Johnson), Yuichi (Andrew Koji), the Wolf (Benito A. Martínez Ocasio) and the Hornet (Zazie Beetz). The mission becomes a free-for-all and the carnage mounts. 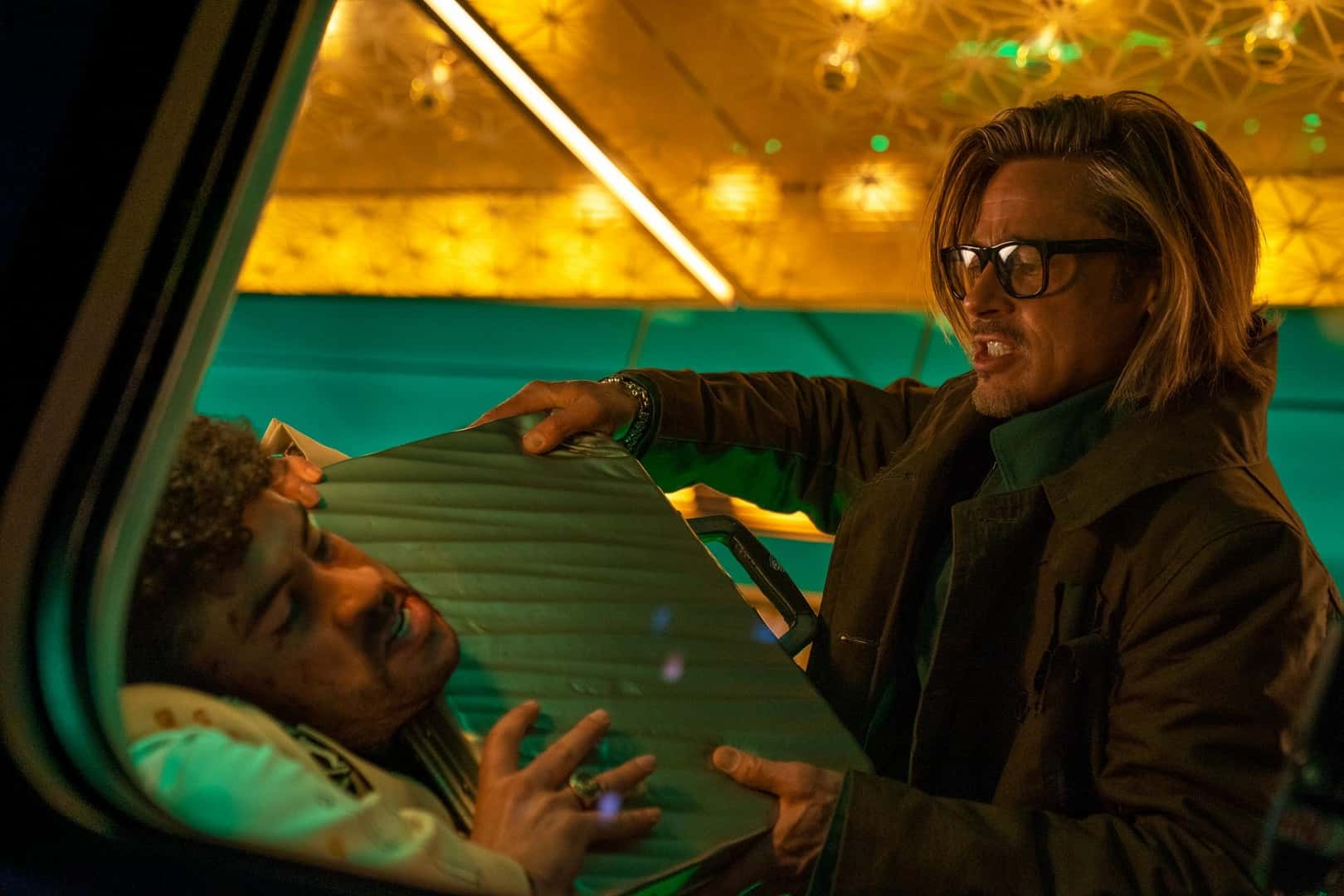 The Good: Bullet Train is adapted from Kōtarō Isaka’s novel Maria Beetle and is directed by David Leitch, who knows his way around an action sequence. The director was a former stunt coordinator and stunt double, having been Brad Pitt’s double in movies like Fight Club, Ocean’s Eleven, The Mexican and Mr. & Mrs. Smith. He later co-directed John Wick and directed Deadpool 2 and Hobbs & Shaw. Bullet Train is stuffed with bloody action sequences and sometimes, is entertaining and light on its feet. Some of the jokes land and there is an undeniable kinetic quality to the proceedings. There is an effort to build the world out and breathe life into the heightened milieu. There is also an assuredness to the tone and the movie never takes itself too seriously, even if it might go overboard with the winking and nodding. 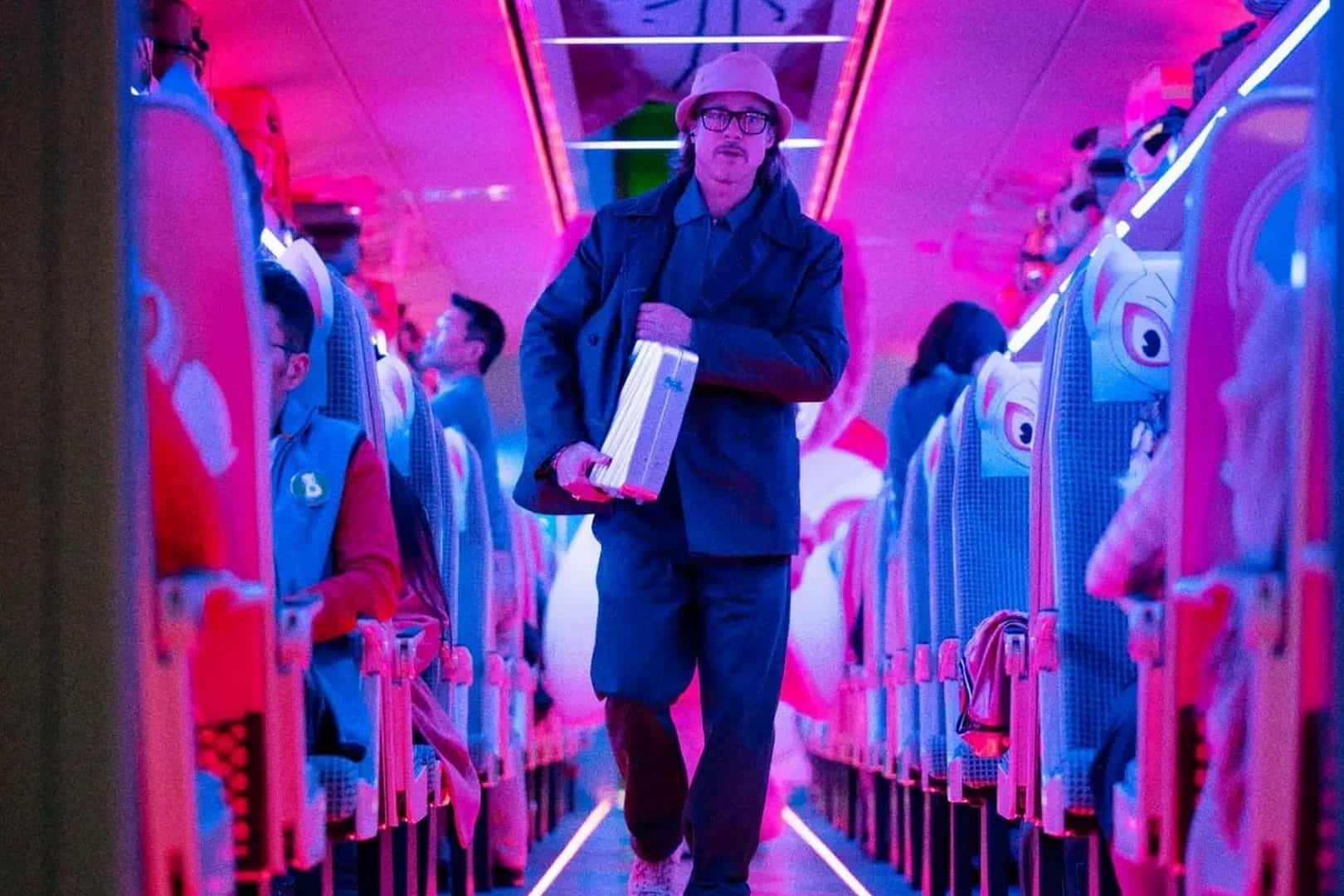 The Not-So-Good: Given that Bullet Train is set on, well, the titular mode of transportation, one would expect a tight, self-contained movie. Unfortunately, Bullet Train gets more and more bloated as it continues. There are multiple protracted flashbacks to provide the backstories of all our players, and sometimes it feels like the movie is fighting against its setting, eager to break out of the train cabin. All the diversions stem from a desire to create a textured world and to flesh the characters out, but they ultimately largely remain cartoon characters. There are running gags, including one character’s preoccupation with Thomas the Tank Engine, that eventually get grating. The director also seems to have imported a sense of smugness from Deadpool 2, which can make it difficult to connect to the story.

Other critics have called the movie reminiscent of Quentin Tarantino or Guy Ritchie, but what it most feels like is a serviceable but occasionally awkward live-action adaptation of an anime. The movie ends with a spectacular sequence – “spectacular” in the sense of prioritising spectacle. The movie already has a sense of deliberate artifice to it, but this set-piece sends things completely into the realm of the synthetic. 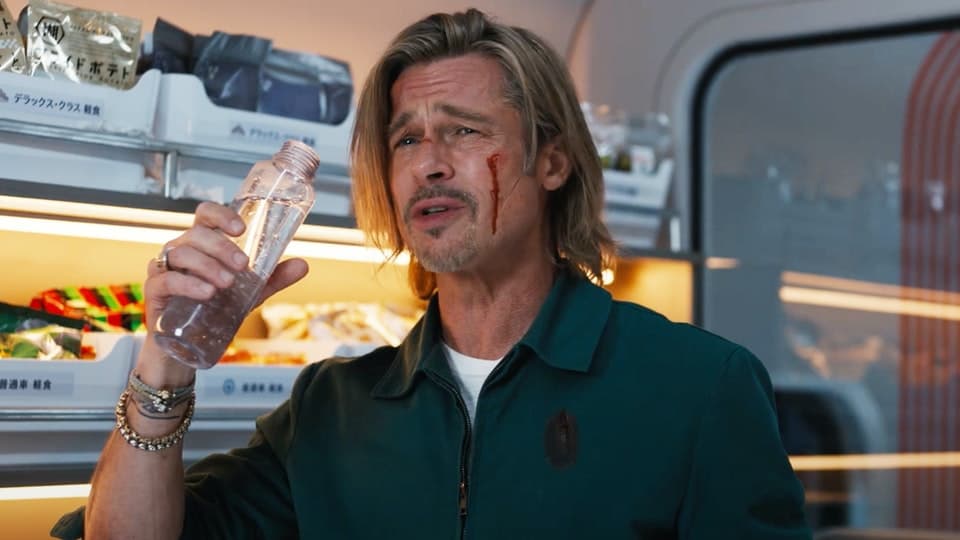 Passenger manifest: Pitt is a lot of fun in a role that ultimately isn’t very interesting. Ladybug’s main character trait is that he is in therapy and trying to leave his life of violence behind, so he spouts platitudes about positivity and optimism. Pitt sells all the action sequences and is likeable, but partially because he is wrestling for screen time with so many other actors, it never really feels like a vehicle for him in the way that his fans might expect it to be.

Joey King’s outwardly innocent character who is secretly a deadly killer is already an overplayed archetype, even though she gives a confident performance. 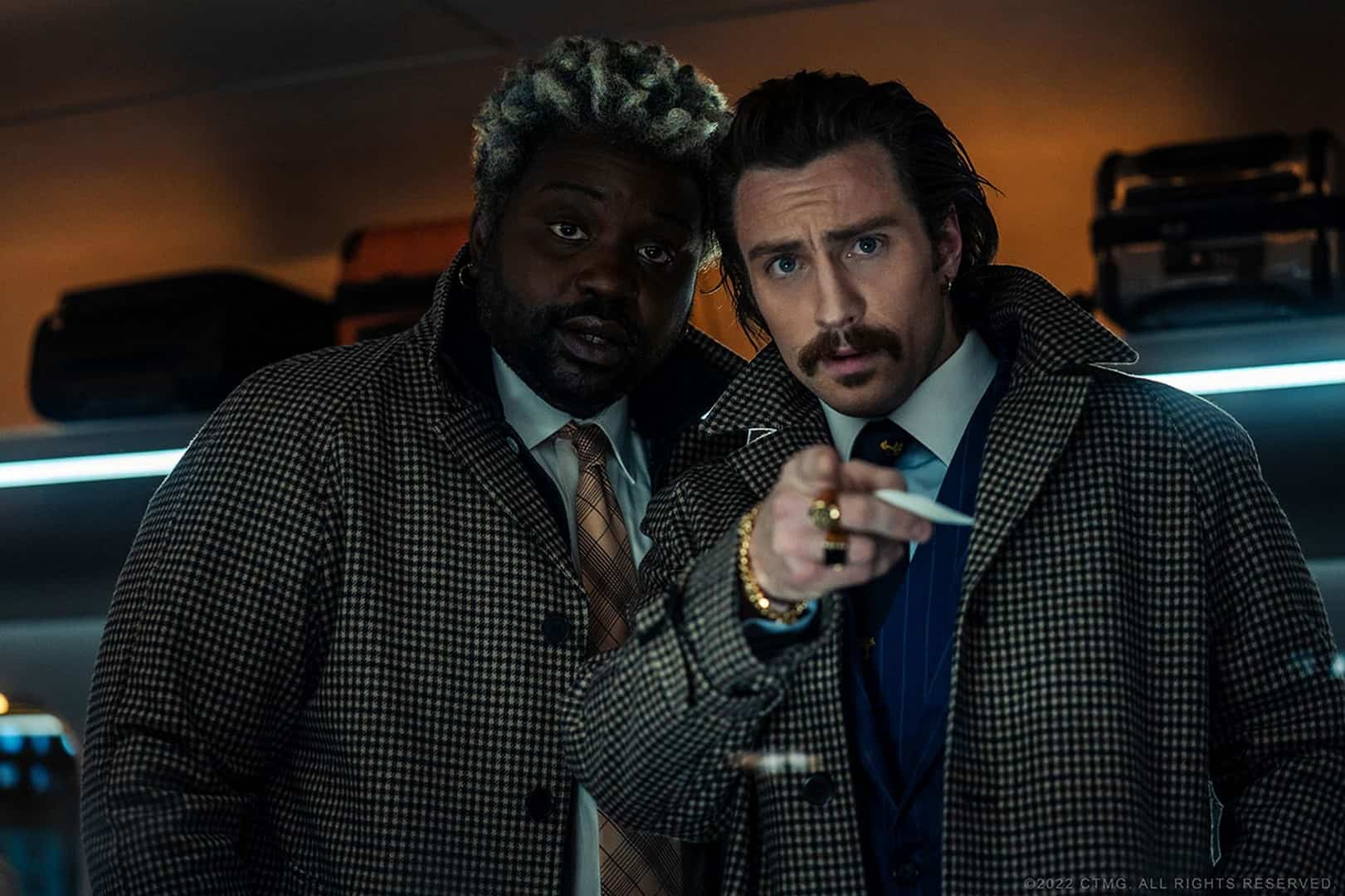 Aaron Taylor-Johnson and Brian Tyree Henry are an amusing double act. Their dynamic mostly consists of them bickering with each other, and it gets old after a while, but they do play off each other nicely. 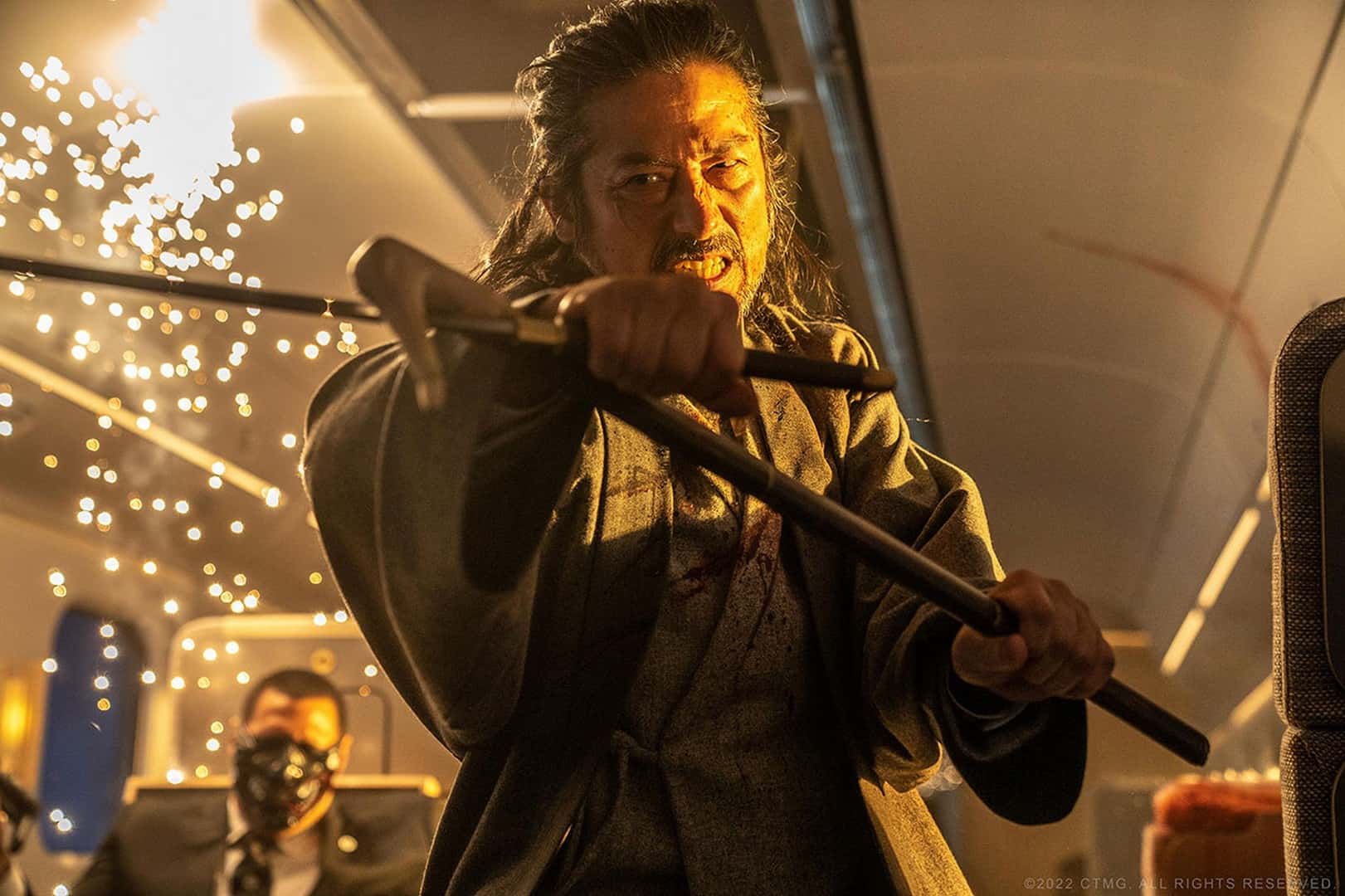 Hiroyuki Sanada pops up to lend the movie some gravitas. He is playing essentially the same character he usually plays in a Hollywood movie, but his earnestness is a welcome counterpoint to the film’s overall flippant attitude. 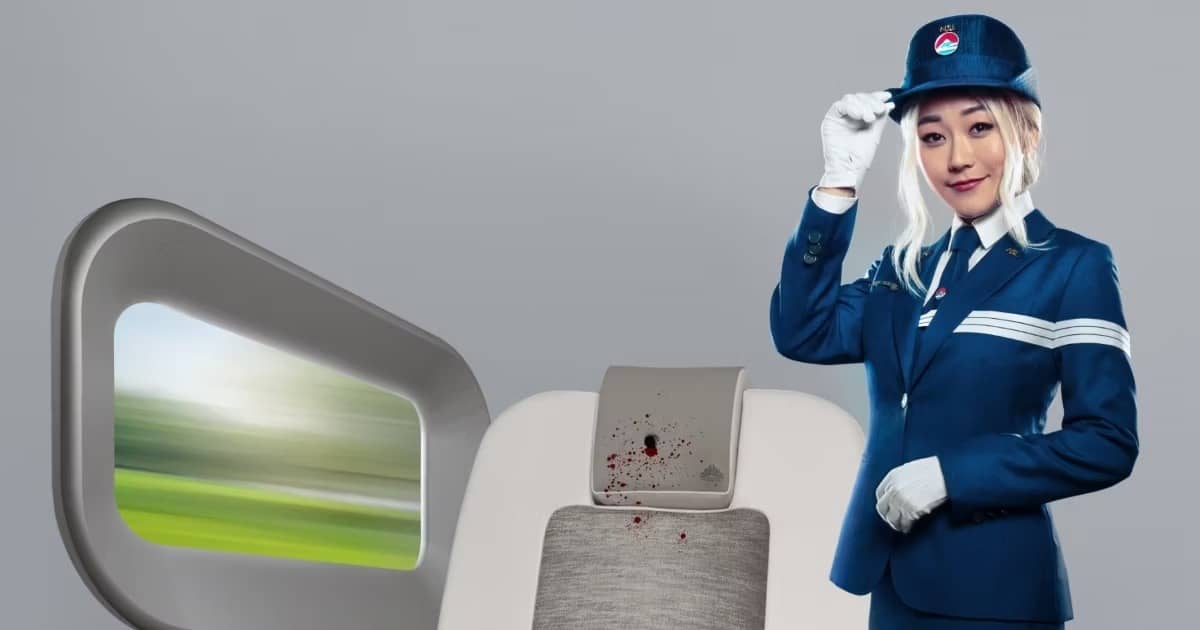 Several actors seem to be completely wasted, including Karen Fukuhara, who basically makes a cameo as a train crew member. Fukuhara has played Kimiko Miyashiro/The Female in The Boys and Katana in Suicide Squad, so it is frustrating that she could have easily portrayed one of the assassins instead.