Gun-slinging outlaws are far from the only terrors a small-town sheriff needs to fend off in this horror western. Sheriff Franklin Hunt (Russell) of the frontier town Bright Hope leads a party in search of Samantha O’Dwyer (Simmons) and young Deputy Nick (Evan Jonigkeit). Samantha and Nick have been kidnapped by savage troglodytes, cave-dwelling humanoid creatures who feed on people. The party comprises Arthur O’Dwyer (Wilson), Samantha’s husband who is nursing a broken leg; the dapper sharpshooter John Brooder (Fox); and elderly “back-up Deputy” Chicory (Jenkins). It turns out that bandits Purvis (Arquette) and Buddy (Haig) have incurred the wrath of the brutal troglodytes by desecrating their burial grounds. With one member of their group already wounded and two of them elderly men, it seems the odds are stacked against Sheriff Hunt and his gang. 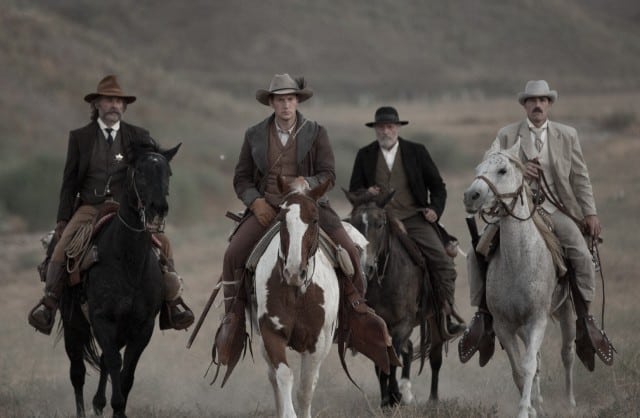 Bone Tomahawk is the directorial debut of multi-hyphenate S. Craig Zahler, a novelist, screenwriter, musician and cinematographer. Zahler’s noir western novels have garnered him considerable acclaim, and it is clear from Bone Tomahawk that he has an affinity for the genre. The film is an old-fashioned western that segues into graphic, gory horror and it’s quite clear that this is intended to become a cult classic, to be screened mostly at film festivals to discerning audiences. As such, its appeal is very limited and this is obviously intended for a niche market, at the risk of alienating anyone else. The film has been described as a “slow burn”, but one man’s slow burn is another man’s slog. Indeed, Bone Tomahawk meanders and dawdles, with not very much happening until its final half-hour. We get non-sequitur conversations about how one would read a book in the bath without getting the pages wet and the minutiae of flea circuses, which are intended to provide texture but come off as pointless instead. 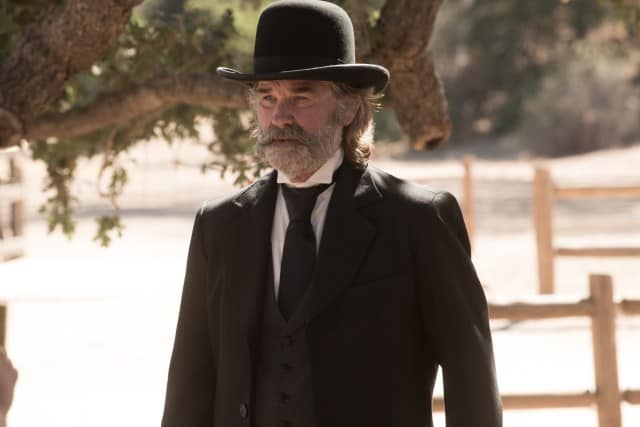 Thankfully, Zahler has wrangled an excellent cast and the characters embody familiar genre tropes without being one-note caricatures, which is difficult to do in a genre piece. Russell, as expected, seems perfectly at home in the setting and brings an authority to his sheriff role without overplaying the macho man aspect. He gets to kick ass, but the film wisely avoids indulging in cheeky references to Russell’s iconic past roles. For an actor of his iconic status, this is quite a small project to headline and Russell was drawn to the part as an early supporter of Zahler’s novels. We’ll next see Russell in a western again really soon, in the form of Quentin Tarantino’s Hateful Eight.

Wilson can sometimes be bland, but he fits the everyman O’Dwyer, and while the character seems set up as a bit of a milksop, he comes into his own and has us rooting for him to rescue his wife and survive this ordeal. Jenkins is on hand to provide most of the comic relief as the doddering old Chicory, but he is careful not to play the part too broadly. Fox rocks a beautifully tailored turn-of-the-century suit as the dashing, boastful rogue, though there are times when he doesn’t convincingly seem like someone from that time period. The same goes for Simmons, who comes off as a little too modern for a frontierswoman. She gets to perform a somewhat gratuitous sex scene with Wilson but is ultimately little more than the stock damsel-in-distress whom the valiant men have to venture into the unknown to rescue. She’s a doctor, so that counts for something, we suppose.

Bone Tomahawk is somewhat hampered by its limited budget, the town of Bright Hope obviously standing on a backlot that’s been used in countless westerns before. While the film presents us with well-drawn characters portrayed by some talented actors, it lacks a crucial forward momentum and the flabby mid-section is almost entirely devoid of urgency. The ending in particular packs in grisly scenes designed for maximum stomach-turning effect, but more impatient viewers are likely to grow restless before then. The smaller production gives Zahler the freedom to try many things that big studios would’ve forbidden him from doing and the most positive thing that can be said about the enterprise is that, well, it’s different. 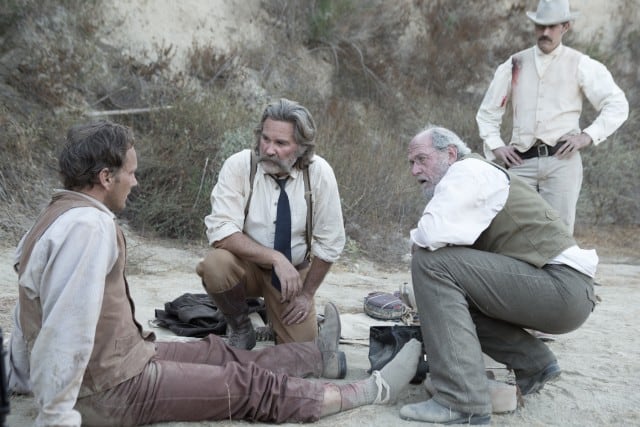 Summary: Kurt Russell’s strong performance gives this hybrid western/slasher flick some weight and gore-hounds might be pleased with the gruesome third act, but Bone Tomahawk is ultimately too slow and too spare to be a truly riveting genre offering.