What motivates anyone who goes on a treasure hunt? Is it as simple as “fortune and glory, kid”, the answer famously given by Indiana Jones? In this adventure thriller, we learn glamour has no part in the equation. Former naval submarine captain Robinson (Law) falls on hard times after he is laid off by a marine salvage company. When he hears about a WWII German U-boat lying at the bottom of the Black Sea, supposedly laden with gold, Robinson jumps at the chance to find this treasure. Leading a team of British and Russian roughnecks, including 18-year-old rookie Tobin (Schofield), Robinson heads out to sea in an old fixer-upper of a Russian submarine. Lone American Daniels (McNairy) is sent by the expedition’s mysterious, wealthy backer to keep an eye on the proceedings. Over the course of the journey, everyone on board realises that as cruel as the sea may be, human nature might just be even crueller. 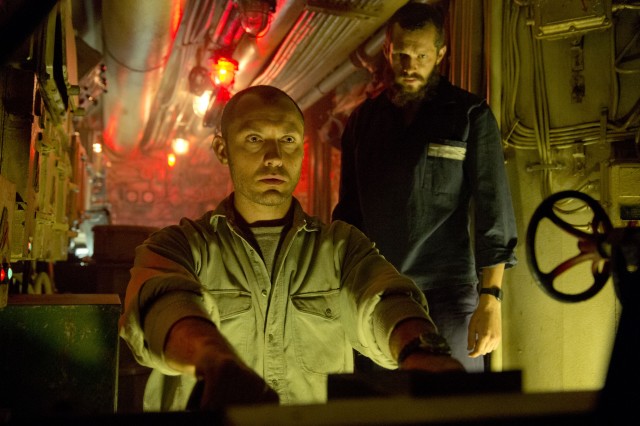 Black Sea is directed by Kevin Macdonald of The Last King of Scotland fame and this seems far more in the director’s wheelhouse than his previous film, the young adult romance adaptation How I Live Now. Macdonald and screenwriter Dennis Kelly have assembled an old-fashioned adventure flick the likes of which we don’t quite see any more these days. The dialogue is expectedly salty, but naturally so and it doesn’t feel like the script is straining to sound tough. There’s a believable griminess to the lived-in environs of the submarine and while several story elements are far-fetched, there’s an air of well-researched authenticity throughout. Sure, there are the expected clichés at play: the hero whose job has kept him away from his estranged wife and child, the greenhorn who gets picked on by the seasoned veterans, the “company man” akin to Paul Reiser’s character from Aliens, the one unstable guy who’s nevertheless excellent at his job and that old adventure movie hallmark, lost Nazi gold. However, the stakes are kept high and it’s far less predictable than this reviewer thought it would be, Macdonald masterfully sustaining nail-biting tension throughout.

Adding to the film’s believability is the meticulous production design work by Nick Palmer, who re-created the submarine interior on soundstages when it proved impractical to shoot the entire movie in an actual vintage Russian submarine. There are a few instances when the computer-generated exterior shots can feel a tiny bit dodgy, but it’s nowhere as egregious as in recent submarine movie Phantom. The scenes in which the divers leave the confines of the submarine and trek through the silt of the sea floor, being careful not to fall into underwater ravines, are thrillingly realistic. 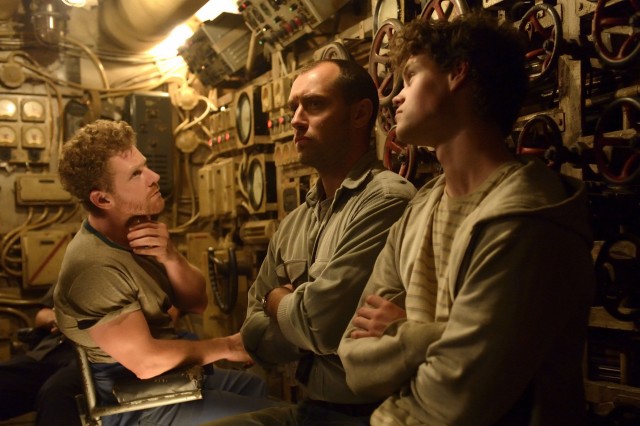 Black Sea is superbly cast, Russian actors including Grigoriy Dobrygin and Konstantin Khabenskiy lending personality and dimensions to the Russian crew members who in most other movies would blur together as peripheral characters. Slick, charming, handsome Jude Law’s transformation into the gruff submarine captain from Aberdeen, Scotland is thoroughly convincing. Here’s a leader you’ll want to root for, but who is flawed in the most human of ways, his judgement called into question since greed factors so heavily into the mission. Ben Mendelsohn is entertainingly mercurial as the unbalanced, knife-wielding Fraser. Scoot McNairy is every bit the fish out of water the “company man” always is in films of this type. Bobby Schofield lends the film a degree of heart and is able to become more than just “the kid”, so much so that audiences will feel protective over him. 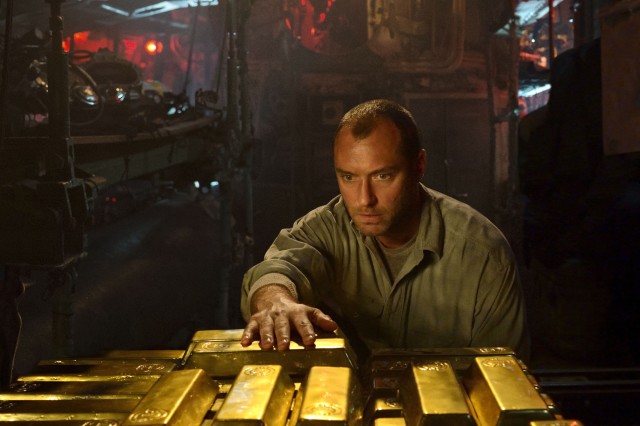 A tough, exciting adventure flick, Black Sea balances its old-fashioned genre elements with well-drawn characters and packs in a healthy amount of thrills and spills. Director Macdonald makes full use of the claustrophobic environment, a sealed tin can deep underwater in which testosterone bubbles over and one small mistake could jeopardise everyone on board. Sure, the logic isn’t 100% waterproof, but on the whole, this is a sturdy, well-built vessel.