Earth’s mightiest heroes boldly step forth into a new age in the closing chapter of the Marvel Cinematic Universe’s second phase. The Avengers, comprising Tony Stark/Iron Man (Downey Jr.), Thor (Hemsworth), Steve Rogers/Captain America (Evans), Bruce Banner/Hulk (Ruffalo), Natasha Romanoff/Black Widow (Johansson) and Clint Barton/Hawkeye (Renner) have unfinished business to attend to. Loki’s sceptre is being held in a Hydra stronghold, and in the process of retrieving the otherworldly weapon, the team confronts the twins Pietro (Taylor-Johnson) and Wanda (Olsen) Maximoff, the products of Hydra genetic enhancement experiments. Stark and Banner have an experiment of their own, the artificial intelligence system Ultron (Spader), intended as a security net for the world. However, the sentient robot has nefarious plans of its own, violently rebelling against its creators. The Avengers’ only hope may lie in Vision (Bettany), an old friend in a new form.

2012’s The Avengers was a monumental event, the glorious apex of Marvel Studios’ diligent world-building. Now, the Marvel Cinematic Universe has truly earned the right to call itself a “universe”, Age of Ultron uniting a multitude of familiar faces while introducing new players. There’s the welcome feeling that the gang’s all here, but not just for the sake of it. This is a significant achievement on multiple levels; writer-director Joss Whedon taking on the Herculean challenge of topping the first Avengers film while charting a course forward for all of these characters. Once again, Whedon demonstrates a remarkable command of the tone, peppering the screenplay with delightfully zippy witticisms (Stark references playwright Eugene O’Neill and the practice of Prima Nocta) yet establishing the stakes and delivering genuine drama when it is required. 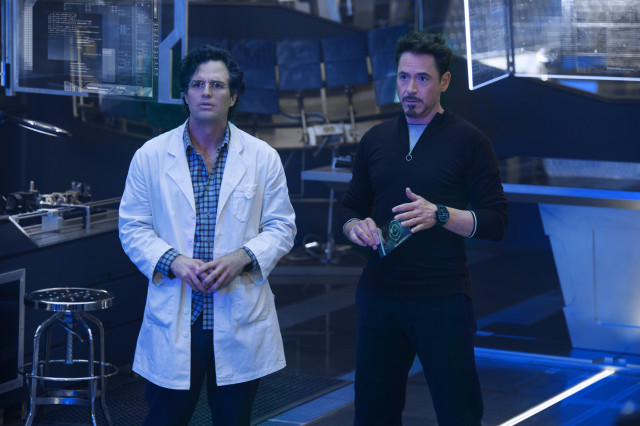 What stands out as the most impressive element of this blockbuster isn’t the wham-bam spectacle, it’s the character development. While many action movies are marketed as being “character-driven”, more often than not, the plot seems like a minor inconvenience at best, fiddly bits of story standing in the way of stuff blowing up. This isn’t the case here. Whedon cleverly builds upon the relationships established in the previous films, including the “science bros” bond between Stark and Banner and the dysfunctional family dynamic within the team as a whole. Whedon is unafraid to have sizeable stretches of the film driven solely by drama or comedy in between the action, without the movie feeling like it’s spinning its wheels until Hulk next smashes something or Cap tosses his shield. The conflict has its place, there is angst but not moping and the bristling tension that arises from disagreements within the team is balanced with the sheer satisfaction of seeing our heroes work in conjunction with each other.

This is not to say that the spectacle is in short supply – far from it. This is a major tentpole release that was guaranteed to do gangbusters even before a single word of the screenplay was written, but if Avengers: Age of Ultron is anything to go by, producer Kevin Feige and the folks at Marvel Studios are not about to rest on their laurels or just let these movies “make themselves”. The film’s opening, which involves the Avengers storming Baron Von Strucker’s (Thomas Kretschmann) mountain fortress, reintroduces viewers to our heroes in the thick of it with a slick, unbroken long take. There’s also a fair bit of globe-trotting, the story taking the team from their home base in New York to the fictional Eastern European city of Sokovia, South Africa and South Korea.

The movie’s signature set piece is the battle between Iron Man in his heavy-duty Hulkbuster armour and the Hulk. Stark is reluctant to fight Banner, shading the knock-down drag-out brawl with more emotional hues than a typical beat ‘em up. The climactic showdown, while familiar in the sense that it’s the plucky good guys against a horde of bad guys while trying to get innocent citizens to safety, is sufficiently different from the “big fight in a big city” finales that have become the norm in the Marvel Cinematic Universe.

After defeating Loki, the Avengers’ primary adversary in this sequel is the titular Ultron, voiced by James Spader, who also performed some motion capture work to play the 8 foot tall robot. Ultron is both a physical and intellectual challenge to the Avengers and his motivations are set up quickly and efficiently. Malevolent artificial intelligence is something of a hoary sci-fi trope and one could argue that 2001: A Space Odyssey’s HAL 9000 still stands at the top of the heap, but Ultron certainly fulfils all the big bad pre-requisites. Spader is a casting coup; his sonorous, supercilious line delivery both threatening and entertaining. There’s also the appeal of the “I’ve got no strings” motif, even more amusing given that Robert Downey Jr. is rumoured to be playing both Geppetto and Pinocchio in an upcoming live-action version of the story. 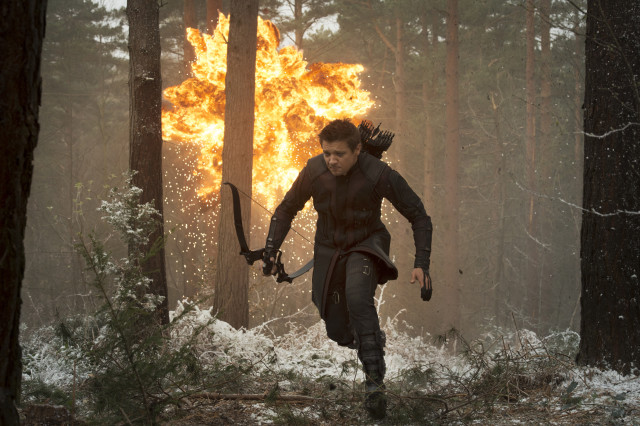 Whedon has put admirable effort into improving the characterisations we were presented with in the first film. Hawkeye in particular gets his moment in the sun; Renner having voiced his disappointment that the character spent most of the first Avengers under Loki’s mind control. Paul Bettany finally steps out of the recording booth to play cyber-butler JARVIS’ corporeal form, Vision, lending the character an elegant combination of strength and serenity. 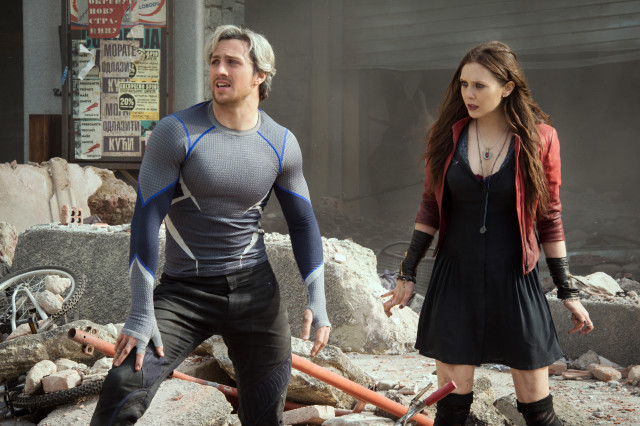 The character of Scarlet Witch, with her ability to play dangerous mind games as she enters into the memories and feelings of those under her thrall, presents the audience with an opportunity to explore the deepest, darkest fears of our heroes. Elizabeth Olsen is a haunted, ethereal presence as Wanda, her powers taking their own toll on her psyche. The hallucinatory scenes also shed light on Black Widow’s past, these unsettling sequences feeling straight out of a horror movie.

Much was made about how Fox’s X-Men: Days of Future Past beat Marvel Studios to the punch when it came to putting speedster Quicksilver on the big screen. While Aaron Taylor-Johnson’s Pietro doesn’t quite have a bit as memorable as the “Time in a Bottle” kitchen run from DoFP, his Quicksilver is still pretty cool. The bond between the twins is conveyed convincingly by both Taylor-Johnson and Olsen. Mark Ruffalo continues to be an excellent Bruce Banner, this film showing how the character is at once Dr. Frankenstein and Frankenstein’s Monster and the inner turmoil that results from this dichotomy. There’s also a romance between Banner and Romanoff which can feel a little forced at times but is for the most part really quite sweet. A scene early on in which Black Widow tries to calm the savage beast reminded this reviewer of the interaction between King Kong and Ann Darrow.

It pains us a little to say this and we don’t want to come off as dismissive of the efforts of the army of visual effects artists who slaved away on this film, but the CGI does border on the excessive. It’s not sloppily done and there are a mind-boggling number of visual effects shots, but at times during the Hulkbuster vs. Hulk fight, the two computer-generated characters going at it seem like just that, as if one were playing a video-game. Still, this is a minor quibble and if the film were nothing but pixel-heavy battles, then we’d have a problem. Instead, we have a compelling, dramatic story, characters that are fleshed-out and easy to get invested in, plenty of morsels for hard-core fans and lots of quotable lines and some imagery courtesy of cinematographer Ben Davis that’s destined to become iconic. While there is no post-credits stinger, there is a tag after the main-on-end titles sequence that’s as tantalising as ever. Bring on Phase 3!

Summary: Avengers: Age of Ultron can boast that it’s about the Avengers as characters and Joss Whedon’s ability to deliver excellent dialogue and moving storytelling in addition to earth-shattering spectacle remains unparalleled.