Jack Neo’s films have, for better or worse, been largely critic-proof. Despite being consistently savaged by critics, they have excelled at another barometer of quality far more important to its financiers: box office receipts. His brand of sentimentalism and neat moral ideas, despite being shallow and in your face, often finds a way to worm its way into the hearts of many a Singaporean. Many of them would go on to be commercial hits. 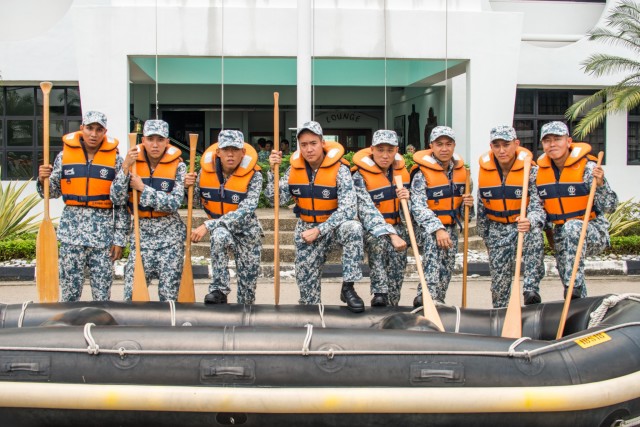 So it goes with Ah Boys to Men 3: Frogmen, the third film in the franchise about the coming of age of a bunch of young men, through the grueling process of conscription and national service. It’s a wholly unnecessary sequel, mimicking the exact same formula of the first two films, and it’s everything you would have come to expect from a Jack Neo film: sporadic funny gags that are mostly drowned out by endless pep talks, moral “lessons”, and exploitative, tear-baiting scenes. And it has already broken the box office records of its predecessors.

Returning to the franchise are familiar characters – Ken Chow (Joshua Tan), the spoilt, rich kid, with an over-protective mother; Aloysius Jin (Maxi Lim), the stickler for rules, whose over-enthusiasm creates more problems for his cabin mates; and Lobang (Wang Weiliang), the street-smart hustler, out to make a quick buck off his cabin mates. Joining them is new face Hei Long (Wesley Wong), an aggressive gang leader, who prefers to talk with his fists instead of his mouth. Together they must brave 40 weeks of training, and of course, with their disparate personalities, conflicts eventually arise. 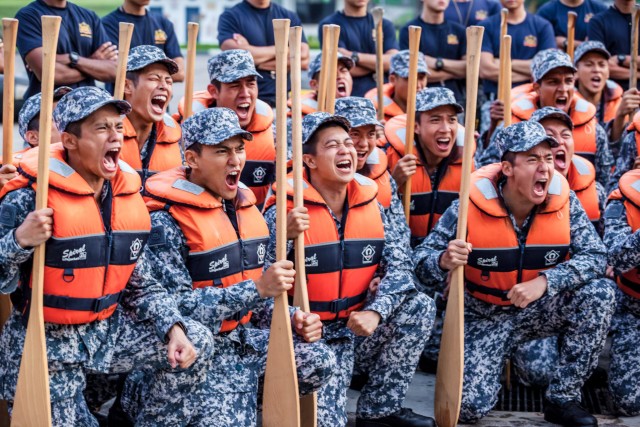 This time round, the film takes place in the Naval Diving Unit (NDU) – an elite unit that takes in only the fittest recruits – instead of Tekong. It’s merely a cosmetic change, though; nothing strays from the structure of the previous films.

The opening of the film, following in the footsteps of Ah Boys to Men 1, is a “what if” situation that imagines our national security in peril. Instead of a war, we get a terrorist attack on a local ship. In swoops the NDU, with our protagonists in tow, swiftly saving the day. Like Ah Boys to Men 1, the only discernible purpose that the opener serves is to exalt militarism – which is, really, what the films are about. Nothing like military heroics shot in slo-mo to stoke one’s patriotic fervour! 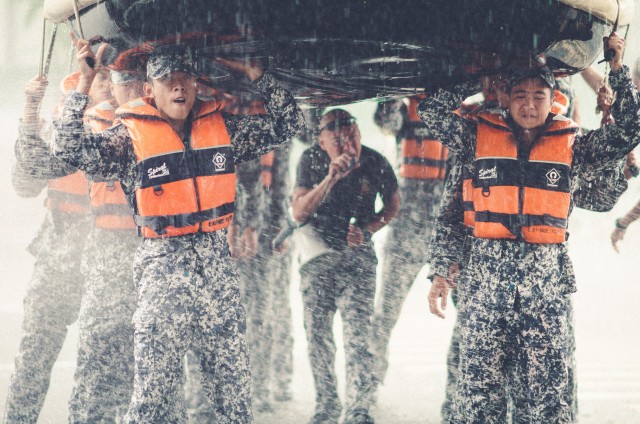 Ah Boys to Men 3: Frogmen is very much the propaganda fest that the first two films were, and it likewise peddles the latters’ insufferable preachy-preachiness and obtrusive product placements. Every conflict that’s somewhat interesting ends, frustratingly, in a moral lesson. (Kill your bad attitude! Submit yourself! Serve the nation!) Product placements get shoehorned into the film via scenes of little consequence to the story.

Fortunately, characters get a little meat added to them this time round, with significant scenes given to Ken, Aloysius and Lobang to better develop their characters. And yet, they still feel wanting. Ultimately, they are easily reduced to the stereotypes described in the plot synopsis (spoilt kid, gangster, nerd, etc.). That needn’t necessarily be a bad thing in an ensemble show like this one, if Neo could have wholeheartedly embraced those stereotypes and played them up for laughs; instead, he feels the need to contrive some sort of character arc for all of them. Instead of focusing on the comedy that their clashing personalities could bring (which he mostly only does with Aloysius), copious screen time is devoted to Big Talk Moments, in which characters, through a conversation with other characters, learn the error of their ways. Once they decide to change, everything ends well for all them – this is a Jack Neo film after all – so hurrahs are exclaimed and hugs are exchanged by the film’s end. 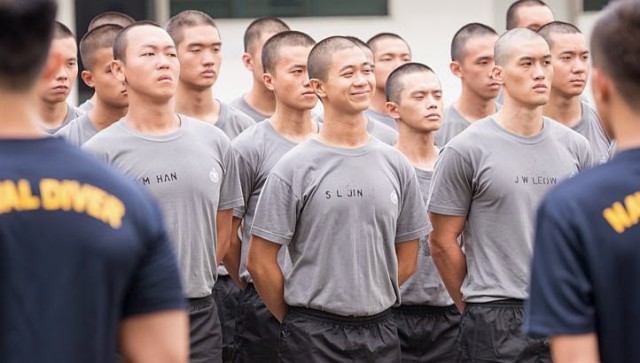 A lot has been said about how Ah Boys to Men 3: Frogmen is the best film in the franchise, with the best writing and the best acting. That much is true. That it is only marginally better written than its predecessors, though, is hardly cause to celebrate. Sure, there’s no denying the allure that Neo’s films exerts on Singaporean heartlanders; if anything, many of us have shown that we are suckers for nostalgia, melodramatic excess, and happily-ever-afters. But there’s something disingenuous – even insidious – about the Ah Boys to Men films when they, like a sledgehammer, pound us with the message to love and serve our country, without any room given to introspection and self-examination. Why should we defend our country? Why should we love Singapore? There are a million reasons why, but Neo hardly scratches the surface when it comes to broaching these vital questions. Instead, for the third film in a row, he regurgitates the same old moralistic spiel about “brotherhood” and “family” and “self sacrifice”.

Neo possesses an uncanny knack for potent sentimentalism, so you will laugh at parts of Ah Boys to Men 3: Frogmen, and you may even cry. But while that sentimentalism was less problematic (and arguably effective) in some of his earlier, less politically charged films, here it only serves to soften your critical faculties, so that you’ll buy into the film’s shallow ideas. Ah Boys to Men 3: Frogmen is propaganda of the most shameless variety, and it’s disturbing how many of us have lapped it up.

Summary: Funnier than the previous ABTM movies, but still overly sentimental and preachy.