Pierce Brosnan strutted his “older man of action” stuff recently in The November Man and now Liam Neeson, the definitive “older man of action” of the moment, is at it again in A Walk Among the Tombstones. Neeson plays Matt Scudder, a former NYPD cop, now an unlicensed private detective and a recovering alcoholic. Drug dealer Kenny Kristo (Stevens) engages Scudder’s services when his wife is kidnapped and killed even after he’s paid the ransom. While doing research in the library, Scudder befriends homeless teenager TJ (Bradley), whom he takes under his wing. Scudder discovers that the psychopaths responsible are targeting young women related to figures in the drug world, knowing they would be unable to go to the police for help. Working outside the law, Scudder must prevent the serial killers from striking again. 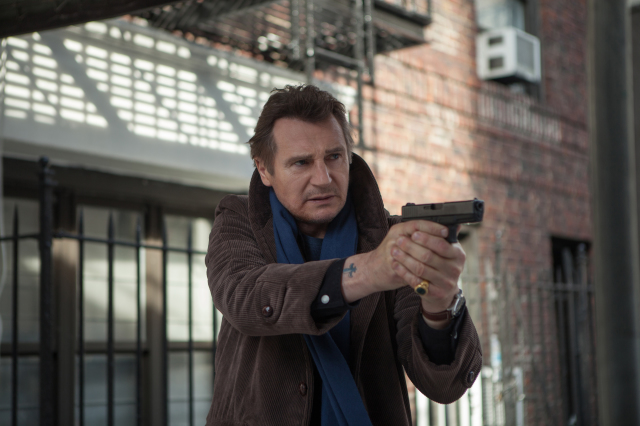 A Walk Among the Tombstones is adapted from the 10th book in Lawrence Block’s long-running Matt Scudder series (there are 17 books now). Jeff Bridges played Scudder in 1986’s heavily panned and largely forgotten 8 Million Ways to Die and this film has been in the works for quite a while, with Joe Carnahan attached to direct and Harrison Ford to star at one point. Writer-director Scott Frank’s realisation of A Walk Among the Tombstones is slick, stylish and foreboding, lean and effectively chilling. At times, it seems reminiscent of David Fincher’s work, if more pedestrian. A slow-motion sequence in which the killers leer at a young girl walking her dog, set to Donovan’s “Atlantis”, is a very darkly comic touch. The book was published in 1992, but Frank chooses to set it in 1999, hinting at Y2K paranoia with the symbolism of people being “afraid of all the wrong things”, as the tagline goes. This doesn’t seem to add a lot to the story but it is an interesting textural detail. 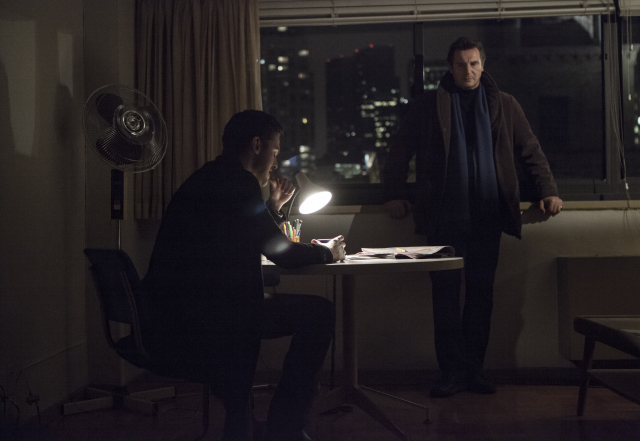 However, beyond the look and feel of the film, the story is a pretty conventional one. Yes, the serial killer antagonists are very creepy, but it’s nothing you haven’t seen before in dozens of police procedural or detective TV shows. They drive around in a van, kidnapping women to torture and kill and they’re unbalanced and evil – not exactly a unique or compelling situation for our hero to be up against. It’s a good thing then that our hero is Liam Neeson, a master at the art of being quietly intimidating. He’s effortlessly cool throughout the film and you’ll want to cheer when he snarls “are you listening, motherf***er?” through the phone at the kidnappers. More than that, it’s entertaining to watch Neeson’s Scudder just doing some old-fashioned sleuthing about, cleverly cajoling information out of various subjects. Neeson is sufficiently low-key and yet never seems like he’s sleepwalking through the film. He also has the approval of author Block, who thought Neeson would make the ideal Scudder since watching him in Michael Collins. 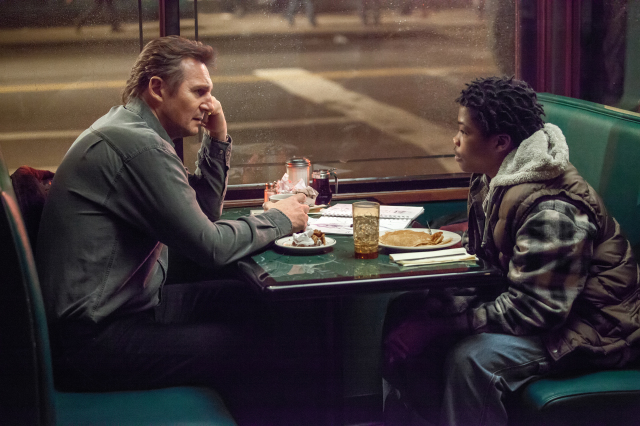 Less conventional than its main “catch the kidnappers” plot is the relationship between Scudder and tagalong kid TJ. TJ could have very easily been unbearably irritating and Brian “Astro” Bradley did get on many nerves as a contestant on American X Factor. However, he holds his own opposite Neeson and their interactions lend the film a slight hint of dry levity without the character being “the comic relief”. There’s some sentimentality there too, TJ stricken with sickle cell anaemia, having nowhere to go and drawing superheroes in his sketchbook. The scene in which Scudder chastises TJ for picking up a gun he found in a dumpster is particularly well done and a discussion about cool detective names displays a self-awareness of the genre without it being obnoxious.

Some fans of Liam Neeson have bemoaned that since Taken, the Oscar nominee has starred in a string of run of the mill actioners that don’t particularly test his abilities as an actor. A Walk Among the Tombstones puts less emphasis on the running and the shooting -though there is some of that, to be sure. While the role of Matt Scudder isn’t wildly different from the cool tough guys we’ve become accustomed to seeing Neeson play, there is more here for Neeson to sink his teeth into and this film certainly is more of a grown-up, intense, sometimes disturbing thriller than his more action-oriented movies. And isn’t it nice that the novel’s original name was preserved instead of the title being changed to some snappy synonym for “vengeance”?

Summary: Liam Neeson fans will want to take this walk, his lead performance as the old-school detective and the creepy atmospherics making up for the familiar narrative.