Every one of you reading this must have watched at least one Disney movie. If not, I’m just going to say: “Awww, poor thing.”

Truth of the matter is, it’ll be a really sad thing if you haven’t seen a single Disney movie. ‘Cause they accompanied me – and I believe they did the same for many of you too – in my growing years, and on many occasions through tired times as well.

I’ve gotten into the guilty habit of popping their aspirin-like films into my video player ever so often – from the VHS format in my kiddie days to the Blu-rays of the new generation. The Mouse House’s myriad of animated characters never fail to brighten my day, or night. And the songs…

This month, here at the house of, erm, F***, we decided to put not one but two Disney films on our cover. Not together, but as two separate covers – Frankenweenie and Wreck-It Ralph. And we think they mightily deserve it!

Directed by Tim Burton, Frankenweenie is a feature-length remake of the 1984 live-action short of the same name, produced during his tenure as a young animator at Walt Disney Studios, his first job… For which he was sacked shortly after! Of course, Burton has gone on to achieve huge successes and has since collaborated numerous times with the very same company that sacked him. After grossing more than a billion dollars for Disney with Alice In Wonderland, it seems especially sweet that Burton is back with them for this project. Turn to page 46 for our exclusive interview with him in L.A.! 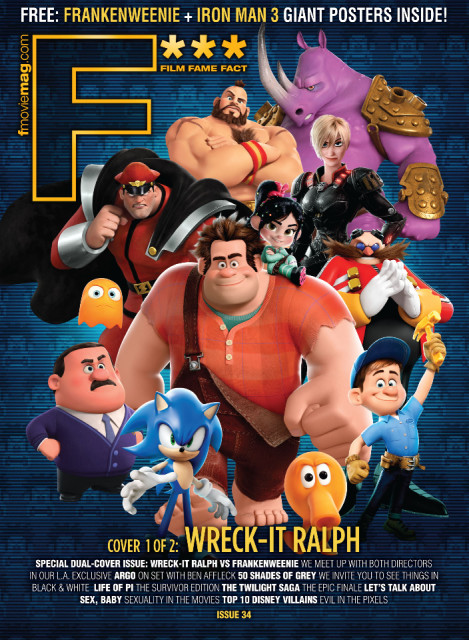 The other Disney movie that’s sharing centre stage this month is Wreck-It Ralph, a hilarious, arcade-game-hopping adventure by Rich Moore in his feature directing debut. According to Moore, the idea behind Wreck-It Ralph boiled down to one thing: free will – and how arcade-game characters have none. He reveals more of the ideas and inspirations behind the movie on page 28.

In keeping with the grand theme of all things Disney, we’ve also decided to give a bit of recognition to the studio’s unsung anti-heroes – how can we even resist the poor evil baddies of the animated world? Check out our Top 10 Disney Villains on page 38.

There’s so much more to say but we’re running out of space so here’s the gist of what’s inside this feature-packed issue – there’s the interview with new kid on the block Suraj Sharma for Lee Ang’s Life of Pi, page 60; our set visit of Argo with Ben Affleck, page 22; our tribute to Tim Burton’s black-and-white Frankenweenie with 15 more similarly toned films in 50 Shades Of Grey, page 54; our recap of The Twilight Saga, page 66; and our look at sexuality in the movies in Let’s Talk About Sex, Baby, page 72; and so much more…

Last but not least, Skyfall, the 50th anniversary film of the 007 franchise opens this month too. We hear the film’s co-writer, John Logan, has been asked to take on solo scripting duties for the next movie in the Bond franchise – and he’s reportedly pitched an ambitious two-parter to Bond producers. Daniel Craig is signed on for two more films, so it’s perfectly possible for the head honchos to give Logan the green light for this ambitious undertaking. We’ll keep you posted on plot details once they emerge! In the meantime, check out our very positive review of the film on page 88.

Enjoy the issue, and see you at the movies!