“All kinds of weather, we stick together/The same in the rain and sun” – so crooned Rosemary Clooney in the song Sisters from White Christmas. In this movie, comedy duo Amy Poehler and Tina Fey play Maura and Kate Ellis respectively, sisters who return to their childhood home in Orlando after many years. The sisters’ parents (Wiest and Brolin) have decided to sell the house, much to both daughters’ chagrin. The freewheeling Kate coaxes Maura into helping her throw one last blowout party at their house, affectionately nicknamed “Ellis Island”. The many guests who show up include James (Barinholtz), a handyman whom Maura has developed a crush on; slacker Dave (Leguizamo) and his drug dealer Pazuzu (Cena), socially-awkward jokester Alex (Moynihan) and Kate’s high school nemesis Brinda (Rudolph). As the bash spirals out of control, Kate’s teenage daughter Haley (Davenport) learns of her mother’s irresponsible behaviour and with her grandparents, attempts to intervene.

The mechanics of Poehler and Fey’s double act are well-oiled to the point where they could rival Crosby and Hope in their heyday. From Weekend Update and the Sarah Palin vs. Hillary Clinton sketches on Saturday Night Live (SNL) to Baby Mama and their stints hosting the Golden Globes, the comediennes have repeatedly brought the funny. Sisters is directed by Pitch Perfect’s Jason Moore, from a screenplay by Paula Pell, whose credits include SNL, 30 Rock and Bridesmaids. The supporting cast consists mostly of actors who are SNL alums or are part of the wider circle of comedians Poehler and Fey know. A good portion of the jokes hit their target, but there’s the hard-to-shake sense that the film leans too heavily on Poehler and Fey’s pre-existing rapport, instead of actually generating funny scenarios for their characters to participate in. 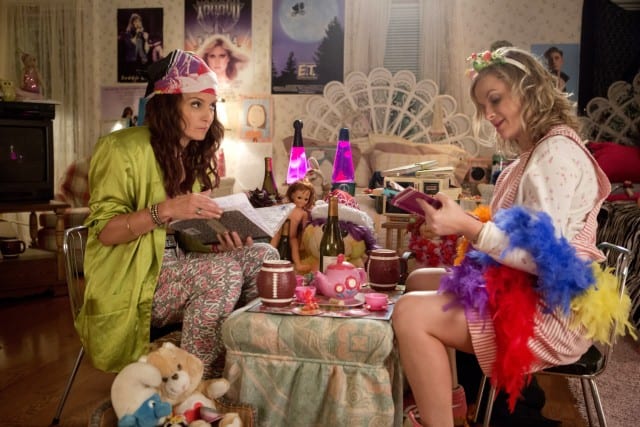 Sisters is an entry in the “I don’t want to grow up (I’m a Toys “R” Us kid)” comedy subgenre. There’s a reason characters who are unwilling to move on from their teen years are referred to as “man-children”, because that’s mostly the dudes’ domain. It does riff on the Will Ferrell and John C. Reilly two-hander Step-Brothers, without the over-the-top rivalry. There are multiple points in Sisters where it feels like the film is flailing about, yelling “hey, girls can do stupid stuff too!” The vulgarity and gleefully reckless behaviour plus the mix of sentimentality and sweetness come off as very sub-Bridesmaids. The climactic comedic set piece is unexpectedly ambitious and there’s a gag involving a ballerina music box that will make audiences cringe, chuckle and clench, but there are significant portions of the film during which it’s spinning its wheels.

If asked to categorise the two per an old buddy movie archetype, most audiences would pick Fey as the strait-laced one and Poehler as the party animal. Sisters flips the script and Fey gets multiple opportunities to make a scene and blurt out strings of cuss words. Poehler’s Maura does exhibit the “chipper to an annoying extent” trait she’s brought to her roles in Parks and Recreation and Inside Out. Barinholtz’s character is sweet, funny, capable and is very much a “dream guy” archetype but points for not casting an Abercrombie model in the part. Wiest and Brolin are also entertaining as the Ellis sisters’ parents, in part because they’re not necessarily actors one would expect to show up in an over-the-top comedy. 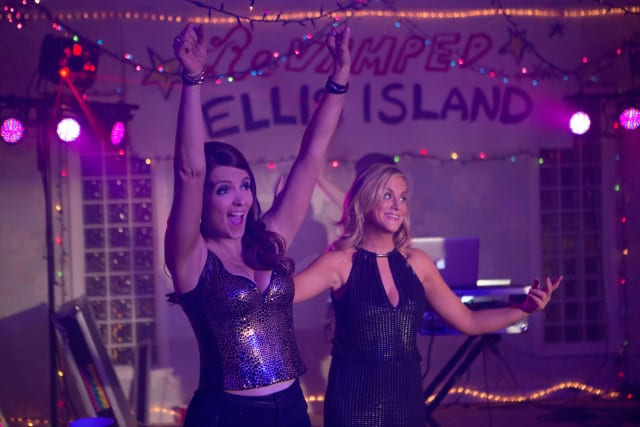 The partygoers are all one-dimensional, playing it up for laughs. Greta Lee shows up as nail salon technician Hae-Won, a character who’s supposed to deconstruct racist Korean stereotypes but ends up reinforcing them, depending on how sensitive one is to the issue. The character’s broken English further makes things uncomfortable and clumsy. Similarly, a group of lesbian women who show up to the party are portrayed as stereotypically masculine, dressed in denim and plaid and wielding power tools. It’s a disappointing lack of sophistication, especially since writer Pell is an openly gay woman herself. John Cena has wisely capitalised on his status as an internet meme and is proving that he has a knack for comedy, perhaps not unlike Mark Wahlberg and Channing Tatum.

The chemistry that Poehler and Fey share is the foundation on which the movie is built; it’s a shame the rest of the construction materials aren’t quite up to snuff. It certainly could have been tighter, sharper and more focused, but it is ultimately difficult not to be swayed by Poehler and Fey’s performances even if they aren’t working with the best material.

Summary: It’s far from the best use of Poehler and Fey’s talents and it tends to go for the obvious, easy jokes, but Sisters narrowly passes muster thanks to the duo’s irresistible chemistry.