We all have our own answers. But then again, wouldn’t you agree that our answer changes according to the situations we’re in? There are definitely times when we wished we were invisible; to fly; or even to read minds.

Of course, the greedy in us would also have thought of getting one of those “I wish for three-million more wishes” and do the X-Men‘s Rogue or Heroes‘ Sylar where we could collectively absorb the power of any superhero that comes our way.

Let’s say you get to do that, what would you then do? Protect the World? Control the Universe? Rob the bank and live happily after? Show off? Or all of the above? Okay, we are digressing. But think about it.

Well, this month, we have Green Lantern on the front and the ‘Eiffel Tower’ at the back. [evil laughter] Oh come on, it’s the superhero issue and if you’re reading this, chances are you’re either a fan, a superhero wannabe, a researching superhero-killer, or you’re stalking me. Whatever the case, there’s bound to be something super-heroic in this issue for everybody.

There’s Green Lantern the movie and there’s the actor Ryan Reynolds who plays him. Read the on-set piece and the sickening (yes, we’re jealous) guy’s interview inside.

Then there’s part two of our super huge coverage of X-Men: First Class, where we talk to Michael Fassbender, who plays future super-villain Magneto, and a string of other super mutants. 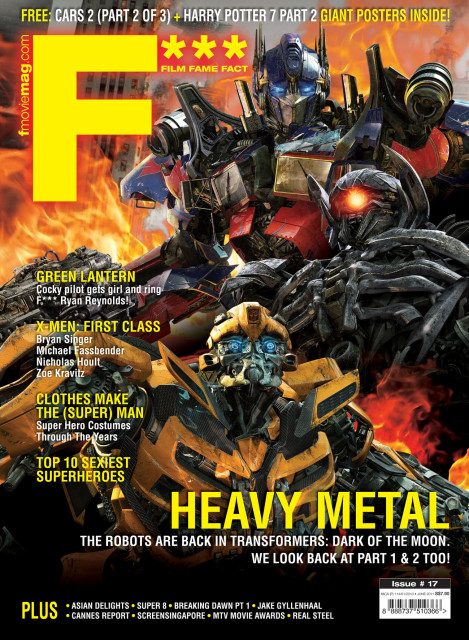 There’s also the super robots of Transformers: Dark of the Moon, where we introduce you to some new metal aliens. While at it, we also refresh your memory on the first two prequels. Turn the mag around to start.

And there’s also the all-too-sexy superheroes, and their costumes; superhero movies on DVDs and soundtracks; and what have you.

So stop stalking me and go enjoy the issue.