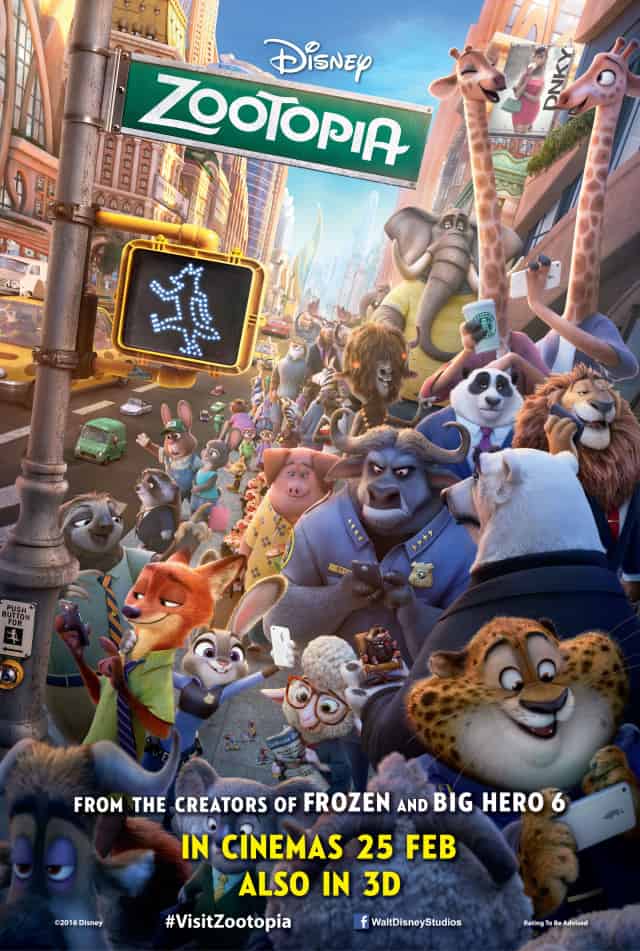 Cat Stevens told us “baby, baby it’s a wild world”, and the makers of this animated film have taken this to heart. In a world populated entirely by a variety of anthropomorphic mammals, Judy Hopps (Goodwin) is a principled, spirited young rabbit from Bunnyburrow. She has her heart set on becoming a police officer, even though her parents (Hunt and Lake) would prefer her to become a carrot farmer like them. Hopps gets inducted into the Zootopia Police Department, but Chief Bogo (Elba) has little faith in her abilities. While on the case of a missing otter, Judy crosses paths with Nick Wilde (Bateman), a red fox con artist. They have to overcome their natural animosity to work together in solving a spate of mysterious disappearances, as societal tensions between “prey” and “predators” bubble over.

Zootopia’s marketing campaign seemed to indicate a film that might be too cutesy for some audiences’ tastes, appearing like it would serve up an endless parade of anthropomorphic animals performing adorable, amusing antics. To this reviewer’s surprise, Zootopia ends up far deeper than it initially appears, gamely and sensitively tackling the themes of prejudice and tolerance in the context of an animated family film. Directors Howard, Moore and Bush tread very fragile ground and ensure that Zootopia doesn’t come off as preachy or painfully on-the-nose in delivering its message to impressionable kids. At the same time, there’s plenty of wit and visual invention on display and the liveliness of the presentation helps ease the audience into the surprisingly mature allegory at the heart of the film.

Walt Disney Animation’s entirely computer-animated films got off to a rocky start with Chicken Little and Meet the Robinsons, the studio still firmly stuck in Pixar’s looming shadow. With the likes of Wreck-It Ralph, Frozen and Big Hero 6, suffice it to say that things have improved. The army of animators involved in breathing life into Zootopia have done a marvellous job, with impeccable fur textures and environmental effects in every frame. The characters are expressive, with just the right blend of human and animal traits combined to sell the anthropomorphism. There is a thoroughness to the way the world has been conceived, with a distinct animism to the architecture and plenty of clever visual gags emphasizing how animals of drastically different scales and sizes co-exist in the same milieu. With the pop culture allusions that include winks at The Godfather and Breaking Bad for the parents in tow, there’s a degree of Dreamworks-ness at work here, but it’s not necessarily a bad thing.

This is essentially a buddy cop movie, of the “one’s a cop and one’s not a cop” subset. It sticks very closely to established tropes: our hero is a kind-hearted but tough straight arrow, her foil is a charming rogue lacking in scruples, the police chief is unconvinced that the rookie has what it takes, colourful characters including organised crime elements show up and there’s a mystery to unravel. Even though Zootopia is comprised of familiar story components, the setting does lend it a freshness.

Goodwin, who has a connection to Disney in the form of starring as Snow White in the TV show Once Upon a Time, gives Judy an eagerness that never crosses over into being annoying. She’s literally wide-eyed and bushy-tailed. Bateman is a dab hand at the smooth talker shtick, but there’s more to Nick than his conman façade and Bateman and Goodwin deliver some moving emotional beats. Elba’s unmistakable baritone is always a joy to listen to, and this year, we’ll also get to hear his voice work in The Jungle Book and Finding Dory.

Veteran voice actor Maurice LaMarche turns in a side-splitting Marlon Brando impression as Mr. Big, the arctic shrew mafia don. This reviewer was worried that Shakira’s presence as the pop star Gazelle would be too gimmicky, but the character is used judiciously and her main appearance is in a musical number during the end credits. Some big laughs come courtesy of Raymond S. Persi, who voices the sloth Flash. Kristen Bell has a vocal cameo as Flash’s colleague Priscilla, a fun inside joke seeing as Bell is famously, endearingly obsessed with sloths.

There’s certainly more than meets the eye with Zootopia. While it’s perfectly enjoyable on the level of an animated adventure comedy with the jokes flying at a steady pace, it also eloquently and thoughtfully comments upon issues of race and diversity, without feeling like it’s merely hopping on some kind of social justice bandwagon. The self-aware comedy sometimes veers into Shrek territory, but pop culture references only account for a portion of the humour. While not on the same level as last year’s Inside Out, Zootopia does a commendable job of packaging challenging themes for younger audiences without being condescending or tripping up over itself.

Summary: Entertaining, funny, visually engaging and thought-provoking, Zootopia is so much more than silly talking animals.