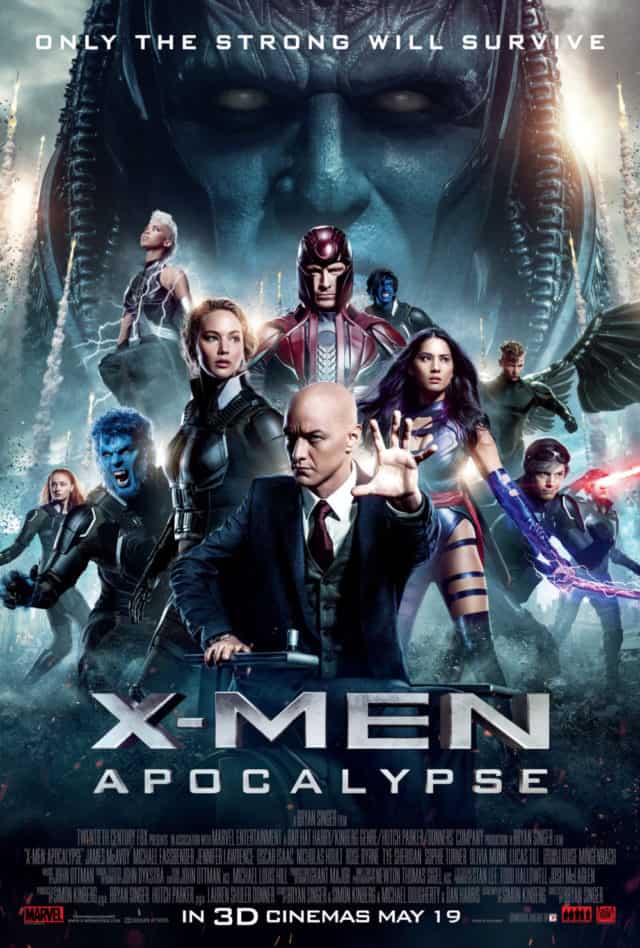 It’s hard to fault anyone for approaching X-Men: Apocalypse with optimism. 20th Century Fox has consistently failed the Fantastic Four, but they’ve had a better track record in recent years with Marvel’s mutants. We’ve been #blessed with Bryan Singer’s Days Of Future Past, a brainy, bold thrill ride that uses its myriad characters to excellent effect in telling a time-twisted tale of doom and… well, apocalypse. Tim Miller’s snarky, wacky Deadpool proved without a doubt that the studio is willing to take a risk on a cult property and let it explode all over the silver screen, rather than neuter it out of hand. With Singer back on board and a top-notch cast, hopes are understandably high for the cataclysmic confrontation suggested by the title of this latest entry in the X-Men franchise. 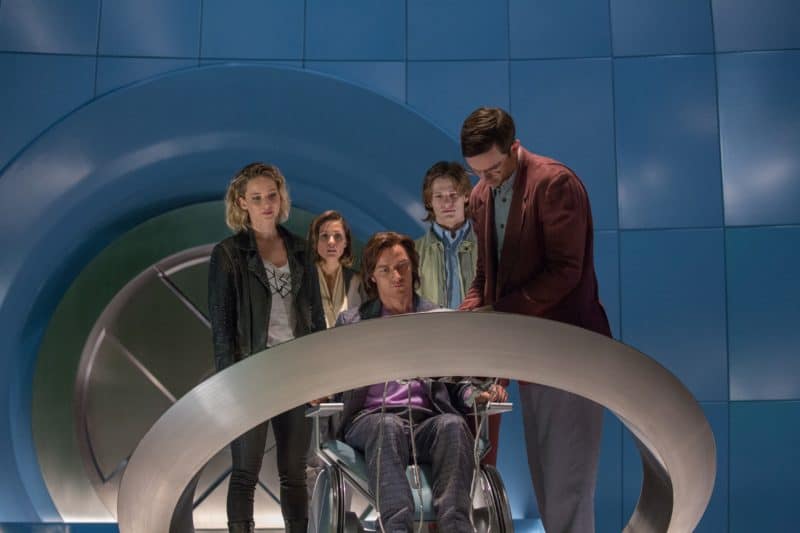 We’re even promised the holy grail of X-Men villains: ancient mutant Apocalypse (Oscar Isaac, buried under too many layers of make-up and prosthetics). This righteous blue-hued dude, with his huge but poorly defined power-set, is an iconic antagonist for our band of superheroes in the comics: he’s been known to lay waste to Earth in the past, present and future. In Singer’s incarnation, Apocalypse’s four Horsemen include wing-tipped Angel (Ben Hardy); weather witch Storm (Alexandra Shipp); energy-blade-wielding Psylocke (Olivia Munn); and a bitter, broken Magneto/Erik Lensherr (Michael Fassbender). 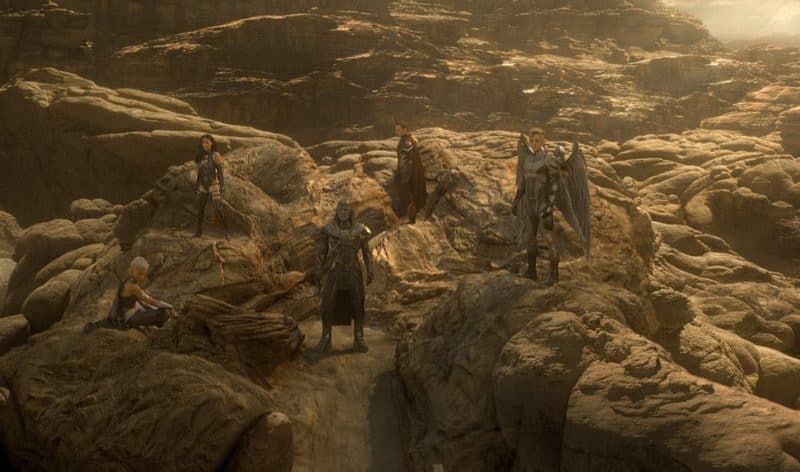 It’s up to Professor Charles Xavier (James McAvoy) and his X-Men – superpowered students that include younger versions of uber-powerful Jean Grey (Sophie Turner) and Cyclops/Scott Summers (Tye Sheridan) – to stop Apocalypse from claiming the entire world for himself. Along the way, shape-shifter Raven/Mystique (Jennifer Lawrence) must decide just how she can best contribute to the mutant cause in which she so firmly believes. 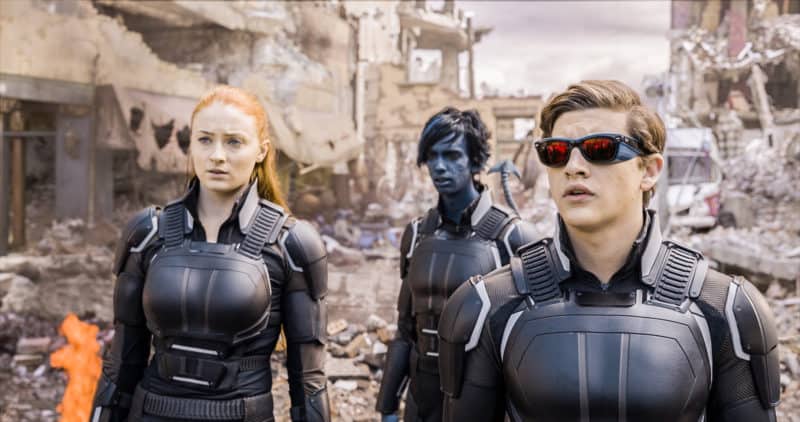 Here’s the thing: keep your expectations low – lower – lowest – and X-Men: Apocalypse may just pass muster. This is a cookie-cutter blockbuster, sliced and diced together with more efficiency than heart. It dutifully ticks boxes as it chugs along: Apocalypse recruits his acolytes. Magneto loses his heart and soul (again). Charles and Raven discuss and disagree on tactics. Superheroes face off. It’s all strung together with several sequences of world-destroying action, filmed in true Roland Emmerich style. 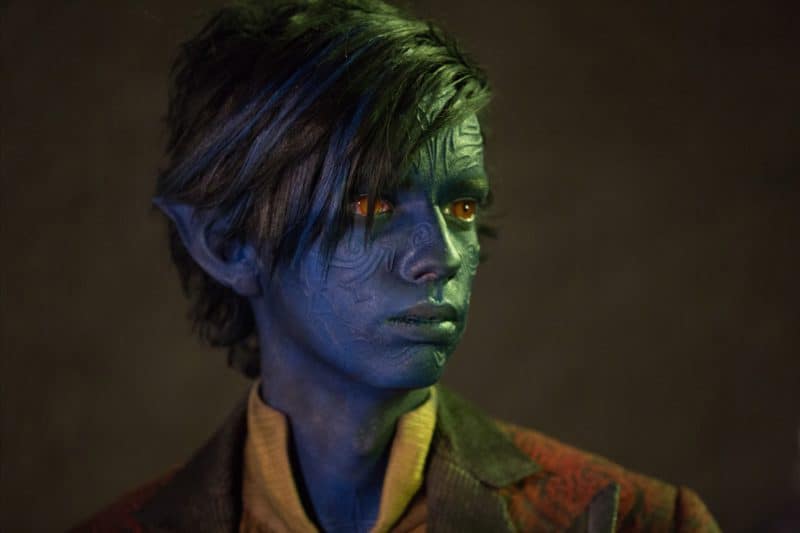 Devotees of both the movies and the comics will find things to enjoy: a twitchy, endearing young Nightcrawler (Kodi Smit-McPhee), who looks very much like a demon but is deeply devout; another deeply amusing explosion of special effects as fan favourite Quicksilver (Evan Peters) zips through a hilarious rescue mission; and an already publicised cameo by Wolverine (Hugh Jackman) that will drive fans berserk. 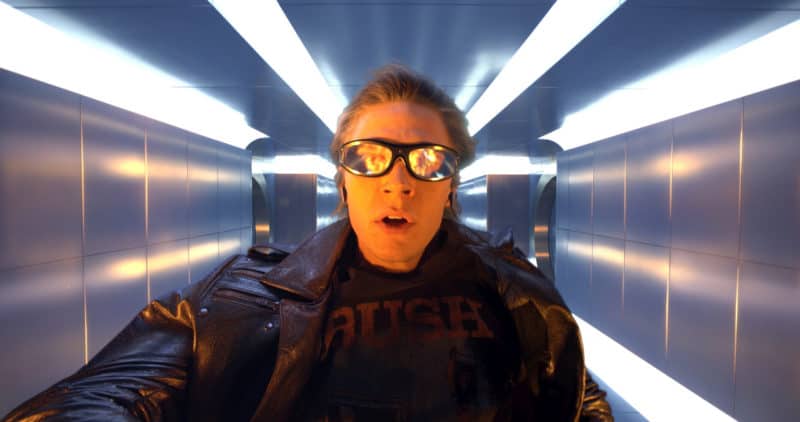 But think a little harder or poke at its shaky plot, and X-Men Apocalypse falls apart quite readily. The truth is that much of this film is neither inspired nor inspiring. It’s okay, for the most part, but it’s never great, and barely ever good. Simon Kinberg’s script is a limp affair, recycling bits that worked better in other movies in the franchise but breaking very little new ground. The stakes are insanely high, but the threat never feels genuine – a feeling that is only reinforced by the clumsy and anti-climactic way in which the final showdown takes place. Can we say deus ex machina? Yes, we can. 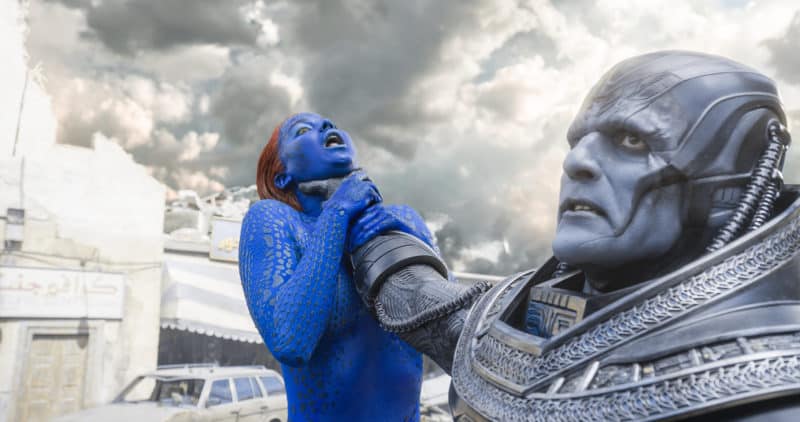 The character work that lends so much emotion and power to earlier installments like First Class and Days Of Future Past is missing here too. Too much of the story relies on emotional connections that aren’t established too well, and which can only be supplied by the viewers themselves. The film meanders without much purpose through its many relationships, staging a series of first meetings or reunions that basically amount to: Jean and Cyclops meet cute! Charles and Moira MacTaggert (Rose Byrne) meet cute! Raven and Hank McCoy (Nicholas Hoult) meet cute! 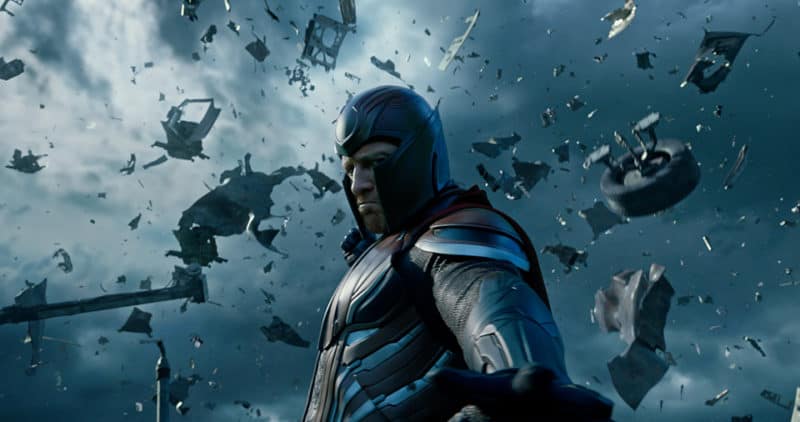 But very little of it sparks to life, and there’s a troubling disregard for female agency, too, that fuels Magneto’s entire emotional arc in this film. We’re also told why Moira disappeared in between films, but she’s not given any time to forgive what she has had to forget.

At least Singer’s cast does good work with what little they are given. As a re-energised Charles, McAvoy is as appealing and charming as ever. Fassbender remains a gift to the franchise: he imbues Erik with the perfect blend of heartbreak and hatred, which serves as a potent reminder of why he makes a far better antagonist than the automaton-on-evil-autopilot that is Apocalypse. In the context of the film, Lawrence delivers a decent performance. But it’s still hard to shake the feeling that she’s miscast in the role, with her explosive star power prompting the filmmakers to transform Raven into someone pretty much unrecognisable to comic readers. 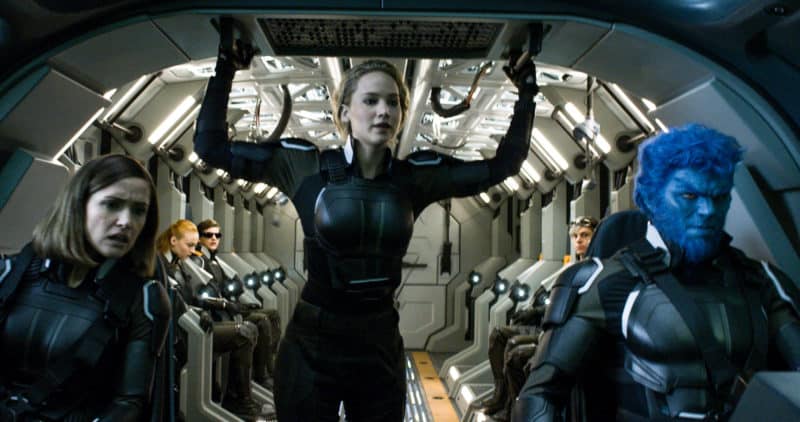 In just eight years, the genre that was once treated as the difficult bastard stepchild of the movie industry has come fully into its own. It’s only May and we’ve already seen three superhero films hit cinemas – Captain America: Civil War: excellent; Deadpool: awesome; Batman v Superman: awful. This latest installment in the X-Men franchise falls on neither extreme. It displays a couple of flashes of brilliance, but not enough to drag it out from the uncomfortable middle ground of mediocrity it occupies. Here’s hoping Singer (if he signs on to direct) and Kinberg find their footing again with the inevitable follow-up to X-Men: Apocalypse – we’ve already been told that it will be set in the ’90s, with a rather obscure end-credits scene teasing just where the franchise will go next.

Summary: The latest X-Men film isn’t completely dreadful, but you may be tempted to cancel the Apocalypse after watching it.