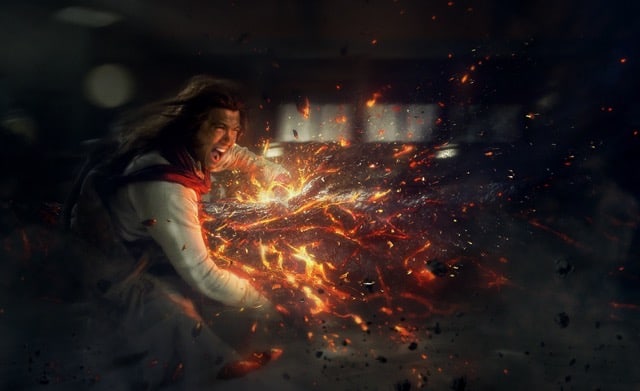 Based on the popular novel of the same name, Wu Kong 《悟空传》 is an action-fantasy directed by Derek Kwok 郭子健. The veteran director has worked with many superstars such as Donnie Yen (Kung Fu Jungle, 2014), Ekin Cheng (Full Strike, 2015), and Nicholas Tse (As the Light Goes Out, 2014). He also co-directed Journey to the West: Conquering the Demons (2013) with Stephen Chow.

Eddie Peng 彭于晏 leads the star-studded cast as the legendary Sun Wu Kong. He has been part of several box office successes, including Rise of the Legend (2014) and Operation Mekong (2016) ― the latter considered to be one of China’s highest-grossing films.

Ni Ni 倪妮, who plays his love interest, won ‘Best Newcomer’ and ‘Best Actress’ at the Asian Film Awards and Shanghai Film Critics Awards respectively for her debut film, The Flowers of War (2011).

Shawn Yue余文乐, known for romance-comedy Love in a Puff (2010) alongside Miriam Yeung, is expected to be Sun Wu Kong’s rival in the film. He reunites with Director Kwok since As the Light Goes Out and The Moss (2008).

Watch the trailers below.

Sun Wu Kong (Eddie Peng), born on the Huaguo Mountain, has a heart of stone. A powerful general from Heaven, known as Hua Ji, aims to terminate him. Fortunately for Wu Kong, he is rescued by Bodhi and becomes his pupil.

Yang Jian (Shawn Yue) is offered an opportunity to become a strong God. However, there is a heavy price he needs to pay ― he must kill the daughter of the Heaven Emperor’s rival. Meanwhile, Tian Peng (Oho Ou), Hua Ji’s bodyguard, is secretly ordered to investigate Wu Kong.

The three of them enter the Heaven school together, and their lives begin to change……