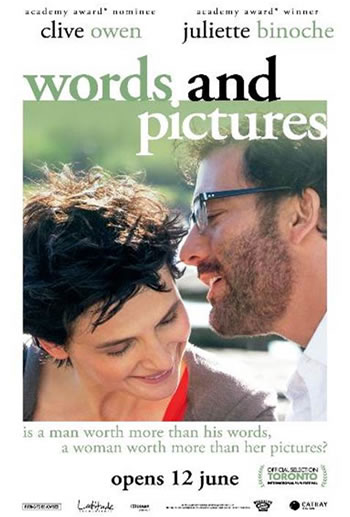 It’s a rare film that manages to be tedious and fascinating at the same time, but that’s precisely what happens with the clumsily-named and executed Words And Pictures. The film’s central conceit is right there in its title: a battle for supremacy unfolds between an English teacher (words) and his new colleague, who schools students in the fine arts (pictures). It shouldn’t work at all, especially when the relationship moves predictably into romantic territory. But it’s tough to completely dismiss the film when its awkward screenplay also features two intriguing central characters, played with subtle, almost miraculous depth by Clive Owen and Juliette Binoche. 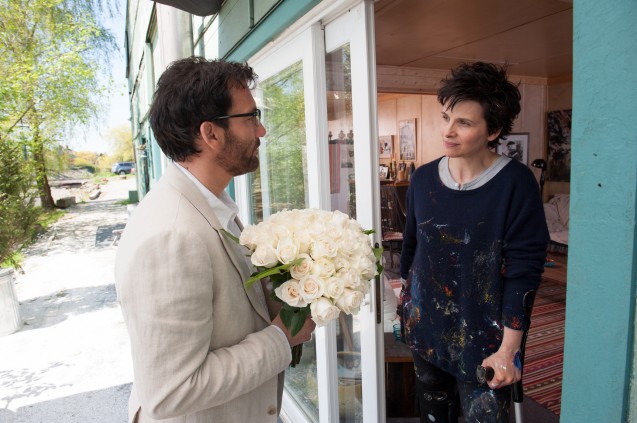 English teacher Jack Marcus (Owen) is on the brink of academic implosion: his job is on the line, he’s barely making it to his classes on time, and he’s drinking a little too much for anyone’s comfort. But, just as things are looking really bleak, his downward trajectory is briefly interrupted by the arrival of Dina Delsanto (Binoche), a revered artist who’s losing her ability to make art as her body is increasingly ravaged by the aches and pains of rheumatoid arthritis. She values imagery and art; he treasures words and literature – their clash fires up their students’ imaginations, even as they bicker and spar their way into an evident mutual attraction.

There’s no denying that the film rests on an awkward foundation: the script keeps returning to the ridiculous dichotomy it establishes between words and pictures, pitting Marcus against Delsanto in a competition that makes very little sense. It’s all tied up with a subplot involving shy arts student Emily (Valerie Tian), whose ability to come out of her shell to be the artist she can be is all wrapped up with issues of sexual harassment and public humiliation. Frankly, it’s just not very good.

What is very good about the film is its two central characters, and the spiky, difficult and joyfully equal relationship that springs up between them. There’s so much depth, sadness and maturity layered into Marcus and Delsanto that it’s absolutely fascinating just to watch them in action, together and apart. Both characters have rough edges that aren’t sanded away, and the odd fireworks between them work precisely because both their lives have stalled: Marcus is a charming mess who lost himself somewhere along the way; Delsanto is a brilliant artist who can no longer express herself the way she wants to. Somehow, they wind up inspiring each other to do better and be better – and, instead of feeling horribly mawkish, it works.

That’s due in no small part to the excellent work done by the two lead actors. Owen sinks thoroughly into the part of Marcus, dialling up the charm and the horror of his character in equal measure. The film doesn’t soften or romanticise Marcus and his problems, which gives Owen plenty of great character stuff to do. Binoche, too, has ample room to uncover the sad, yearning soul of a whip-smart, independent woman whose illness has stolen not just her art but also a little of her dignity.

Ultimately, the fantastic and fascinating interplay between the two actors and characters are pretty much worth the price of admission. They’re surrounded by an odd, awkward beast of a movie, built on a very shaky foundation. But their brave, deep performances and bittersweet chemistry come very close to making Words And Pictures worth a lot more than it really is.