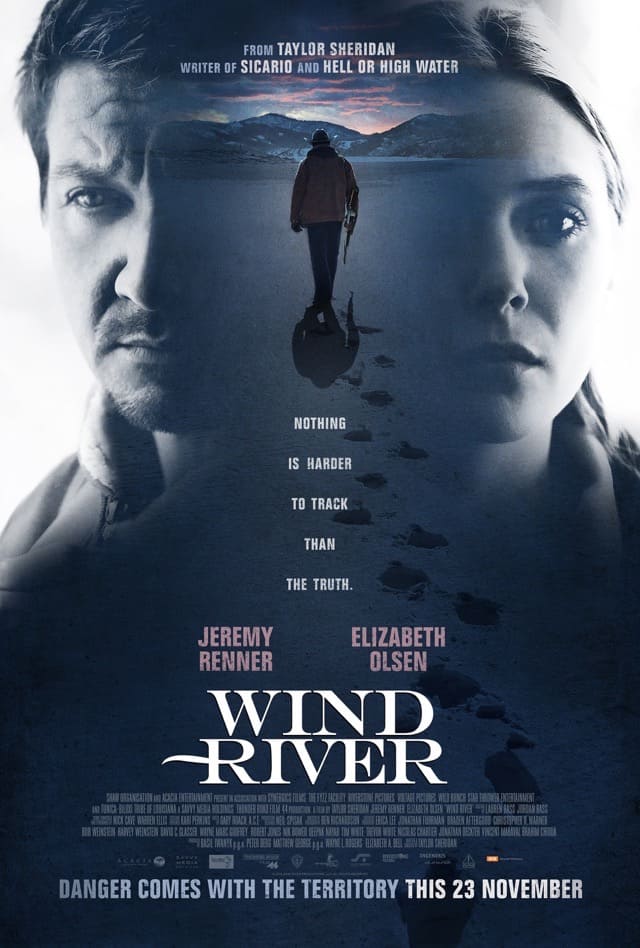 Starting off slow and mysterious, Wind River doesn’t tell you much until way later, after you’ve invested a considerable amount of attention and thought into both the characters and the plot. The film slowly unravels the mysterious death of an eighteen-year-old native American girl, Natalie Hanson (Kelsey Chow), investigated by rookie Federal agent Jane Banner (Elizabeth Olsen) and Fish and Wildlife Service agent Cory Lambert (Jeremy Renner). And it does so, intriguingly and well-paced.

Taylor Sheridan, the writer for huge hits such as Sicario (2015) and Hell Or High Water (2016), doubles up as director. Where most crime thrillers fall flat, Wind River impresses. Without spoiling too much, the plot hinges on the uncertainties that lie before both the characters and the audience; making each new clue that our characters discover more peculiar than the last. The audience is never ahead of the characters, which make every plot development all the more convincing and satisfying.

Renner’s portrayal of a broken father whose missing daughter always nags at his soul, is not excessively emotional but just enough to warrant his motivation to join the case. What’s more, Natalie is the daughter of his close friend Martin (Gil Birmingham), who he treats as his own daughter. Behind every cold face is a warm heart, as the saying goes.

Olsen is beautiful and remarkable as Jane, who is not embarrassed to ask for help from Cory, an expert tracker and hunter of his terrain. We don’t get to see much of her soft side but her subtle actions and expressions sell Jane as a passionate agent with the people’s best interests at heart.

We also don’t get to see much of Natalie until much later in a flashback, which makes the mystery all the more captivating. Natalie and her boyfriend Matt (Jon Bernthal; who played Shane Walsh in The Walking Dead), a security officer at a drilling site, took up no more than 15 minutes of the film’s screentime to make you fall for their short yet sweet performances.

Strangely, the audience is shown a series of text about the non-existent statistics of missing native American women before the credits roll. While the revelation adds some flavour and depth to the film, it sticks out like a sore thumb in what was sold as a mere crime thriller. Nevertheless, Wind River is backed with technical excellence and near-flawless storytelling delivered by stellar performances, leaving audiences in awe as they leave the cinema.

Summary: A seemingly lost art in most crime thrillers nowadays, Wind River is satisfying and convincing in that the audience is never ahead of the characters as the plot slowly unravels.