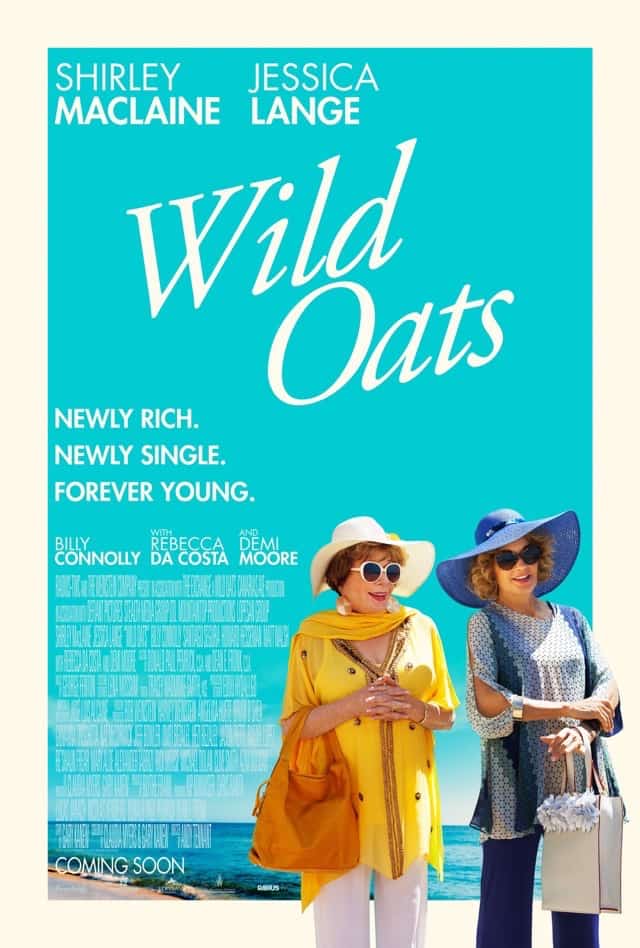 Girls just want to have fun, and there’s no age limit on that. Illinois residents Eva (MacLaine) and Maddie (Lange) have been best friends for 40 years. When Eva’s husband passes away, the insurance company Beneficial Life mistakenly pays out $5 million to Eva instead of $50 000. After Maddie convinces Eva to keep the money, the pair jet off to the Canary Islands where they splurge on hotel suites, shopping and run amok at the casino. Eva is approached by a charming but absent-minded Scottish businessman (Connolly) while Maddie enters into a dalliance with the young, handsome Chip (Hayden). In the meantime, Beneficial Life agent Vespucci (Hesseman), on the brink of retirement, is tasked with retrieving the money. Accompanied by Eva’s daughter Crystal (Moore), Vespucci heads to the Canary Islands in pursuit of Eva and Maddie. As it happens, the insurance firm is the least of the women’s worries when they get caught up in a scam orchestrated by local wine baron Carlos (Segura).

There are movies which have a far more intriguing story going on behind the scenes than the one portrayed on screen. Wild Oats is one of those movies. The film was first announced in 2012, and in that incarnation, the protagonists travelled to Las Vegas instead of the Canary Islands. This looks like an unassuming indie movie, but the troubled production was unable to secure financing, with stars MacLaine, Lange and Moore all deferring their salaries. Jack Black, Jacki Weaver, Sarah Jessica Parker and Alan Arkin were all attached, but departed the project, as did director Howard Deutch. One of the producers would only put down the money on the condition that his girlfriend Rebecca Da Costa was given a substantial part. Director Andy Tennant had to hold the fort and persuade the cast to stick with him. In the end, Wild Oats didn’t even secure a theatrical release in the U.S., premiering on TV on the Lifetime Channel. All this became fodder for MacLaine’s book, Above the Line. A documentary on the making of the film probably wouldn’t be quite as dramatic as Hearts of Darkness, which chronicled the torturous Apocalypse Now shoot, but then again, that was a Vietnam War epic and this is a frothy buddy comedy.

So, was it worth all the trouble? The end result is largely agreeable but wholly unremarkable, often playing like a paid holiday. It’s not as egregious as Last Vegas, but it struggles to be anything more than a mildly amusing trifle. There is plenty of charm courtesy of MacLaine and Lange’s interaction, but the thin characterisation doesn’t stretch much further than “one’s sensible and strait-laced while the other’s libidinous and fun-loving” – no prizes for guessing who plays which archetype. There are too many predictable ‘old people’ jokes, including an extended sequence in which Eva and Maddie get frustrated with the automated messages when they call the insurance agency. A Chinese man speaking heavily-accented, halting English also shows up briefly – this character is wholly extraneous to the plot.

Wild Oats greatly benefits from neither of its two leads phoning it in – one could surmise they’d be tempted to do so if they had to defer their salaries. Both MacLaine and Lange are immensely talented, radiant screen presences who complement each other nicely, and Lange does seem to be having a ball of the time playing a foxy woman on the prowl for younger men. Connolly gives an endearingly silly comic performance – it might look like the film is mocking the character’s dementia, but there’s an explanation given later on. Hesseman is sympathetic when it would have been very easy to make the insurance agent trying to get the money back into a moustache-twirling villain. Moore does a great amount of over-acting, while Segura’s Carlos is entirely unintimidating – that’s supposed to be the joke, but it greatly lowers the stakes.

Wild Oats is too over-the-top and silly to be a realistic comedy, but is too subdued to be a full-on farce, though it veers close to the latter during its conclusion. As a wish fulfilment lark for the Tony Bennett fan demographic, Wild Oats isn’t a complete mess. It’s occasionally funny and while the performances given by MacLaine and Lange are far from their most memorable, they’re adequately entertaining.

Summary: The movie equivalent of that doddering grandaunt who goes off on rambling tangents, but who’s so sweet you don’t have the heart to tell her to stop.