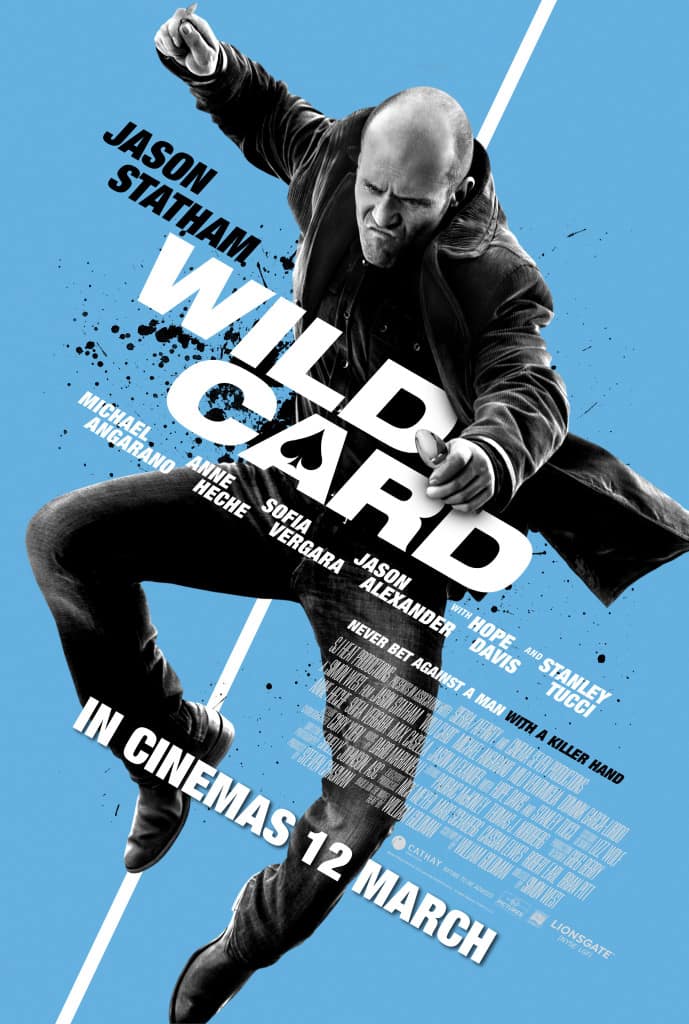 If we were rich and famous and had our pick of any contemporary action star to be our bodyguard, we’d probably go for Jason Statham (if Dwayne Johnson were unavailable). In Wild Card, the Stath plays Nick Wild, a Las Vegas “security consultant” for hire. Young self-made millionaire Cyrus Kinnick (Angarano) procures Wild’s protection while he enjoys a night out on the town gambling. In the meantime, Wild’s ex-girlfriend Holly (García-Lorido) is dumped outside a hospital, having been beaten and raped and left barely alive. Wild somewhat reluctantly goes after the man responsible, gangster Danny DeMarco (Ventimiglia). Wild loathes Vegas, feeling trapped within the seedy confines of the city, and hopes to win big at the tables so he can cash in and move away to Corsica, leaving Sin City behind. 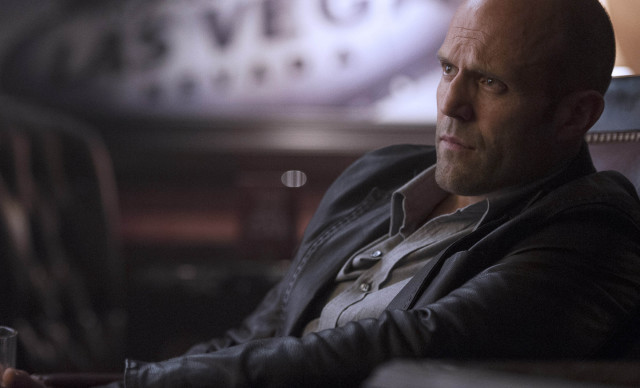 Wild Card is based on the book Heat, by nigh-legendary novelist and screenwriter William Goldman, whose credits include Butch Cassidy And The Sundance Kid and All The President’s Men. The book was the basis for a 1986 film starring Burt Reynolds. Goldman’s involvement seems to suggest that this just might be more than your run-of-the-mill Statham action vehicle.

It’s different enough from typical Statham action fare, but not in a good way. Here’s the Catch-22 – most audiences are tired of the Brit playing the same character over and over again, and yet, there’s also the comfort of knowing what you’re getting when you go to see a Jason Statham picture. Even if it’s mediocre – which they often are – at least there’ll be some cool stunts. Despite being marketed as an action movie, the fights in Wild Card are few and far between, with no big set-pieces whatsoever. Zero explosions, nobody hanging off the side of a hotel balcony, not even a car chase. 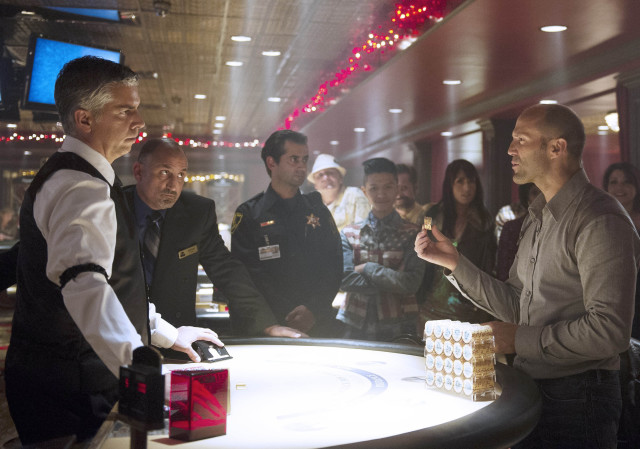 Wild Card purports itself to be “character-driven”, which is becoming something of a buzz-phrase for action movies. There just isn’t enough to the Nick Wild character to help him stand out from the “cool heroes with impossibly awesome names” pack. The film stays purposely ambiguous on his backstory – he was probably in the military in some capacity, not that it really matters. There are glimmers of character development: he’s the man about town and knows everybody in every corner. But there just isn’t anything really distinctive to Nick and, at the end of the day, audiences want to see Jason Statham wrestle bad guys, not wrestle with a gambling compulsion. 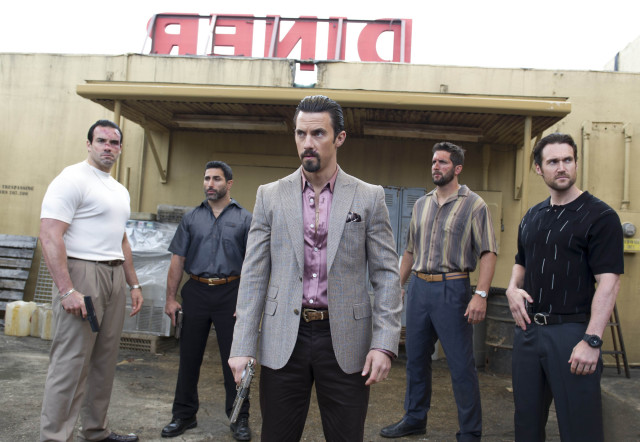 There have been several disposable action flicks wherein the saving grace is a memorable, scenery-chomping villain. No such luck here. Instead, we get Ventimiglia trying his best to be some shade of intimidating, which he doesn’t succeed at. As the tagalong kid, Angarano is the dweeby semi-comic-relief, a sheltered rich kid who looks up to Nick for his toughness and swagger. There is an attempt to develop the relationship between the two characters but it fails to truly become anything interesting. There are several recognisable actors who pop up, but they do so for one scene each. Hi Sofia Vergara; bye Sofia Vergara. Hi Jason Alexander; bye Jason Alexander. Hi Stanley Tucci; bye Stanley Tucci. Of course, it is Tucci who makes the most impact, playing big-time Vegas crime boss “Baby” with his usual charisma. The female characters don’t amount to very much either: Anne Heche plays a waitress and Hope Davis plays a croupier. Dominik García-Lorido is the victim-turned-Black-Widow, adding a dash of noir to the proceedings. There is one scene that will make all the men in the audience subconsciously cross their legs. 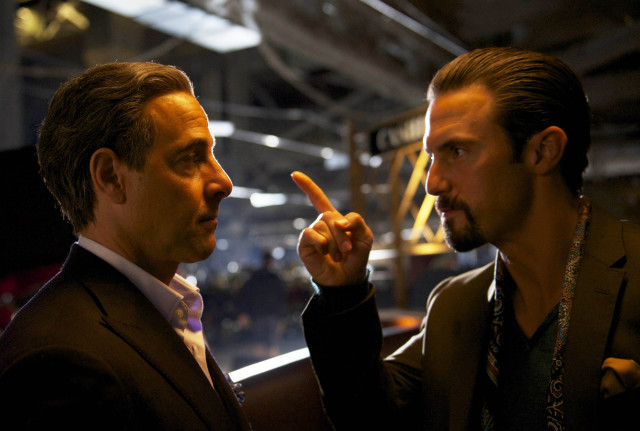 Wild Card reunites Statham with Simon West, who directed him in The Mechanic and The Expendables 2. West is known for his bombastic action films and his forays into dramatic thriller territory such as The General’s Daughter are not well-regarded. There are many moments in Wild Card that made this reviewer think, “This could make for a really cool TV show”. West consciously shies away from depicting Vegas as shiny and glamorous, instead embracing the seedy underbelly – and yet, he is obviously not the first director to give the town this treatment. There is one moment of striking symbolic imagery, with close-ups of a sewing needle piercing a cross-stitch Holly is working on as she recounts her sexual assault at Danny’s hands. Still, West can’t salvage this Jason Statham action movie that wants to be a Jason Statham drama but half-heartedly throws in a few punches and kicks just because it has to. 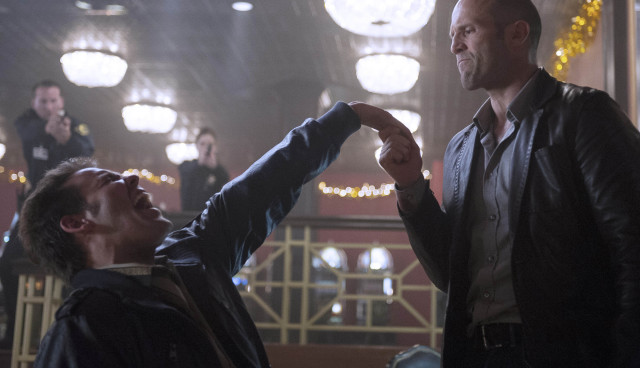 Summary: Wild Card is an episodic crime drama focusing on an uninteresting character, rather than the action flick it’s advertised as. By the time Jason Statham takes on a bunch of thugs armed only with a butter knife and a spoon, it’s too little too late.