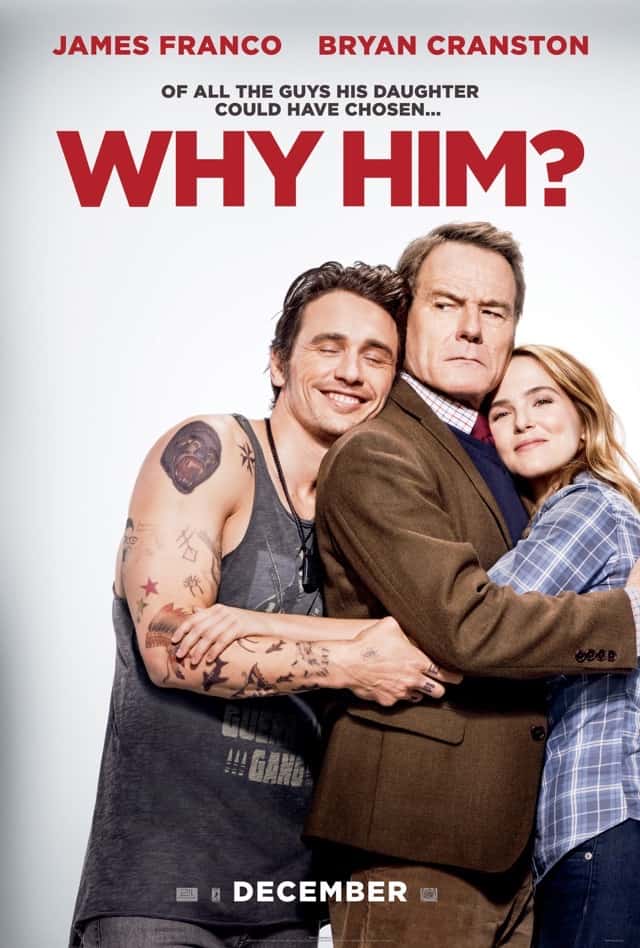 It’s every father’s nightmare: your daughter falls in love with (dramatic pause) James Franco. The father in this case is Ned Fleming (Cranston), who owns a printing company in Michigan. While studying at Stanford, Ned’s daughter Stephanie (Deutch) falls for Laird Mayhew (Franco), a Silicon Valley billionaire. Laird invites Ned, his wife Barb (Mullally) and their son Scotty (Gluck) over for the holidays. Ned is shocked by Laird’s over-the-top antics and lack of a filter, creating endless awkwardness. Ned flies into a panic when Laird tells Ned his plans to propose to Stephanie. As the rest of the family begins to warm to Laird, Ned takes drastic measures to prevent Laird from becoming his son-in-law.

Why Him? is directed and co-written by John Hamburg, who co-wrote the Meet the Parents series of films. There’s not a lot of originality in the premise of Why Him?, which pits a strait-laced dad against a free-spirited, outrageous potential son-in-law. The film’s brand of humour is crass and unsophisticated, awash in scatological jokes and an abundance of coarse language. Why Him? also possesses several traits seen in many recent big studio comedies, such as falling back on celebrity cameos for laughs, and attempting to offset wanton ribaldry with sweetness. However, it is frequently funny, thanks to extremely effective casting.

Cranston has proven to be a gifted performer in both comedic and dramatic roles. Even when doing as little as looking aghast or wringing his hands, Cranston is a thoroughly entertaining presence. Ned is a boring family man: to hammer this home, we see that his 55th birthday party is being held at an Applebees restaurant. He’s also expectedly protective over his daughter. The ways in which Ned and Laird come into conflict are mostly predictable, but Cranston doesn’t phone it in at all here.

We’ll come right out and say it: Franco has a reputation for being at least a little weird. He’s an Oscar-nominated multi-hyphenate with a prolific list of credits both in front of and behind the camera, but he can’t help being the target of parody and accusations that he’s an attention-seeker. This seems like a part that’s tailor-made for Franco, and he has great fun with the goofy role. Franco and Cranston share palpable comic chemistry, and they power through the hackneyed jokes and toilet humour to deliver the laughs.

Deutch is an exceedingly appealing actress, it’s just a pity that she’s popped up in so many cringe-inducing comedies as of late. As with Cranston and Franco, this is casting that just works. Deutch looks sensible and intelligent, so we’re meant to question “why him?” alongside Ned. Since the bulk of the movie is about Ned and Laird’s rivalry, it means that Deutch’s part isn’t as substantial as it should be. Mullally and Gluck are good as Ned’s wife and son respectively. Mullally gamely works her way through a scene in which Barb, high on marijuana, aggressively comes on to Ned (that’s not how weed works). Scotty is business-savvy and focused on self-improvement, but is swayed by the lavish trappings of Laird’s lifestyle all the same.

Why Him? pokes fun at Silicon Valley excesses via Laird’s contemporary art collection, his parties deejayed by Steve Aoki, fancy-pants haute cuisine served up by Top Chef alum Richard Blais, and a Siri-like smart home system named Justine, voiced by Kaley Cuoco. While material like this is done much better on HBO’s Silicon Valley, there are still laughs to be had from the culture shock that Grand Rapids native Ned experiences when confronted with Laird’s California tech elite lifestyle. Keagan Michael-Key steals the show as Gustav, the German-accented manservant who springs surprise attacks on Laird so Laird can improve his self-defence skills.

Why Him?’s lowbrow jokes are punctuated with semi-inspired visual gags and even though some of the set pieces go on for too long, the acting is just enough to sustain in. The subplot of Ned’s I.T. guy Kevin Dingle (Zack Pearlman) having a creepy, perverse obsession with Stephanie that’s played for laughs is particularly distasteful.

Why Him? is far from the best use of its talented cast and its cynicism and crassness won’t sit well with some audiences, but it’s almost as funny as it is stupid. We mean this in the best way possible.

Summary: Inelegant and vulgar but entertainingly acted by its excellent cast, Why Him? showcases energetic performances overcoming a tired script and some tasteless jokes.