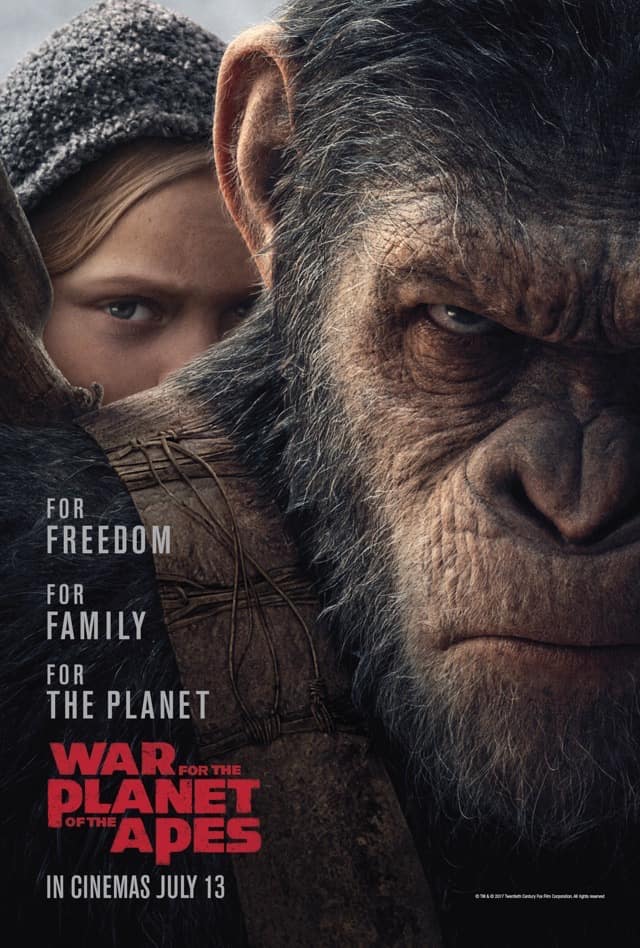 In the third entry of the Planet of the Apes reboot series, Caesar (Serkis) wages his most personal battle yet. It is two years after the events of Dawn of the Planet of the Apes, and the ape population has been dwindling due to a protracted war with the humans. When Caesar’s wife Cornelia (Greer) and younger son Cornelius (Devyn Dalton) are kidnapped by humans, Caesar heads into enemy territory to rescue them. He finds himself face-to-face with Colonel McCullough (Harrelson), a nigh-psychotic soldier hell-bent on obliterating the apes for good. McCullough and his men are assisted by apes who were followers of Caesar’s late rival Koba, and who defected to the side of the humans for fear of reprisal from Caesar. Maurice (Konoval), Caesar’s advisor and confidant, adopts a young orphaned human girl named Nova (Miller). Maurice, Nova, Rocket (Notary) and ‘Bad Ape’ (Zahn) scope out McCullough’s encampment, looking for a way to liberate the apes who have been captured and enslaved. As humanity and apes make what each perceive to be their last stand, Caesar is in danger of being consumed by vengeance and hatred, and going down the path Koba did.

The Apes reboot films have set a high bar for any reimagining to follow. Reboots are often viewed as hollow, money-grubbing exercise, but Rise of the Planet of the Apes more than made an excellent case for its existence. Then, Dawn topped that, and the third instalment in the trilogy upholds that standard. This is an intense experience – it’s a war film, and more specifically, a prisoner-of-war film. Director Matt Reeves and screenwriter Mark Bomback have listed Bridge on the River Kwai as an influence, and the film cuts through its fantastical elements to deliver a searing, haunting drama.

In 2011, 2014, and now in 2017, Apes movies were released shortly after Transformers movies, almost as if to function as antidotes. It’s good to have a reminder of just how good and how powerful a well-made blockbuster can be. There are several dialogue-free stretches of the film during which it’s carried just by glances and gestures. The political commentary and the darkness of the story are tempered with an abundance of spectacle, culminating in a climactic showdown complete with explosions of fire and ice.

Despite the sheer quality of the visual-effects work even back then, the apes in Rise were still a little challenging to buy as fully-fledged characters. Granted, it was also early in their evolution. In Dawn, and even more so here, the apes are so much more than visual-effects flourishes. The superlative work of Weta Digital, supervised by Joe Letteri, complemented by the performances of Serkis, Greer, Notary and the other performers, make the creatures utterly believable. It gets to the point where they stop registering as digital creations, and the audience can fully buy into their journeys and arcs, as individuals and as a shrewdness. Each ape projects a sense of humanity, and having followed Caesar this far, it does sting to see him weary and haggard, wondering if his continuous struggles have been worth it. We get a tiny bit of comic relief in the form of Zahn’s kooky Bad Ape, but this doesn’t undercut the overall seriousness of the film.

While the presence of Miller’s Nova does seem derivative of any number of ‘a kid and their X’ stories, the bond that she develops with Maurice is convincingly fleshed out, and the film refrains from using Nova as an emotionally-manipulative plot device. The apes’ willingness to accept a human child into the fold also indicates that a war with humans isn’t their first course of action.

As the human antagonist, Harrelson is utterly terrifying – it’s probably the scariest he’s been since Natural Born Killers. Harrelson has become known for playing eccentric, rough-around-the-edges but ultimately likeable characters. In War, his performance echoes the characters of Vietnam War movies like Full Metal Jacket and Apocalypse Now. This is a film that doesn’t so much turn on battles as it does on confrontations. The central confrontation between McCullough and Caesar is a riveting nail-biter of a scene, impeccably staged and acted. McCullough is a larger-than-life character, but there’s no goofiness to him. Adding to the air of uneasiness around the character is the cult-like nature of his faction, and how he depicts himself as something of a prophet.

Many action movie soundtracks tend to sound indistinct, but Michael Giacchino’s score for this film packs plenty of personality. Giacchino employs a variety of textures, including an emphasis on pitched percussion instruments like the marimba, eliciting a wide range of emotions. Some directors mandate that the score be ‘invisible’, and we’re glad that Giacchino’s work for this film is as visible and as audible as it is.

War for the Planet of the Apes does demand effort from the viewer, as it takes a while to build up to the dazzling finale. Thankfully, the characters – ape and human alike – are easy to get invested in. Reeves proves himself to be a director at the top of his game, wringing drama and genuine emotion from a premise which can, and has, been handled clumsily before. While the door is left open for a sequel, War ends on such a satisfying note that it doesn’t feel like the producers are begging for another instalment. War is a stirring battle cry that caps off a consistently impressive trilogy.

Summary: A sombre yet stirring and stunningly-realised adventure, War for the Planet of the Apes engages the viewer on a human level and showcases everything a masterfully-made blockbuster can be.