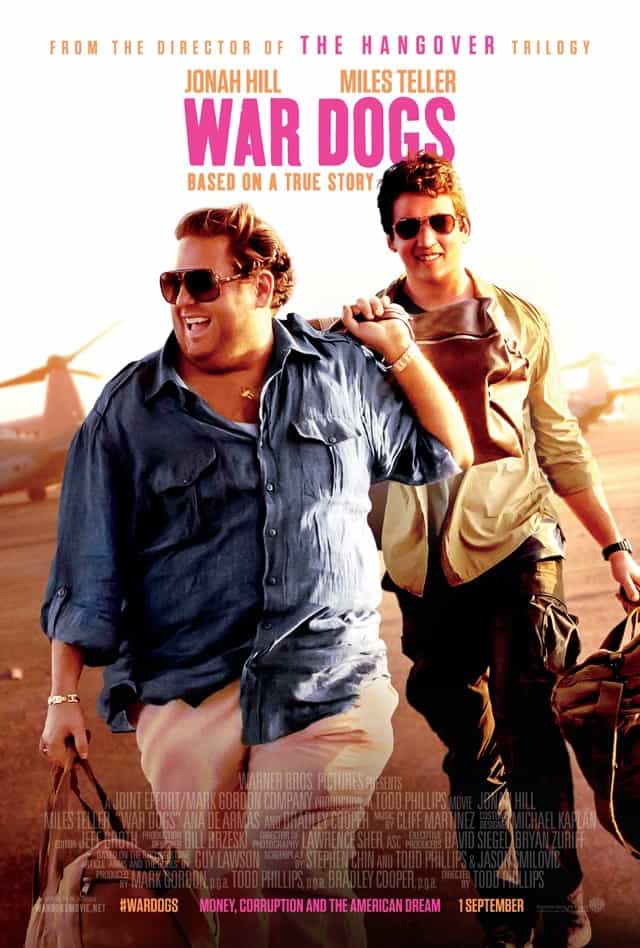 War, what is it good for? If you play your cards right, raking in the dough. It’s 2005, and the U.S. occupation of Iraq and the war in Afghanistan is in full swing. David Packouz (Teller) is a directionless twenty-something living in Miami, reluctantly working as a massage therapist. When his childhood friend Efraim Diveroli (Hill) shows back up in town for a mutual friend’s funeral, the two do some catching up. It turns out that Efraim has founded AEY Inc., an arms dealership, and has managed to secure several contracts supplying weapons and other equipment to the U.S. government. David goes behind the back of his pregnant girlfriend Iz (de Armas), who is against the war, and goes into business with Efraim. The pair soon find themselves in way over their heads, travelling to Jordan, Iraq and Albania as they chase lucrative deals. Is it just a matter of time before the dog that is success turns around to bite them?

War Dogs is based on Guy Lawson’s Rolling Stone article Arms and the Dudes, which he expanded into a book. Screenwriter Stephen Chin called on his own experience, having travelled to Iraq while trying to buy the rights to the story of two American businessmen who were setting up a radio station there. With War Dogs, director Todd Phillips of the Hangover-trilogy fame faces the challenge of making the audience root for inherently unlikeable characters. Both Efraim and David idolise Tony Montana, with a huge poster of the Scarface protagonist decorating their office. They’re simultaneously scrappy underdogs and shady wheeler-dealers. Multiple artistic liberties are taken in the name of making things more exciting, and Alex Podrizki, the third partner, doesn’t feature in the film at all. That said, it does feel like the audience is getting a peek behind the curtain of a world most of us know nothing about. The technicalities of how Efraim and David go about their business are explained clearly enough without being too dry.

The narrative conceit is that David is the strait-laced one while Efraim is the brash go-getter, and as such, David is our way in and is the narrator of the story. It might actually be that way in real life, but it definitely seems like character traits have been greatly exaggerated to keep things interesting. Jesse Eisenberg and Shia LaBeouf were initially considered for the lead roles, presumably Eisenberg for David and LaBeouf for Efraim. Instead, we have Teller and Hill. The two generate watchable buddy chemistry, and there’s an undercurrent of tension because we know it’s somehow all going to implode in the end.

Few can play dazed and confused like Teller, who for most of the film, is unwittingly being strung along. Of the two main characters, David is ostensibly closer to the traditional ideal of a movie hero, and the real David Packouz has a cameo as a singer at a nursing home. The real Efraim Diveroli wanted nothing to do with the movie. It makes sense that Teller is given the lower-key role, with Hill having the time of his life playing a character who is as boorish as he is savvy. Hill doesn’t have to be endearing or charming, and he steals the show with much gusto on multiple occasions. As expected, de Armas is relegated to playing the stock nagging girlfriend who actually has a point, but is mainly in the movie to look pretty, since the two male leads don’t.

The world of ‘grey market’ arms dealing offers plenty of dramatic storytelling possibilities, with room for sanctimonious finger-wagging as well – the compelling Lord of War comes to mind. Phillips tries to play down the seriousness of the subject matter, instead playing up the goofy absurdity of the premise. Just as Efraim and David find themselves in over their heads, it seems Phillips does as well, since the consequences here are graver than any of the mishaps that befell the Hangover Wolfpack. Speaking of those guys, Bradley Cooper makes a brief but memorable appearance as a notorious gun runner. Also, celebrity poker player and infamous playboy Dan Bilzerian cameos as himself. It seems the kind of people who idolise Bilzerian are exactly the target audience for this film.

War Dogs mostly steers away from insightful satire, instead taking the ‘have your cake and eat it too’ tack of glamourising its subjects while also mocking them. It’s inevitable that impressionable younger viewers will aspire to be just like Efraim and David: who cares if it’s moral or even legal if there’s a payday to be made? It seems the takeaway is ‘if these stoner dude-bros could wriggle their way into multi-million dollar contracts, why can’t I?’

It is entertaining and intermittently fascinating, but it’s hard to shake the sense that Phillips’ lowbrow slacker dude comedic sensibilities might not be the best fit for the true story. Yes, there’s comedy to be mined, but diving headfirst into the can of worms and actually making a statement about the implications of war profiteering might’ve been a more worthwhile enterprise.

Summary: War Dogs plays to the strengths of both its stars, but in playing squarely to the dude-bro demographic, it passes up the chance to be searing and impactful.