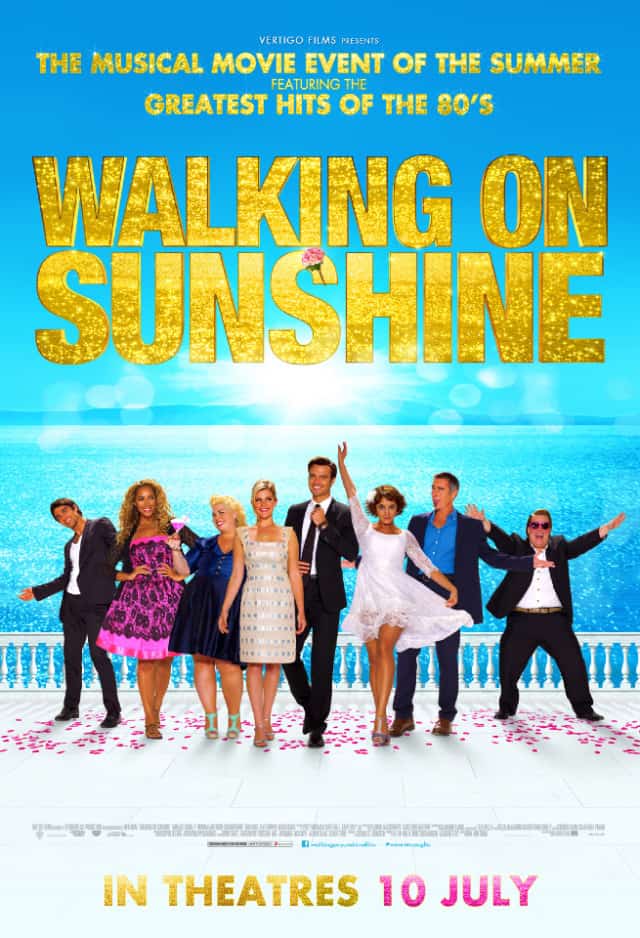 Very few films aspire to the heights (or, more accurately, depths) of chirpy cheesiness achieved by Mamma Mia!: a cinematic guilty pleasure if ever there was one. Walking On Sunshine is that rare film which does. In fact, it’s dancing merrily into theatres, so intent on recreating the unexpected blockbuster success of Mamma Mia! that it’s forgotten to tweak the formula even a little bit. And so, we go from the sun-washed beaches of Greece to the sun-washed beaches of Italy, from cheesy but super-catchy ABBA tunes to cheesy but super-catchy 80s pop hits, from an awkward love affair to… an awkward love affair. Do you see where we’re going here? The unfortunate thing is that Walking On Sunshine never quite hits on that elusive magic which allowed Mamma Mia! to be so bad and so darn good at the same time.

Here’s how the story (what little there is of it) goes: Taylor (Arterton) meets and falls in love with gorgeous Italian hunk Raf (Berruti) on a sun-kissed beach in Italy. But the summer is drawing to an end, and she has to be responsible and go back to school. Three years later, when she finally graduates, Taylor returns to the same Italian village to meet her headstrong, impulsive sister Maddie (Scholey) – whereupon she learns that Maddie, on the rebound from her horrible ex Doug (Wise), is due to get married in a matter of days. The twist in the tale, of course, is that Maddie is planning to marry Raf – the love of Taylor’s life.

In other words, the plot, such as it is, is flimsy and contrived. The narrative staggers predictably from song to song, whether it’s Taylor and Raf realising they still have feelings for each other (It Must Have Been Love), or Doug and Maddie crooning about their toxic relationship (Don’t You Want Me). The characters seem to function on the basis of narrative expediency: Doug, for instance, waltzes in and out of the film, teetering dangerously between unforgivable jerk and viable love interest. Truth be told, if you’re looking for depth or complexity, look away now. The film seems to operate on the blithe assumption that yet another karaoke-friendly song will sweep away the awkward writing that preceded it.

The film also falters somewhat where its cast is concerned. All of them are earnest to a fault, belting their numbers with more passion than skill. They certainly work incredibly hard at playing characters with little more complexity than a batch of paper dolls: Arterton is the textbook lovelorn but responsible girl, torn between her head and her heart, while Scholey sizzles efficiently as the bubbly Maddie. But they never really manage to give off the sheer, unmitigated joy that practically radiated from the A-list cast populating the Greek islands in Mamma Mia!. Of the supporting cast, comedienne Katy Brand wins most charismatic honours as the sisters’ best friend Lil – not something that can be said of X-Factor winner Leona Lewis, who should really stick to her day job.

To be fair, Walking On Sunshine does have its merits. If you’re in the right mood for it, it’s a silly, summery burst of fun – not quite as funny and sweet as you might want, but good enough in a pinch. Its soundtrack is great, jumping from Madonna (Holiday) to George Michael (Faith), before taking a delightful detour into tomato-strewn mayhem in the huge musical number that accompanies the title song. There are even a couple of unexpectedly rich character moments that come courtesy of the two sisters: Taylor’s bravery in returning for Maddie’s wedding is a surprisingly emotional moment and one of the high points of the film.

Of course, when it comes down to it, no amount of critical analysis will matter anyway. Walking On Sunshine is, quite simply, the kind of film that’s largely critic-proof. It may not even be as good as Mamma Mia!, and its story and characters are almost wilfully poorly-constructed. But it won’t matter because the film is also relentlessly fun, silly, sunny, and cheesy. Berruti is gorgeous to look at, as are the sun-kissed beaches of Italy. The songs are catchy, summery and joyous. That certainly doesn’t add up to ‘great’ but, if you’re open to it, it just might add up to ‘good enough’.

SUMMARY: Nowhere near as great as its soundtrack, but this is harmless, cheesy fun if you’re in the mood for it.