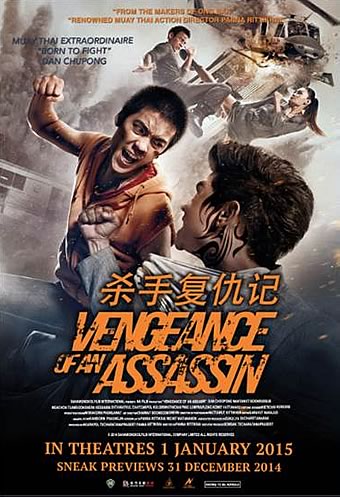 Vengeance is a dish best served cold – and apparently, with a heaping serving of Muay Thai madness on the side. In this action flick, Nathee (Chupong) is driven by the most original of motivations: the search for the truth behind the death of his mother and father. Nathee and his younger brother Thann (Boonrupsup) work at an auto shop run by their uncle Norm (Ping Lampraplearng). Norm is intent on shielding his nephews from the tragic circumstances that led to their parents’ death, knowing danger will not be far behind should Nathee and Thann plan on enacting vengeance. Nathee goes about training himself in weapons skills and martial arts and takes on the assignment to be a bodyguard to Ploy (Tuamsoongnern), the young niece of an influential politician. He gets caught up in an assassination plot masterminded by criminal Chai (Kovit Wattankul) and Thann and Uncle Norm quickly become embroiled in this life-or-death situation, Nathee calling upon his various deadly skills to avenge the death of his parents. 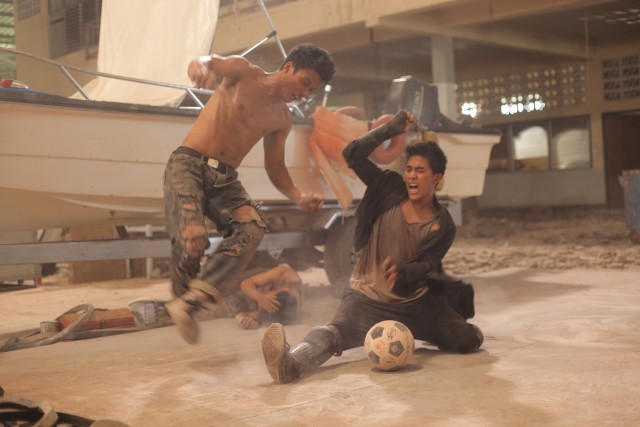 Vengeance of an Assassin is the final film from director Panna Rittikrai, who died shortly before the movie’s release. Rittikrai is a well-respected filmmaker and action choreographer who mentored Thai cinema’s biggest action star export, Tony Jaa. B-movie aficionados and dyed-in-the-wool fans of gloriously schlocky action flicks from the 70s and 80s won’t find anything of that sort coming out of Hollywood today – even direct-to-DVD movies are often dull and grim. It turns out that they need look no further than Thai action movies to get their fix – Vengeance of an Assassin is a cheese-fest that had this reviewer howling with laughter from start to finish. The movie begins smack dab in the middle of a combative soccer match that involves explosives and hot coals. This oddity of an action sequence has no bearing on the plot whatsoever and it seems it’s only included because director Rittikrai just thought it was that good of an idea. Later on, a character is impaled through the chest with a steel pipe, but survives because the pipe “missed his dangerous parts”.

Let’s be honest, foreign action flicks are sometimes more exciting than Hollywood ones because there don’t seem to be as many union-mandated safety restrictions and because the stunt performers seem to actively embrace risking life and limb in the name of frivolous entertainment. Rittikrai’s regular posse of stuntmen well and truly live up to the name “Daredevil Stunt Team” and the production notes boast that they sustain “real injuries” in the name of delivering authentic fights and falls. Lead actor Diew-Choopong Changprung a.k.a. Dan Chupong started out as a member of this team and hit the big time after starring in Rittikrai’s 2004 Muay Thai movie Born To Fight. He’s skilled, intense and athletic and the biggest plus is that being his own stuntman, there’s no need to cut around the fight scenes to disguise a double. The boyishly charming Wat-Nantuwat Boonrupsup complements Chupong well and director Rittikrai waited until Boonrupsup turned 20 to give him a major supporting role. 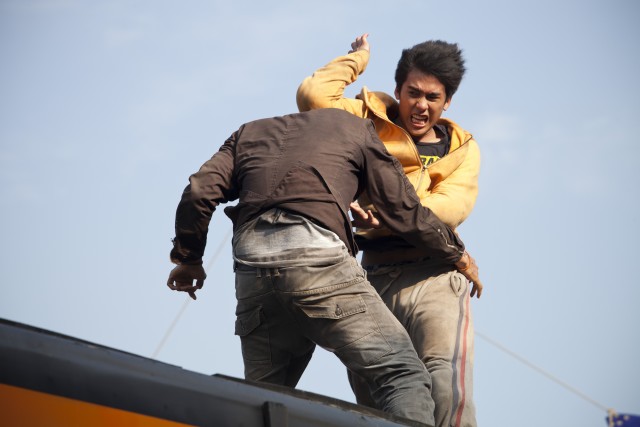 Unfortunately, because of how good the fighting, fireballs, bullet hits and other physical gags look onscreen, the hastily knocked-together CGI footage is all the more disappointing. Perhaps the poor visual effects work is part of the goofy charm associated with movies of this genre, but that doesn’t make it any less jarring when during a skirmish on the roof of a moving train, the actors are surrounded in fuzzy outlines because they weren’t properly composited into the background. A flatly unconvincing digital helicopter soon joins the chase. There’s also the matter of severe mood whiplash – there’s tomfoolery from the comic relief and straight-up executions literally within seconds of each other. Then there are the over-the-top histrionics, with people bawling as others die in their arms, set to maudlin piano music.

Vengeance of an Assassin is impossible to take seriously but if you grew up on the low-budget 80s action movies of Cannon Films and similar studios, it is possible to enjoy. The characters in this film include a merciless, hilariously vampy femme fatale (Nui-Kessarin Akethawatkul) and an octogenarian RPG-firing Chinese doctor (Ooi Teik Huat). With the most threadbare of plots and as silly as its title is unwieldy, Vengeance of an Assassin is nonetheless a rather captivating brand of silly.

Summary: Director Panna Rittikrai’s swansong is dumb, ridiculous and unintentionally funny but packs in plenty of appeal for die-hard genre fans who long for some of the crazy, violent, bloody, balls-out action mainstream Hollywood releases seem to mostly lack.