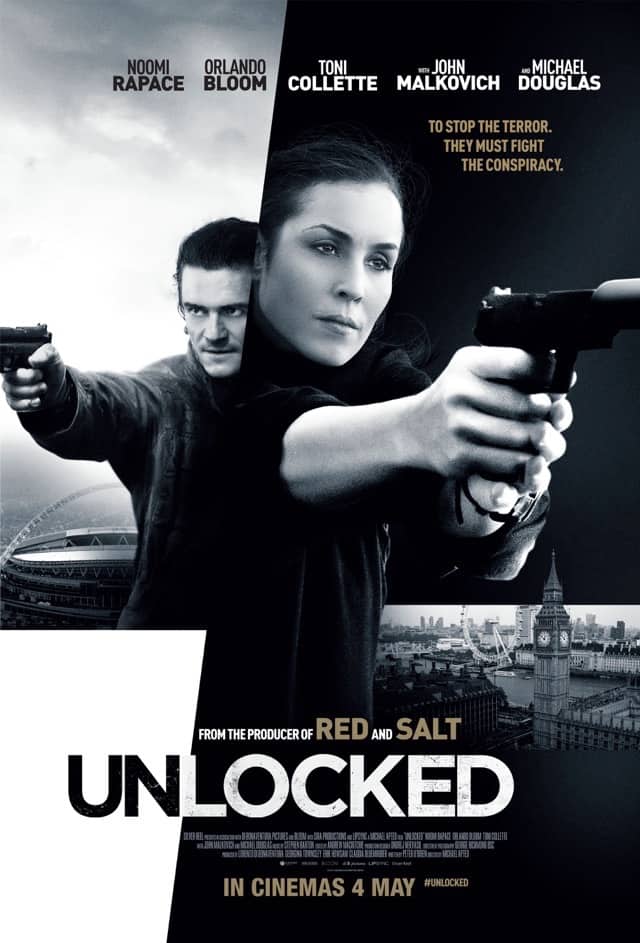 Erstwhile Lisbeth Salander Noomi Rapace steps out from behind the computer and into full action heroine mode in this thriller. Rapace plays Alice Racine, one of the CIA’s top interrogators. After failing to extract information from, or ‘unlock’, a suspect in time, dozens lost their lives in a terror attack in Paris four years earlier. Since then, Alice has been laying low. She is called back into action by senior MI5 operative Emily Knowles (Collette) and the CIA’s head of European operations Bob Hunter (Malkovich). After a CIA agent is killed in London, Alice is tasked with foiling an act of bioterrorism that will cripple London. Alice finds that her mentor and former handler Eric Lasch (Douglas) is also in danger. A spanner is thrown into the works in the form of Jack Alcott (Bloom), an enigmatic soldier-turned-thief, with whom Alice must cooperate to untangle the conspiracy and prevent the devastating attack.

Unlocked is directed by veteran English filmmaker Michael Apted, who replaced the initially-hired Mikael Håfström. Apted is best known for the ground-breaking Up series of documentary films, as well as the 1999 Bond movie The World is Not Enough. Unlocked is a markedly less flashy, less ludicrous espionage thriller than Pierce Brosnan’s penultimate 007 outing was. That’s not to say it’s very good. Anyone who’s watched a few episodes of 24 will have an idea of what to expect from this competently executed but profoundly generic and somewhat dull action movie.

As if to compensate for doing nothing new, screenwriter Peter O’Brien throws multiple twists at the viewer, but these generate plot holes instead of excitement. Unlocked also falls back on what has now become a cliché – religious extremism as a red herring. We’re supposed to assume that Islamic radicals are the villains, when there are obviously shadowy forces at work merely making it appear that way. A scene in which an Imam explains why he would never incite violence is written and performed well enough, though.

Rather like last year’s Criminal, Unlocked is a run-of-the-mill action thriller which has wrangled a top-shelf cast. Rapace makes for a fine action heroine, even if her back-story (rough childhood, problems with authority, haunted by a past failing) is typical stuff.

There isn’t nearly as much of Bloom in this as the poster implies. While his turn as a roguish rough-and-tumble type sporting scraggly hair, tattoos and an earring has its entertaining moments, it’s clear that Bloom is better suited to playing clean-cut characters.

Stunt coordinator and second unit director Greg Powell, who has worked on the Bourne and Harry Potter series and several James Bond films, puts together fight scenes that look fine, but aren’t particularly impactful. Unlocked looks slick and its cast is packed with talent, but it’s clear that nobody’s heart was really in this. Unlocked isn’t a travesty, it’s just the kind of action movie that comes and goes without anyone really noticing.

Summary: A top-flight cast is mostly wasted in an action thriller made with competence but without passion.