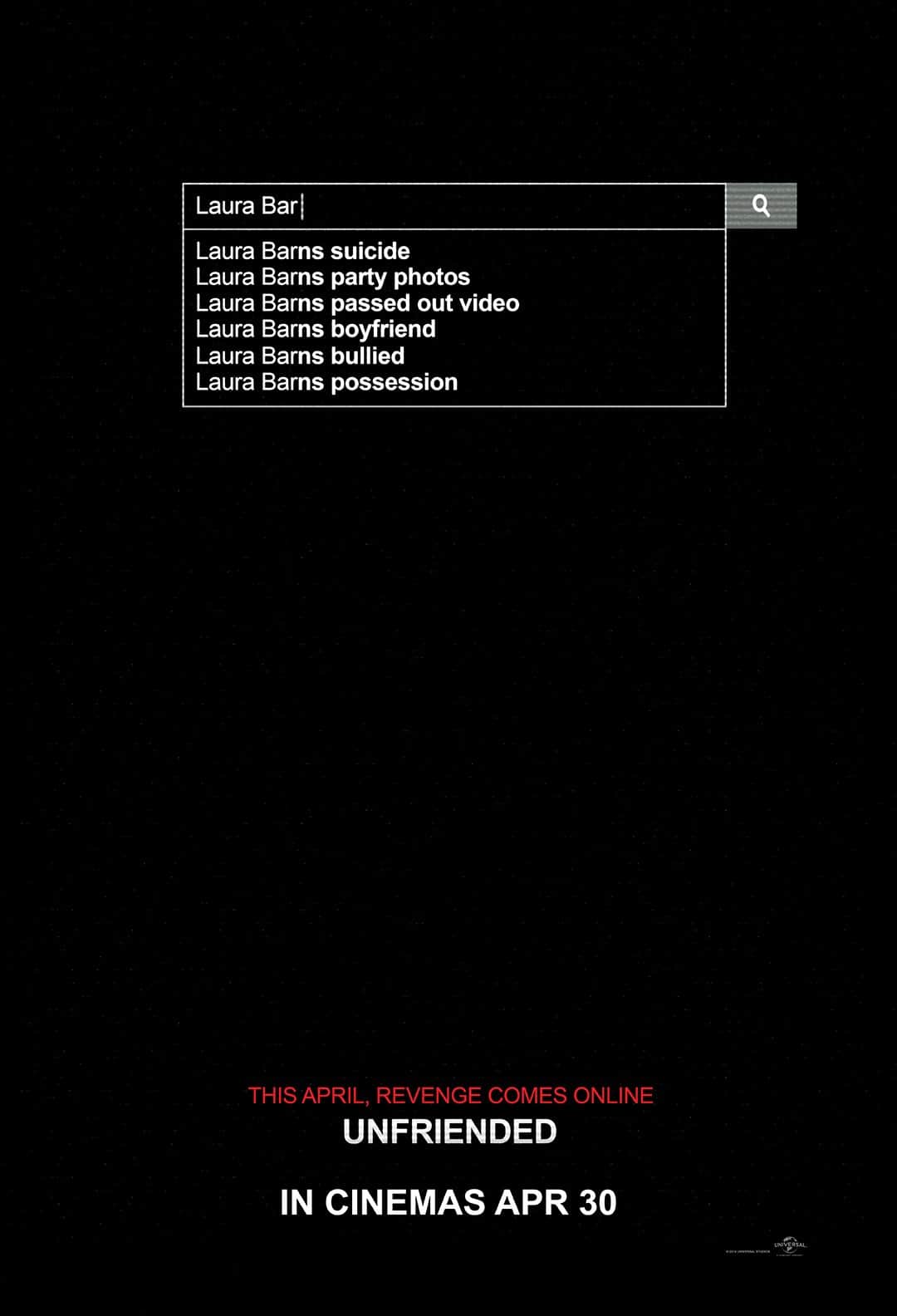 A leaked personal photo or a dropped Skype call is far from the most terrifying thing that can happen to you online in the horror flick Unfriended. It is a year after high school student Laura Barns (Sossaman) commits suicide after an embarrassing video of her passing out a party is posted on YouTube. Six of her classmates, Blaire (Hennig), Mitch (Storm), Jess (Olstead), Val (Halverson), Ken (Wysocki) and Adam (Peltz) are having a routine Skype call when a mysterious seventh caller enters the conversation. The six friends initially believe that this is some kind of cyber prank, but as eerie happenings unfold both within and beyond the online realm, it appears that Laura may be back from the dead and out for revenge, meaning that they’re up against a high-tech haunting.

There are many major motion pictures that just don’t feel right when watched on a laptop or smart phone screen. A small screen does undercut the grandeur of something like Interstellar or Skyfall. Here’s a film that is likely at its most effective when viewed on a laptop or smart phone screen. The gimmick here is that the entire movie unfolds on the monitor of protagonist Blaire’s MacBook. The story progresses through interactions on various websites and social media platforms, the likes of Skype, Facebook, iMessage, YouTube, Spotify and even Chatroulette figuring into the plot. One element that makes horror movies particularly scary is the “this could happen to you” factor, Unfriended playing on the ubiquity of a life lived online. “Connection Lost”, a recent episode of Modern Family that plays out entirely on Claire Dunphy’s laptop, uses the format to elicit laughs instead of shrieks. 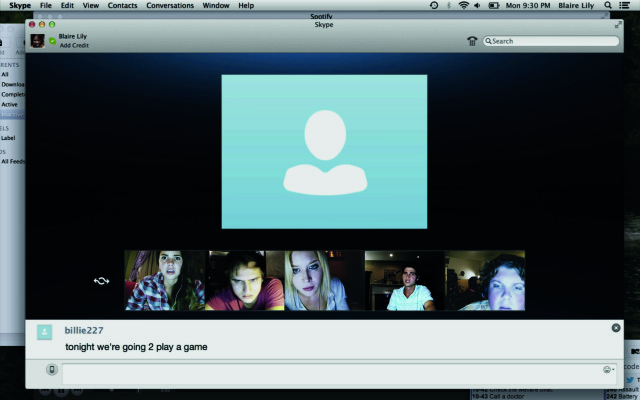 Unfriended is directed by Georgian-Russian filmmaker Levan Gabriadze and comes from Jason Blum’s Blumhouse Productions. While Blum is an Oscar nominee for producing Whiplash, his primary stock in trade is low-budget, franchise-ready horror flicks – after all, he has made a killing from the Paranormal Activity series, with The Purge and Insidious poised to spawn several more films. As a Blair Witch Project-type movie for the new media generation, Unfriended has a novelty to it. However, this gets old really fast, and just as how found footage horror movies are now regarded as a nuisance, a whole string of “computer scream” movies could easily become unbearable. Naturally, sequels are already being planned. Still, the effort put into creating a convincing online milieu is praiseworthy. Plotting out the desktop ecosystem and online interaction history of a fictional character isn’t as easy as it sounds and the attention to detail and continuity here is on point.

While Unfriended’s presentation sets itself apart from the teen-aimed horror movie pack, it still succumbs to one of the most common shortcomings of this subgenre: unlikeable characters. Strip away the bells and whistles of its format and you’re left with a pretty typical “teenagers get picked off one by one” horror flick plot structure. To begin with, our characters are complicit in cyber-bullying that brings about a girl’s suicide, so they aren’t exactly the nicest kids in town. Still, they are adequately relatable and low-budget horror movies can get away with a cast of relative unknowns – only Renee Olstead is a somewhat recognisable name. There’s the teen high school drama and the skeletons in the clooset each friend is hiding from the next but none of this is particularly original or compelling. There are individual moments brimming with tension and a cool ticking clock device, but when you step back and look at Unfriended from a macro viewpoint, there isn’t a lot of overarching suspense. The main “mystery” is perhaps if Blaire and her friends are being targeted by a hacker troll or a literal ghost in the machine, but that question is answered pretty quickly. 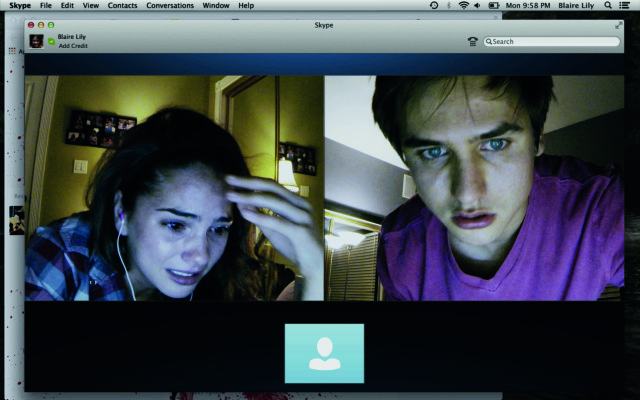 With its cyberbullying theme, Unfriended is topical if more than a touch exploitative of a sensitive subject. The title also walks the line between “moderately clever” and “goofy”, and works marginally better than the rather 90s original title, “Cybernatural”. The specificities of the film’s style means that it will soon become dated and in as little as ten-odd years, will become an amusing time capsule of how we live our lives online circa 2014-15. It is inventive and refreshing, but given a couple of sequels, we have a feeling those heaping praise onto Unfriended now might feel a twinge of regret then. 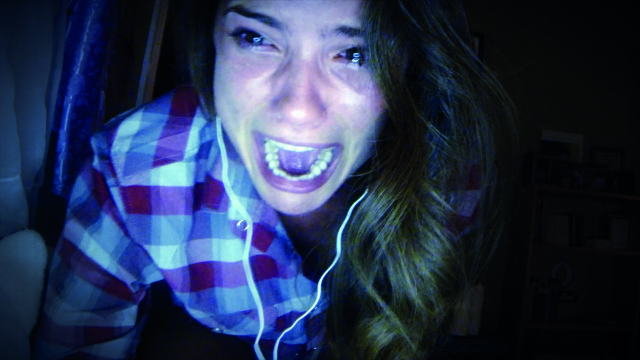 Summary: “Those Meddling Millenials: The Horror Movie” achieves an admirable level of verisimilitude with its portrayal of online interactions, but whatever originality there is in its presentation cannot offset the teen horror clichés that serve as the movie’s backbone.