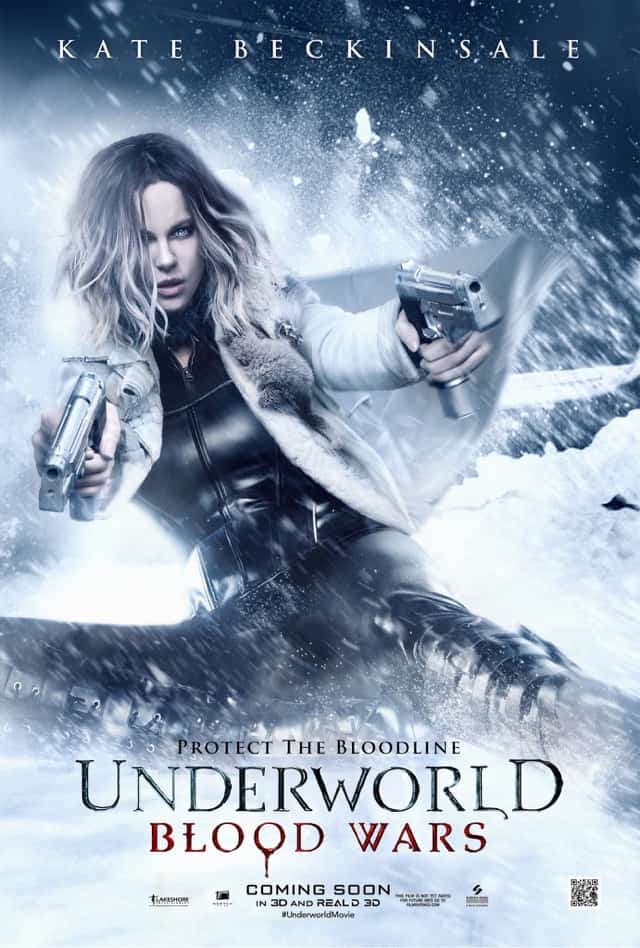 To paraphrase Dracula, the granddaddy of all vampires, “Watch them, the children of the night. What terrible movies they make!” The fifth instalment of the Underworld franchise sees Selene (Beckinsale) hunted by the Lycans and the Vampire coven that betrayed her. She can only trust her protégé David (James) and his father Thomas (Dance), a vampire elder. The duplicitous, power-hungry Semira (Pulver) plots Selene’s destruction, while the Lycan leader Marius (Menzies) plans a Lycan siege of the Vampires’ stronghold. Both sides of the conflict are in pursuit of Eve, Selene’s daughter with the Vampire/Lycan hybrid Michael. Selene and David pay a visit to the reclusive Nordic Coven, appealing to Vidar (Andersson) and his daughter Lena (Nicholson) to ally themselves with them as the centuries-long war rages on.

Back in 2003, there was at least a modicum of novelty in the premise of Underworld, which blended slick Matrix-style action with supernatural horror. Also novel was the casting of Kate Beckinsale, then known predominantly for English costume dramas, as an action heroine. It’s safe to say that 13 years and four further movies later, said novelty has eroded. Underworld: Blood Wars is impressive in that it somehow manages to make vampires fighting werewolves (with machineguns flung into the mix) boring. This was originally conceived as a reboot and ended up being a sequel – we can’t say for certain if either option is better than the other.

Director Anna Foerster has several TV credits to her name and makes her feature film debut here. Instead of injecting some new blood into a franchise that sorely needs it, Foerster dutifully emulates the style established by the first two films’ director, Len Wiseman. While location shooting in Prague does lend the proceedings some mystique and grandeur, everything is smothered in that bluish-grey filter the series has become infamous for.

The screenplay is written by Cory Goodman, whose credits include the mediocre genre flicks Priest and The Last Witch Hunter. The plot is muddled and conveyed via awkward chunks of expository dialogue. Even though we begin with a “previously on..”-type recap, what should be a straightforward story is still a challenge to keep track of. The political intrigue and back-stabbing within the vampire nobility is a pale imitation of the devious scheming we’ve seen on Game of Thrones and shows of its ilk. The action sequences are uninspired, barring a fun take on a cage match. The unintentionally funny computer-generated Lycans do make one hanker for the animatronic effects on display in the earlier films. A sojourn to the ice caves populated by the Nordic Coven should have made for a refreshing change of scenery, but it looks like a chintzy theme park.

Beckinsale cuts as elegant a figure as ever in that PVC catsuit, but she’s going through the motions. Selene’s long life has been marked by multiple tragedies, but she never feels like an actual person the way iconic action heroines like Ellen Ripley from the Alien series and Sarah Connor from the Terminator franchise do. She’s just there to look badass, which isn’t going to cut it.

James reprises his sidekick role from Underworld: Awakening, remaining sullen and uncharismatic. It is always fun to see respectable English actors pop up to cash a paycheck, with Dance also returning, albeit briefly. Pulver hams it up as the vampy femme fatale, something she’s perfected on Sherlock as Irene Adler. Semira struts about in an assortment of costumes, including a particularly daring criss-crossing barely-there number, Pulver relishing the silliness of it all. It’s too bad that Menzies, sporting a scraggly wig, is altogether too bland as her Lycan counterpart. Also suffering aesthetically are The Nordic Coven vampires, who look like rejects from an episode of Xena: The Warrior Princess.

After sitting through 92 minutes of a film that felt far longer than that, it’s easy to arrive at the conclusion that this franchise’s blood has long since curdled. Providing neither pulse-pounding action spectacle nor a compelling, propulsive mythos, Underworld: Blood Wars leaves not a mark, but a stain.

SUMMARY: Between the confusing, over-plotted narrative, the stilted performances and the dull visuals, we can’t find much of a reason for the fifth Underworld movie to exist.