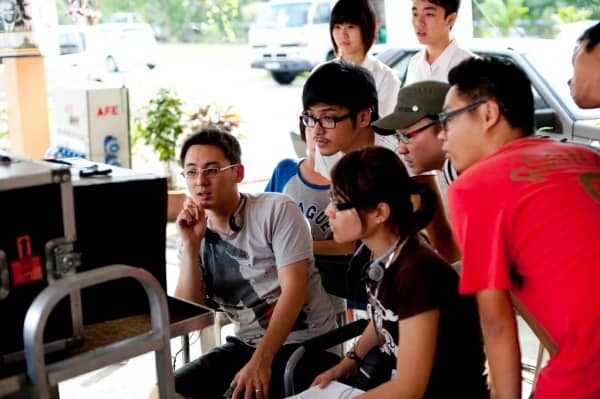 There is warmth here in his tone that is uncharacteristic of many local directors I have come across. Some are shyer, more reserved; some look austere, even intimidating. I have seen photos of Yee Wei before, but he is more welcoming and smiley-er in person. I was almost surprised by Yee Wei`s friendliness and normalcy.

But normal is a relative term, as I would soon come to learn, when Yee Wei starts telling me about life before he got into the industry. A business major while at school, Yee Wei became an entrepreneur before working behind the camera. â€œI owned a restaurant. We closed it last year. So it`s full time for me in the film industry now. In Singapore, at least, stories like that are few and far between. His arc is a neat inverse of that of many local filmmakers, who after toiling for years after working behind the camera, leave the industry to seek out greener pastures.

He shows no regret over his decision, nor does he feel a need to defend it. The 33-year-old is quite the picture of zen coolness, perfectly at ease with his career of choice. â€œEven before my restaurant I was doing other businesses. I was finding what makes me happy, doing all these different things. It`s a continual search of what my purpose is and what I want to do.

His decision to go full throttle into the world of business was influenced by his family, he says, and that because he thought that was his destiny, but he soon realized that it was not giving him the satisfaction he desired. Having taken film classes at his college, the University of Michigan, Ann Arbor, as well as completing a few student films there, his passion for the art form grew, and he soon decided film was what he wanted to do.

â€œEver since I was in primary school, I have always been involved in activities that involved entertainment. I took part in a storytelling competition when I was young. I was in the AVA club, the drama club and choir. But I just saw that as something to nurture my soul. I did business and accounts to nurture my wallet. It was only with film that I decided that I could balance both.

It is no secret that money is a sensitive topic among many filmmakers. While Yee Wei does not reveal how much he makes, he readily shares with me that he is still doing a lot of wedding videos for practical reasons. It pays the bills, keeps his pockets from going empty, and allows him to pursue feature filmmaking.

Yee Wei, who first cut his teeth in the industry making short films, is also forthcoming about the challenges of being a local director. â€œI think if you are looking at filmmakers who are making a living off directing full time, there is only one in Singapore: Uncle Jack (Jack Neo). Even someone like Eric Khoo, who has four films screened at Cannes, is still searching for ways to make it work. He has other tracks by which he makes money. Only Jack Neo has managed to make it viable, but he is only able to have success in Singapore and Malaysia. No one has managed to crack the international market yet.

This has not stopped him plying his trade and doing what he is passionate about. Twisted, his sophomore feature effort, will be released in cinemas later this month. He tells us more about it.

You have done comedy in your short films, and Blood Ties was a really dark horror film. What are you focusing more in Twisted ?

I try to balance action, horror and comedy. There are different segments in the film, and one segment was dedicated for the spooks and scares. There`s another segment where I could purely experiment with the action and people running around and there`s another segment which is a blend of all the genres. We got action directors to help choreograph action sequences. But I wanted to make sure that the action sequences were fun. I was really gearing towards the fun.

When I started to do this project, I was trying to leverage off what I grew up with. What I thought was really amazing, was how so many of us short filmmakers are trying to make good short films, and yet a man named Rod Serling was churning out, week after week, for many years, churning out good short stories in The Twilight Zone. Some of the stories are supernatural; some are not. They are just weird stories. That sort of inspired me to do Twisted. I wanted to do stories which are just weird, doesn`t make sense, that are almost fantastical… but still fun!

For comedy, I like Stephen Chow, of course! (laughs) Many of us here grew up with his comedies. I was very fascinated by Hong Kong comedies, and I ask myself what is it with them that they can be enjoyed internationally while still being very rooted in their local context. So for me it is not about local films not being able to travel, but making it in a form that is relatable to foreign audiences.

Do you have aspirations for Twisted to do well internationally? Did you make it in mind hoping it could break into a foreign market?

Yes of course. We are all looking for that formula. Jack Neo`s films, I think, have limited potential overseas. It is partly because of the use of local language. Still that in itself is not too big a barrier, as long as the themes are able to transcend borders. He has had a few films which managed to have moderate success overseas because they had themes which are universal like Homerun and I Not Stupid.

That`s what I`m trying to do with my first two feature films as well, trying to deal with such themes. Blood Ties actually got quite a lot of international attention and I was very surprised. For Twisted I was playing with funny concepts and funny delivery while still rooted in a local context. So I hope local audiences won`t find it unfamiliar, while foreign audiences will enjoy it as well.

Speaking of international, Twisted seems rather ambitious since there are international stars in your cast. What was it like working with them?

It was very easy working with them. I was very happy working with them, especially the experienced ones. I approached the filmmaking process as a very collaborative process, so everyone has to contribute. During rehearsals or during on set, if anyone feels something is not right, I welcome their ideas. I try to make it such that everyone could feel free to make suggestions.

There is a segment with Zhu Mimi`s character and a bunch of the other guys. Most of the stars are pretty experienced, but Zhu Mimi is on a whole different level. So when they all came together, there was a certain amount of challenge that each of them faced.  When someone gave a suggestion, someone else would feel challenged to give another suggestion, so in the end we came up with a lot of nice surprises, which I loved.

Was it intimidating managing so many famous cast members? Besides Zhu Mimi there are stars like Mark Lee, and Linda Liao is rather well known too.

(whispers) Actually I didn`t know who Linda was you know. Everyone was like â€œHuh! Got Linda ah! (laughs) Apparently people know her through MTV.

I was a little concerned at first because you hear of people throwing tantrums on set, but I didn`t get that at all. I am very grateful. Everyone was very willing to contribute. And I mean, if they joined the project, they must have seen something in the script that they liked, and that was enough to set my mind at east.