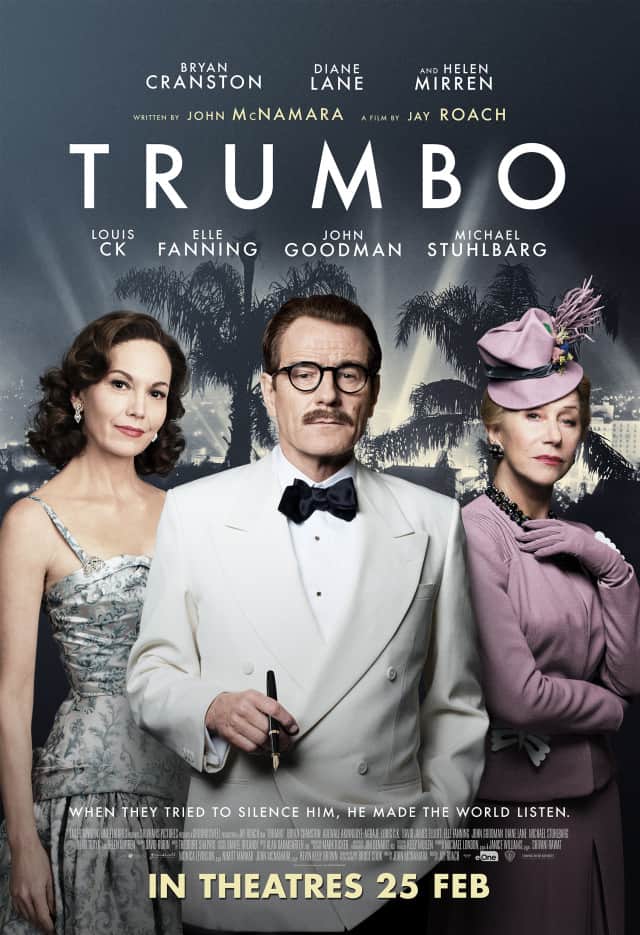 How agonising would it be to write something spectacular and widely-lauded, yet be forcibly denied credit? This reviewer wouldn’t know, because he’s never written anything nearly that good, but Dalton Trumbo (Cranston) certainly knew that feeling.

It is the late 1940s in Hollywood, and Trumbo is highly in demand as a screenwriter. He is a member of the American Communist Party and is one of the “Hollywood ten”, a group of screenwriters subpoenaed to testify before Congress. Trumbo is ostracised as his relationship with his wife Cleo (Lane) and three children is put under immense strain. Trumbo becomes a target of gossip columnist Hedda Hopper (Mirren) and is disavowed by his friend, actor Edward G. Robinson (Stuhlbarg), so Robinson can protect his own career. Trumbo is unable to find work after being blacklisted, so he lets his friend Ian McLellan Hunter (Tudyk) take credit for Roman Holiday, which eventually wins an Academy Award. Gradually, rumours begin to swirl surrounding Trumbo’s clandestine ghost-writing. As the likes of Kirk Douglas (O’Gorman) and Otto Preminger (Berkel) hire Trumbo to craft screenplays for them, Trumbo inches closer to finally getting the credit he is due. 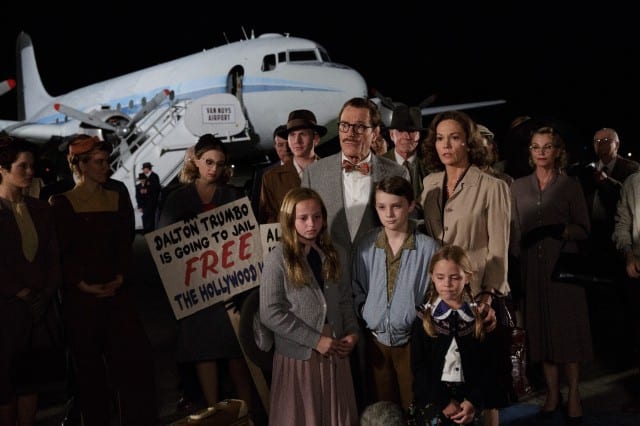 It’s no secret that Hollywood loves movies about itself and, as a biopic about a prominent Hollywood figure, set against the backdrop of Cold War political turmoil, Trumbo does come off as Oscar bait. It’s a noble story of a stridently principled and talented man who risks everything to stand by his ideals. It is the hope of the filmmakers that audiences at large will find something in this story to identify with, because Trumbo often plays a little too “inside baseball” to be readily accessible. It’s not a difficult story to understand, and Dalton Trumbo does deserve to have his story told, but if one isn’t that big a cinephile, specifically of the era in Hollywood during which Trumbo and his peers were active, Trumbo can be difficult to get into. This might sound disparaging and rest assured we don’t mean it that way, but Trumbo does feel like a film made for HBO. Director Jay Roach and star Cranston will next collaborate on one such HBO film: Lyndon B. Johnson biopic All The Way.

John McNamara adapted the biography, Dalton Trumbo, by Bruce Alexander Cook into this film. It seems that any writer tackling a script about a titan in the same field would be painting a target of considerable size on his own back. Adding to the risk is the fact that such revered classics as Roman Holiday, The Brave One and Spartacus are not only referred to, but are key components of the story. There is a righteous indignation that McNamara brings out in his script, but Trumbo says in a speech that there were “no heroes and villains” while the witch-hunt for “commies” was ongoing, yet several characters do feel exaggerated in the name of artistic license. Roach is known for helming comedies such as the Austin Powers and Meet The Parents trilogies as well as Borat and The Campaign. Perhaps the closest he’s come to directing a drama is HBO film Game Change, about Sarah Palin’s vice-presidential bid. While there are no obvious missteps in his direction, perhaps the material could have benefited from a defter touch. 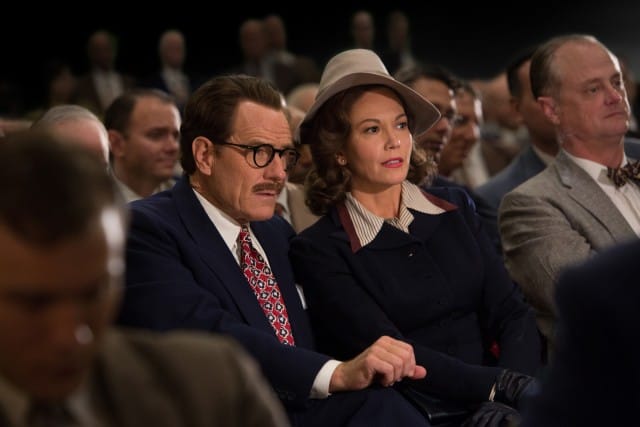 The ace up Trumbo’s sleeve is Trumbo himself, brilliantly portrayed by Cranston. For audiences who only knew him as bumbling dad Hal from Malcolm In The Middle, Cranston made the world collectively drop its jaws with his staggering, indelible Walter White in Breaking Bad. Cranston’s Trumbo is not a boring hero; he can be frustratingly stubborn and ornery, but that twinkle in his eye and the spark of true giftedness draws us to him.

Leading the supporting cast, Lane is wonderfully convincing as a woman of the 1950s. She handles the role, particularly the scenes in which Cleo confronts her husband about being swallowed up by his ghost-writing and becoming hostile towards his family, with strength and grace. Elle Fanning portrays Trumbo’s eldest daughter, Nikola, and her relationship with her father is contentious but understandably so. Louis C.K. and Alan Tudyk, both more often associated with comedic roles, both deliver solid dramatic turns. O’Gorman and Berkel’s impressions of Kirk Douglas and Otto Preminger respectively are entertaining and just broad enough. Goodman is charismatically boorish and Mirren chomps down on the role of the catty, flamboyant gossip columnist with great relish. 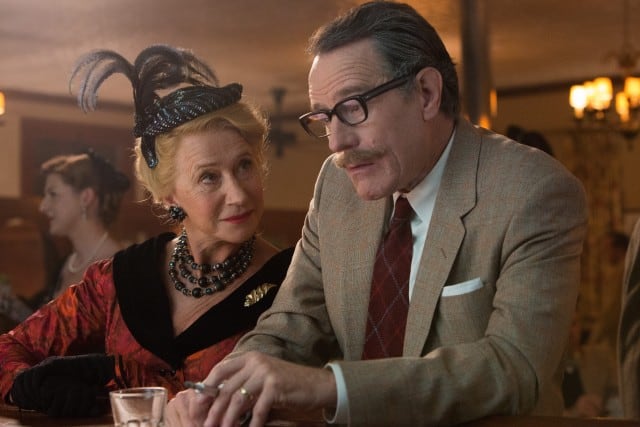 Trumbo is a biographical drama set in Hollywood with a talented actor in the lead role just waiting for the kudos to roll on in. In that regard, it’s a safe, albeit not especially satisfying, awards season offering. For those already enamoured with the period, the ’50s style and décor might be eye-catching, but Roach doesn’t do quite enough to hook the audience in and transport them right into the thick of ’50s Hollywood. There’s earnestness aplenty, but a disappointing lack of pizzazz.

Summary: Star Bryan Cranston is firing on all cylinders, but because it is only moderately successful at breathing life into the history it depicts, Trumbo holds the audience at arm’s length.