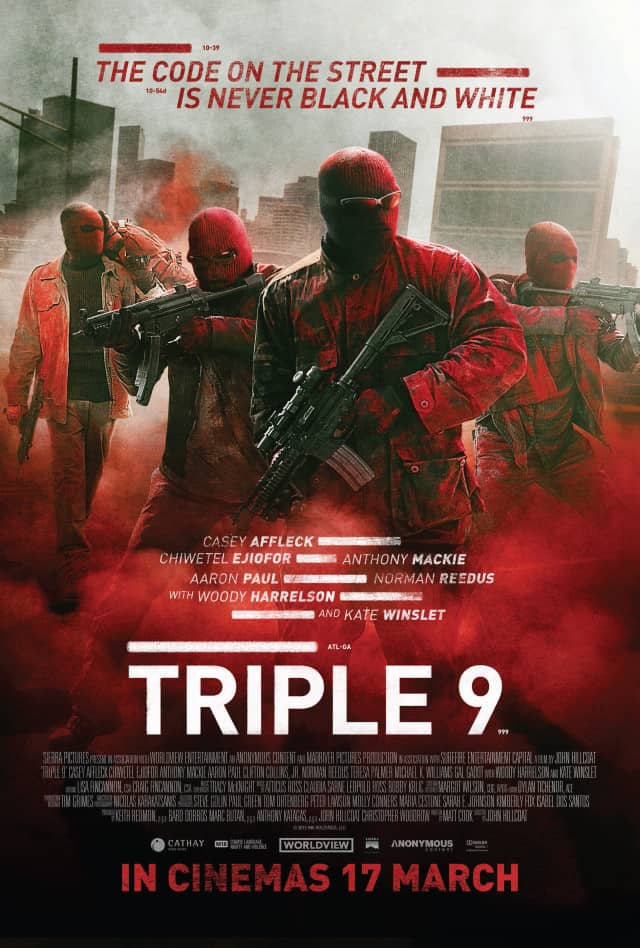 Out on the streets, it’s never black and white – though, sometimes, it is red, owing to the dye packs that permanently stain stolen cash. Oh, the red is also often blood. Criminals Michael Atwood (Ejiofor), Russell Welch (Reedus) and his brother Gabe (Paul), alongside corrupt cops Marcus Belmont (Mackie) and Franco Rodriguez (Collins), have been committing armed bank robberies. The crew is working for Irina Vlaslov (Winslet), the wife of a powerful Russian mafioso. Michael has a son with Irina’s sister, Elena (Gadot), further complicating matters. To pull off another job, Marcus and Franco suggest calling in a code ‘999’ i.e., killing a cop to distract the rest of the police force so that the crew can break into a government office and steal data concerning Irina’s husband. Their target is Chris Allen (Affleck), Marcus’ new partner who has transferred from a different district. Chris’ uncle happens to be Sgt. Det. Jeffrey Allen (Harrelson), who is tracking down the bank robbers. The stage is set for all-out war on the streets of Atlanta, Georgia. 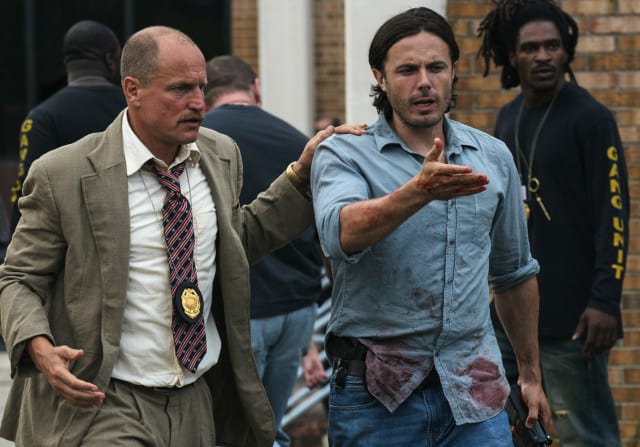 First off, we would like to get that “Oh, this stars James Lye, Wong Li-Lin, Lim Yu Beng and Mark Richmond” joke out of the way. If you were watching Singaporean television in the ’90s, you know what we’re talking about. Anyway, Triple 9’s screenplay, written by Matt Cook, landed on the 2010 Black List of most-liked scripts making the rounds in Hollywood and has finally been produced. At the helm is John Hillcoat, who directed the revisionist Western The Proposition and the prohibition-era bootlegging drama Lawless. Triple 9 is a scuzzy, grimy crime thriller that liberally borrows from the likes of Training Day and Heat. The action sequences are messy and frenzied; our protagonists are mostly criminals who don’t get along; we deal with the theme of honour (or lack thereof) among thieves and there’s an abundance of street-level violence. 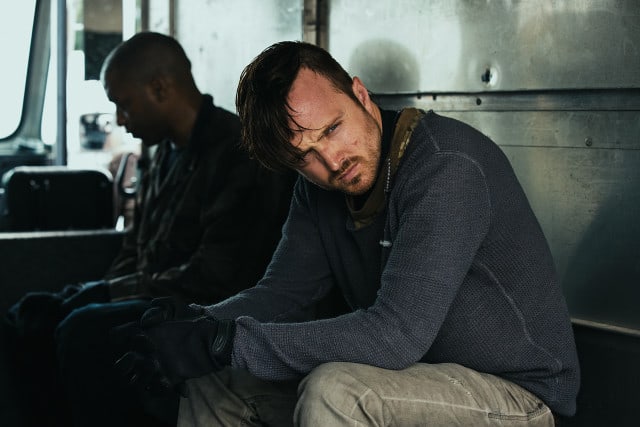 There are many points at which Triple 9’s plot feels like it comes straight out of a direct-to-DVD action flick starring 50 Cent and a pre-Mr. Robot Christian Slater. Hillcoat has managed to assemble an impressive cast and it’s impossible not to have high expectations looking the list, which comprises an Oscar winner, several Oscar nominees and dependable character actors. Sometimes, seeing a name actor covered in tattoos and scars, all sweaty and grimacing while toting a gun, can feel like we’re just watching a pampered star playing dress-up. For the most part, Triple 9 does feel fairly authentic, with the city of Atlanta actually getting to play itself instead of doubling for some other locale. Nothing feels prettied up, nothing’s slick and shiny, and the situations are overblown but not ludicrously so. 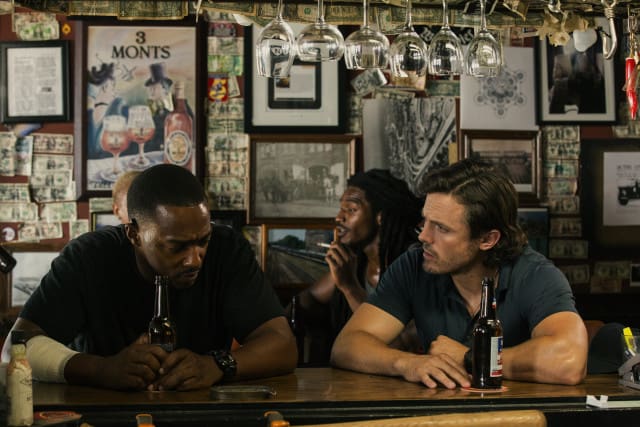 As the straight-arrow rookie with a bit of a chip on his shoulder, Affleck is well-cast, and a scene in which Chris threatens a local cartel bigwig without knowing what he’s getting into does demonstrate that the character is out of his element. Unfortunately, Ejiofor is harder to buy as a tough-talking thug. He has played sinister characters before, but he’s unable to fully shake off the innate nobility that has served him so well in other, very different roles. It comes with the territory of crime movies, but the members of the team are insufficiently distinct and can blur together after a while. Of the group, Collins is actually the most convincing as the unscrupulous, two-faced Rodriguez. Unfortunately, Paul and Reedus don’t bring too much to the table beyond “Hey, Jesse Pinkman and Daryl Dixon are brothers!” 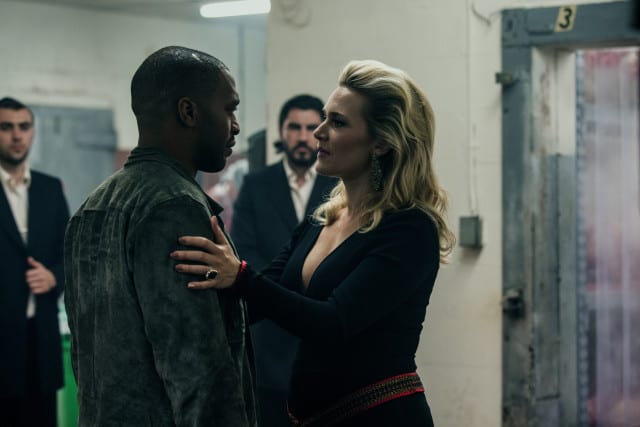 Winslet chomps the drab scenery as the main villain of the piece, a stereotypical mob wife who’s been handed the reins of underworld power while her husband sits it out in a Russian prison. It’s a character even more ridiculously evil than Jeanine Matthews in Divergent and Insurgent. Gadot and Palmer are there to strut about in abbreviated outfits, providing eye candy and doing little else. Harrelson also doesn’t get a chance to work his offbeat, quirky charm in a role that could have been played by pretty much anyone. 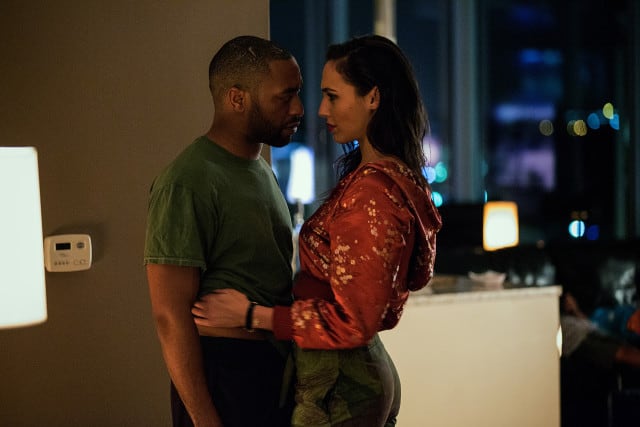 Triple 9 is a disappointingly generic crime flick that is elevated ever so slightly by its formidable cast. Not too much of a spin is put on the crime-thriller formula and the would-be shocking twists and turns in the last act fail to have much impact at all. Hillcoat keeps things moving along and consciously avoids stretches of exposition, but that has the side effect of making the connections between the characters a little confusing to keep track of. At 115 minutes, it’s also a mite too long and could do with some tightening up. But, if you have a taste for this sort of thing, you’ll probably find Triple 9 to be a competent thriller set on the mean, mean streets of Atlanta.

Summary: It fails to live up to the expectations generated by that cast list, but Triple 9 has enough brutal thrills and cops-and-robbers intrigue to scrape by.