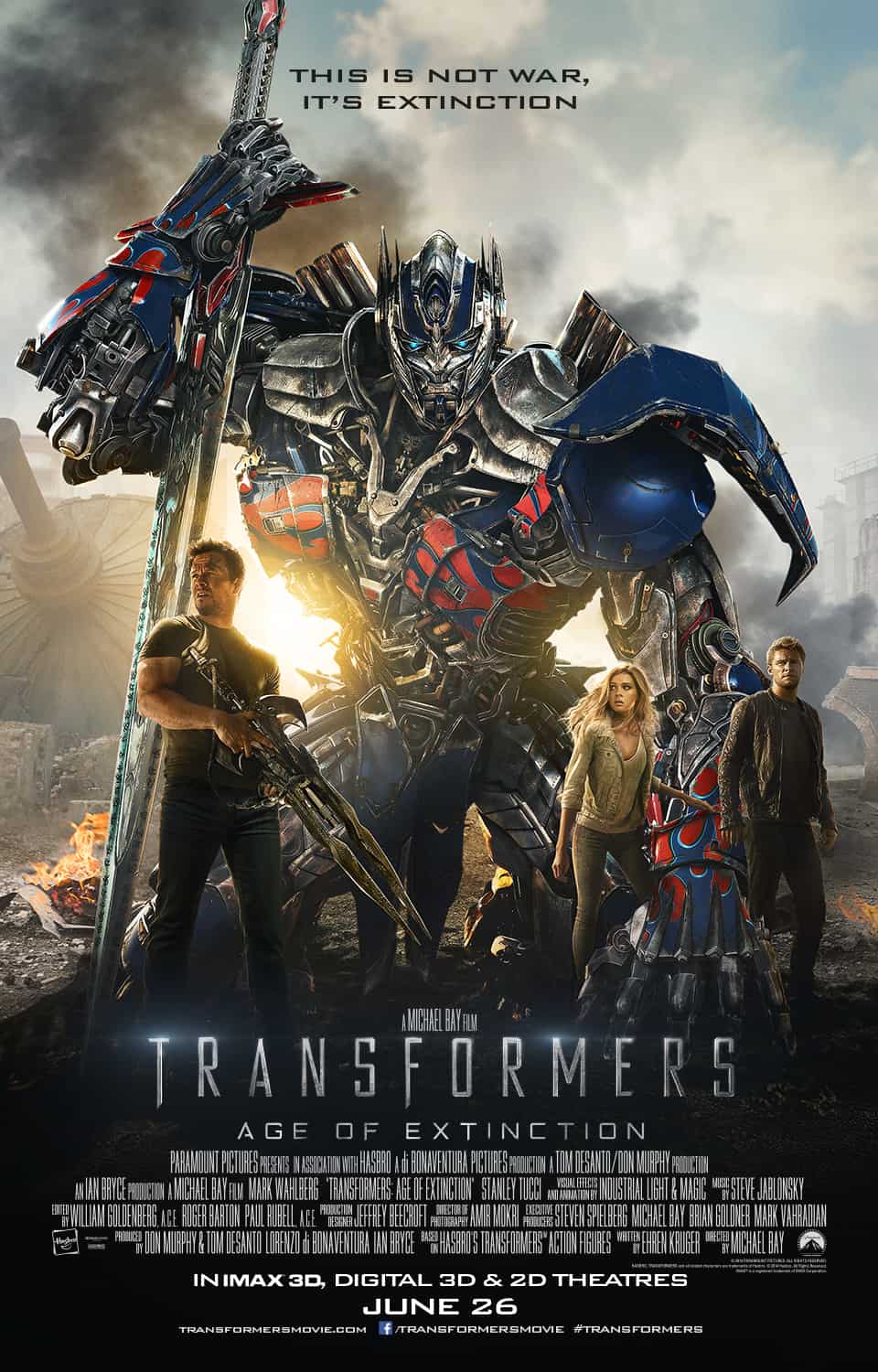 Lord Bay of House Boom has returned locked and loaded for the fourth live-action Transformers film despite saying he would quit the franchise, this time with a new human cast. It has been four years since Chicago was decimated in the battle between Autobots and Decepticons and the U. S. government has decided to end their partnership with the Autobots, declaring them enemies. CIA official Harold Attinger (Grammer) is in charge of hunting them down, engaging the services of mercenary Savoy (Welliver) and ruthless Decepticon bounty hunter Lockdown (Ryan). Joshua Joyce (Tucci), owner of tech giant KSI, has a lucrative government contract to manufacture man-made facsimiles of the Transformers by reverse-engineering captured and dismantled Autobots and Decepticons. Meanwhile, Texan inventor Cade Yeager (Wahlberg), his best friend Lucas (Miller), his daughter Tessa (Peltz) and Tessa’s boyfriend Shane (Reynor) get drawn into the conflict when they unwittingly come into the possession of a beat-up old truck that just happens to be Optimus Prime (Cullen) himself. With the extinction of humanity imminent, Optimus and the remaining Autobots must defeat Attinger and the Decepticons in pursuit. 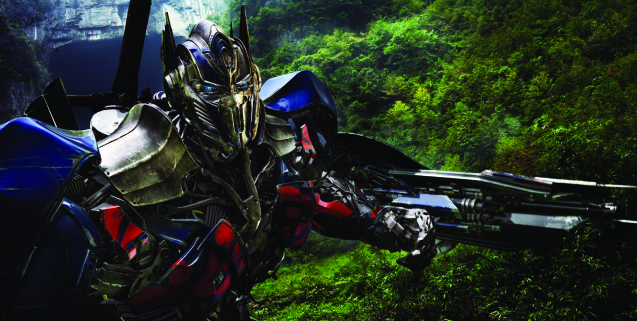 Tennis champ Boris Becker said “you get used to eating caviar and at some point it tastes as ordinary as everything else.” In the context of action movies, explosions are akin to caviar. More doesn’t necessarily mean better, but director Michael Bay has wilfully rejected this notion and continues to stuff his films with more and more. He promised a “less goofy” outing but as this reviewer has learnt the hard way, a Michael Bay cannot change his spots. The elements in the second and third films that led to them being critically panned are still here, just in slightly more controlled doses. There’s still juvenile humour, there’s still racism and sexism, there’s still obnoxious product placement, the action scenes are still overwhelming flurries of whirling, clanging metal, it’s just reined in a bit and therefore slightly more tolerable than before. Bumblebee still talks using voice clips. Instead of an annoying actual dog, there’s an annoying homemade robot dog. Instead of Linkin Park, there’s Imagine Dragons. The film’s stabs at self-aware winking at the audience (an elderly movie theatre proprietor bemoans how all major releases are remakes and sequels) are more awkward and on the nose than anything else.

Apologists of this film series have often used the “this is not Citizen Kane” argument. Well, even Citizen Kane had a running time of 119 minutes. This bad boy clocks in at 165 minutes, the longest Transformers movie yet. It’s overkill. Were this around 100 minutes long, we might’ve been really entertained. Still, there are definitely parts of the movie to commend. Bay and screenwriter Ehren Kruger have decided to make the human villain a CIA official, which combined with the decreased role of the military, makes this less of a jingoism party than the earlier films in the series. Having human scientists attempting to create their own Transformers without comprehending the danger and complexity of the technology is a perfectly viable angle to come at the story from, if somewhat Terminator-esque. And best of all, our protagonist is no longer the useless, unbearably annoying Sam Witwicky. 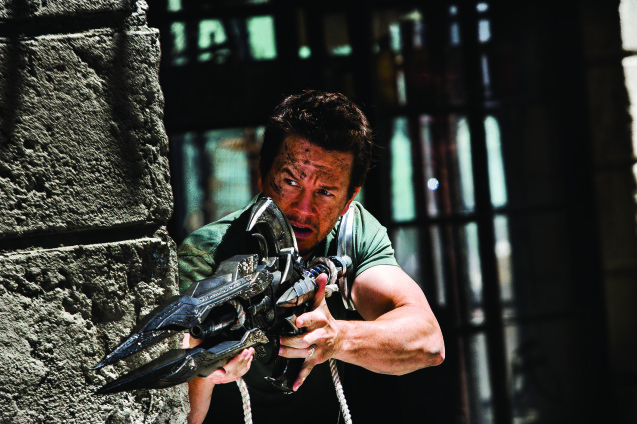 Mark Wahlberg is certainly an upgrade from Shia LaBeouf, even if Marky Mech doesn’t break into an off-key rendition of the Transformers theme song “The Touch” like in Boogie Nights. Cade Yeager is a bundle of clichés: All-American everyman turned hero, amateur inventor whose workshop is filled with knick-knacks plus he’s an over-protective single dad who utterly disapproves of his daughter’s boyfriend just on principle. But Wahlberg being significantly less punch-worthy than LaBeouf makes a difference. Nicola Peltz of The Last Airbender infamy fulfils the pre-requisites of being the female lead in this series: she can’t act and she rocks the Daisy Dukes. Reynor is a typical modern Hollywood imported pretty-boy; some kind of attempt made at explaining away the Irish actor’s accent – Cade ends up disparagingly referring to his would-be son-in-law as “Lucky Charms”. Once again, at least he’s significantly less annoying than Shia LaBeouf. 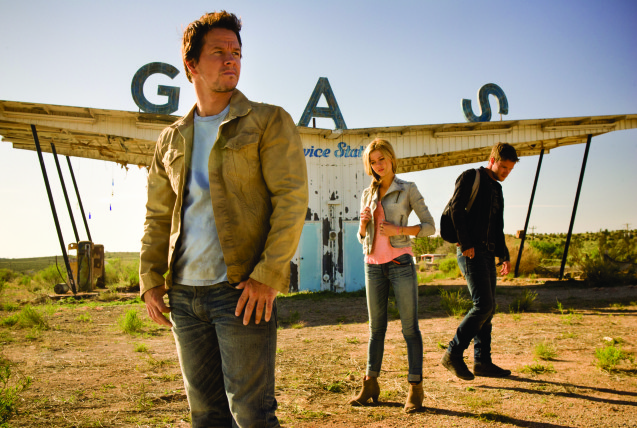 While Stanley Tucci is subjected to a good deal of embarrassment as a send-up of tech icons like Steve Jobs, he is spared the depths of indignity that the likes of John Turturro and John Malkovich suffered in the previous movies. Kelsey Grammer takes his role as primary human antagonist surprisingly seriously and his frighteningly pragmatic Attinger is a bright spot in the film, so many steps up from Patrick Dempsey in Dark of the Moon. Titus Welliver is also quite imposing and the sequence in which he pursues Cade as they cling to the exterior of a Hong Kong apartment building is plenty of fun. As the head of KSI in China, Li Bingbing is the stock boss lady and without Sally Cahill to dub over her like in Resident Evil: Retribution, she valiantly battles the English language. The voice acting is good as well, not only is definitive Optimus Prime performer Peter Cullen back, but the legendary Frank Welker reprises his role as Galvatron from the various animated series. Thankfully, Ken Watanabe and John Goodman’s distinct voices are still recognizable even after being treated with that robot voice filter. Watanabe also gets to deliver the film’s funniest line, Drift’s reaction upon first seeing the Dinobots transform. 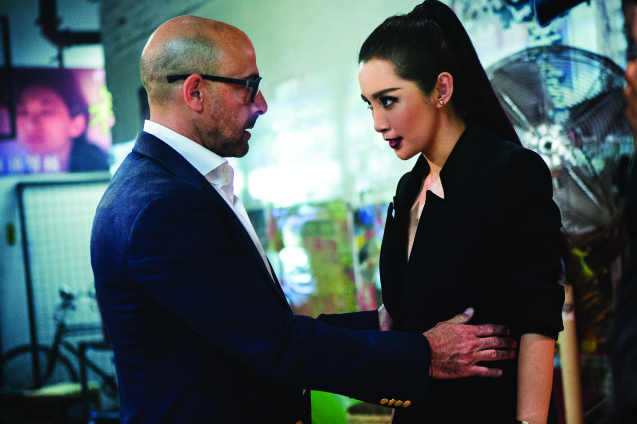 One thing has been true about this series: no matter how bad the rest of the film gets, the visual effects work certainly can’t be faulted and we’d like to salute visual effects supervisor Scott Farrar and the armies of artists and technicians who brought the Autobots, Decepticons and those fan-favourite Dinobots to life. Amidst the bombast, we also get genuinely beautiful shots, like those of the Autobots convening in Monument Valley and a shot in which Lockdown’s ship is reflected in Chicago’s Cloud Gate sculpture. We saw this in IMAX 3D and even though it is often pretty to look at, the constantly shifting aspect ratios can be very distracting. Transformers: Age of Extinction is more bearable than Revenge of the Fallen and Dark of the Moon, albeit certainly not the paradigm shift in quality it is touted to be. But hey, this is a movie with a humanoid robot semi-truck astride a giant robot T-rex charging into battle, so it’s not like anything we say matters too much anyway.

SUMMARY: While relatively better than its predecessors thanks to more likeable leads and less superfluous subplots, many of the problems that plagued the earlier Transformers movies are still very present throughout the 165 minute duration.