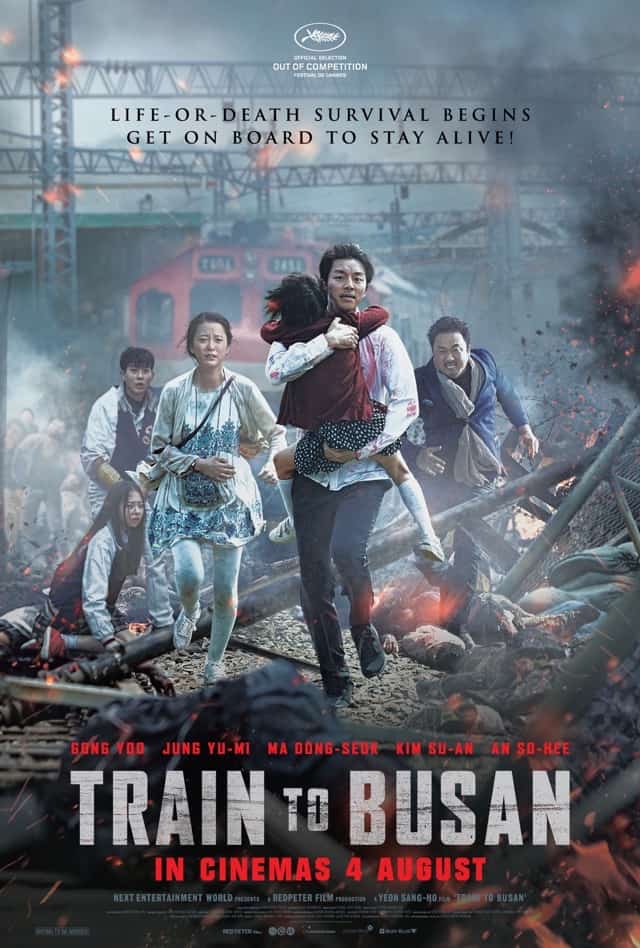 Because walking is too pedestrian, the (un)dead are taking the train in this Korean thriller. Seok-woo (Gong) is an overworked fund manager living in Seoul who is in the midst of divorcing his wife. It’s his young daughter Su-an’s (Kim Su-an) birthday, and she wants to see her mother in Busan. They board the high-speed KTX train for what should be a routine journey. It turns out to be anything but when the train is overrun by zombies; the infection traced back to a biotech plant in Ansan. The other passengers on the train include Sang-hwa (Ma) and his pregnant wife Seong-kyeong (Jung), a school baseball team including Young-guk (Choi) and cheerleader Jin-hee (Sohee), and Yong-seok (Kim Eui-sung), the COO of a bus company. It’s a desperate fight for survival as the infected swarm the train, with the passengers attempting to ensure their survival at any cost.

Genre films have long been used as vehicles to deliver thought-provoking allegories, and Train to Busan depicts not only the clash between the living and the undead, but conflicts across social strata. Writer-director Yeon, known mostly for his dark animated films, makes an assured live-action debut with this taut, intense thriller. Some commentary is made on societal attitudes – Sang-hwa derisively describes Seok-woo as a “bloodsucker” when he learns Seok-woo is a fund manager, and Yong-seok warns Su-an that she will end up like a homeless man if she doesn’t study hard enough. Thankfully, these moments are organically woven into the film’s fabric, instead of coming across as on-the-nose. Yeon has said in interviews that because Korean audiences at large are generally unfamiliar with zombie fiction, it was important for him to establish a relatable, realistic starting point so it would be easier for them to buy the premise. This definitely pays off.

The primary setting of a high-speed train gives the film a focus, with the scope of the unfolding chaos conveyed through news broadcasts and videos posted online. The claustrophobia is put to excellent use in nail-biting sequences wherein our heroes have to sneak past and outsmart the undead hordes in a confined space. Unfortunately, there are several moments of unintentional comedy, with the zombies occasionally coming off as silly instead of unsettling. There’s a fair amount of blood, to be sure, but little gore – zombies with their entrails hanging out might not be strictly necessarily, but body horror of that type might have helped the creatures make more of an impact. As with any piece of zombie fiction, the action can get repetitive in spots, with multiple sequences involving the uninfected bracing against doors to stop the zombies from breaking through.

Disaster films often resort to simplistic caricatures so the audience can be introduced to a bunch of characters as quickly as possible before calamity strikes. Here, there’s just enough characterisation such that we know a sufficient amount about the key passengers without it feeling like a drag. The career-minded father who has neglected his daughter is a well-worn trope, but both Gong Yoo and child actress Kim Su-an are able to sell the relationship. Kim Su-an might actually be the most nuanced of all the performers, since there is a bit of a tendency among the cast to over-act. Yeon is unafraid to give the de-facto hero plenty of foibles – his selfish actions might earn the audience’s dislike, but it’s highly possible that most of us would behave just as Seok-woo does if we were in his shoes.

Putting a child and a pregnant woman in jeopardy is another hoary disaster movie cliché, but in Yeon’s hands, it never gets egregiously manipulative. Ma Dong-seok serves as both the comic relief and, surprisingly enough, the action hero, with his character emerging as the most physical. Jung Yu-mi brings a quiet warmth to Seong-kyeong, with the married couple bickering kept to a reasonable amount. The high school sweethearts, who would typically come off as annoying in films of this type, are very tolerable here. A pair of elderly sisters also provide additional heart. Portraying an elitist, snivelling exec, Kim Eui-sung will have viewers readily jeering.

We’d like to think crisis only brings out our better angels, but there’s no denying that worse demons often bare their fangs in such situations. Yeon toes the line such that Train to Busan doesn’t come off as overly cynical or laughably schmaltzy, with just enough verisimilitude for the zombie mayhem to be built upon. While these are far from the scariest zombies to have lunged across the screen, tension is sustained throughout and Train to Busan ends up being quite the gripping ride.

Summary: Boasting a mix of frenzied thrills and social commentary, Train to Busan is very much alive on arrival.