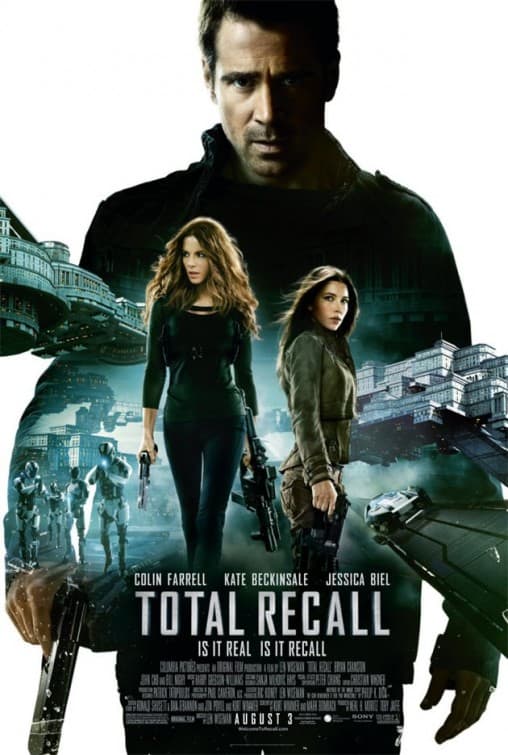 However, easy as it is to bash this film on the fact that it’s a remake alone, it’s also important to judge it on its own merits. This reviewer is at somewhat of an advantage having not seen the original film from start to end and therefore not having an emotional attachment to that iteration. While it might be helpful to compare the two versions, as a standalone film, does Total Recall 2.0 work? Actually, kinda, sorta, yes.

Filling in for Austrian beefcake Schwarzenegger is Irish beef patty Colin Farrell as Doug Quaid, a lowly factory worker who makes a living assembling robot policemen. Quaid is married to the beautiful Lori (Beckinsale), but feels markedly unsatisfied with his boring existence and decides to get a memory implant from the company Rekall, which would allow him to live out his fantasy of being a treacherous secret agent all in his head. However, it turns out that Quaid really was a secret agent who had been given a memory wipe, and his darling wife, an undercover agent monitoring him for the Chancellor Cohaagen (Bryan Cranston), immediately sets about trying to kill him. The mysterious Melina (Biel), a resistance fighter from Quaid’s former life, rescues him as he struggles to make sense of the disorienting revelation of his secret past.

Total Recall is generally an enjoyable science fiction action film which draws the viewer in somewhat with some pretty cool action sequences and good visual effects work, and functions competently on the level of a popcorn flick thrill ride. However, the film offers nothing new, and this seems to hammer home the point that a Total Recall remake was probably redundant. It seems stripped of whatever intellectual subtext Dick had written into his short story and plays like a more action-driven and less clever Minority Report also a P-K-D adaptation (which had Colin Farrell in it too). The slums of the Colony, which Quaid calls home, are a multicultural, cyber-punk hodgepodge with predominantly Asian influences, which is what most every depiction of a futuristic dystopia has been since Blade Runner, the first film adaptation of a Phillip K Dick story. The maglev car chase is cool and all, but seems ripped right out of Minority Report). And the robot police force is pretty much a cross between the Stormtroopers from Star Wars and the robots from I, Robot.

However, one would be wont to mention that the action sequences manage to generate some excitement, shot in Len Wiseman’s glossy, kinetic style. He might want to rename himself “Lensflare Wiseman” because his use of that effect borders on the excessive. There are a few inventive elements to be seen: in the future, people commute between The Colony and the United Federation of Britain via “the fall”, a gravity train that tunnels through the earth. Cue fight scenes in zero-G, and a relatively spectacular finale which sees the super-subway get destroyed. There are also the afore-mentioned maglev cars and elevators that, like the one out of Charlie and the Chocolate Factory, can travel every which way. The close calls where elevator cars zip right past our heroes at frightening speeds can be genuinely intense. On the gadget front, there are the literal “hand phones”, biotech implants which ensure you’ll never leave your phone at home again.

Colin Farrell has shied away from big-budget blockbusters after the massive failure that was 2004’s Alexander, instead rebuilding his reputation in critically-acclaimed smaller films such as Crazy Heart, In Bruges and Ondine. He shows off considerable action hero chops and while he’s no Ahnold (at his peak, anyway), does have the muscle definition and bulk to show for it. He marshals a confused, paranoid guy who has remarkable abilities lurking beneath the surface pretty well, but one gets the impression that Arnie was probably much more exciting in the part, though Farrell is clearly a better actor.

Kate Beckinsale shines as Lori and visibly relishes the chance to go all-out evil, cold-hearted bitch. She does a great transformation from “nice” Lori to “evil” Lori, and it’s clear that director Wiseman loves showing off his wife. With the Underworld movies under her belt, Beckinsale is great to watch in the martial arts and gunfight sequences, combining a degree of elegance and sex appeal with dangerous force. Jessica Biel is quite a bit blander, and seems not much more than the tagalong action girl, though she does have her share of action bits (including a catfight with Beckinsale – mrrrow!) and eh, is alright.

Bryan Cranston as the main villain is woefully underused. The guy is an excellent actor, but has too little screen time to make much of an impact and most of it squeezed in at the end as a lead up to the finale. Beckinsale ends up shouldering the bad guy responsibilities, when Lori is meant to be a henchwoman of Chancellor Cohaagen’s. Bill Nighy, an alumnus of Wiseman’s Underworld flicks, gets even shorter shrift as Matthias, the leader of the resistance – getting a grand total of one scene and barely enough time for his signature scenery chewing.

If you’ve come for your share of futuristic science fiction wham bam fisticuffs, then Total Recall Redux delivers those goods. However, if you’re a fan of the first film, be forewarned that Mars, mutants, exploding eyeballs and creepy tumour-creatures are nowhere to be seen. This seems more sanitized, safer and more generic, but also less self-indulgent and more accessible (Paul Verhoeven, director of the original, isn’t known for his subtlety).

SUMMARY: Strap yourself in, but it’s not so much happy trails as mildly-but-barely satisfying trails. The earlier film is probably the way to go for a crazier, wilder trip.