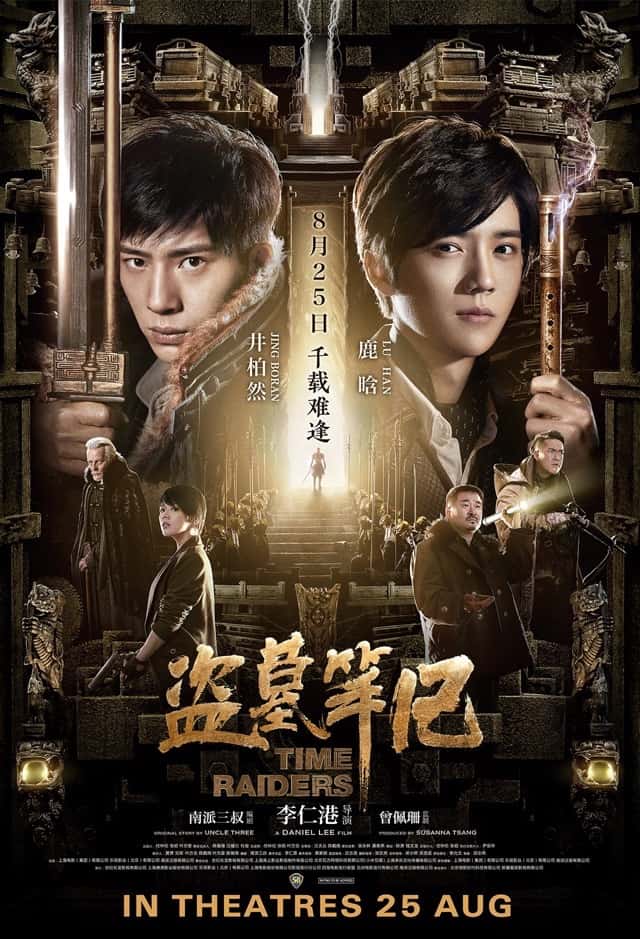 Chinese filmgoers seem to have developed a fascination with tales of intrepid archaeologists, with another fantasy adventure flick arriving to cater to them. Wu Xie (Lu Han) is the proprietor of an antique store and was born into a long line of grave robbers. He’s eager to carry on the family business, despite his third uncle Wu Sanxing (Wang) insisting that it’s too dangerous. Wu Xie embarks on an expedition in search of the fabled tomb of the Snake Empress (Sherawat), a sorceress who has been lying dormant for millennia. The enigmatic and apparently immortal Zhang Qiling (Jing) joins the team, and Wu Xie finds himself drawn to this steely stranger. A gang of mercenaries led by A-Ning (Ma) is also out to find the Snake Empress’ tomb. This rival group has been sent by the mad scientist Hendrix (Corbellini), obsessed with the secret to immortality. Untold other-worldly dangers, chief of which being the Snake Empress herself, lie in wait for our heroes.

Time Raiders is based on the immensely popular novel series Daomu Biji (Grave Robbers Chronicles), written by Xu Lei and first published online. Time Raiders was a box office success in China, despite the fact that a TV show telling the same story already exists, a testament to the appeal of the source material. This reviewer is always up for a fun adventurer archaeologist tale, but Time Raiders is entirely too difficult to enjoy at all. It’s laden with the unintentional goofiness, unconvincing visual effects and general incoherence with which recent flashy Chinese fantasy blockbusters have become associated. It’s also highly derivative – there’s no doubt that the English title is intended to invoke the Tomb Raider franchise.

The premise of a protagonist who discovers his family’s history and actively wants to be a part of that legacy has potential, but director Daniel Lee fails to convey the sense that Wu Xie is part of anything special at all. The framing device in which Wu Xie relates his story to a novelist seems quite extraneous, as do several flashbacks intended to flesh out his backstory – do we really need to see his father in the hospital corridor waiting for Wu Xie to be born? The action sequences are choreographed by Tony Leung Siu-hung of Ip Man fame and Jack Tu, the winner of a reality TV show search for Jackie Chan’s disciple. Some of the moves are fun, but the film doesn’t earn any suspension of disbelief, so the physics-defying wire-fu comes off as cheesy instead of thrilling.

The computer-generated effects are an egregious eyesore. The climactic sequence takes place in a remarkably phony subterranean chamber outfitted with ancient clockwork contraptions, so cartoon gears end up flying all over the place as the Snake Empress attacks her unwelcome guests with CGI tendrils. On top of that, she summons an army of mutant worms, which are hilarious rather than frightening in the slightest. There are also hordes of giant spiders and cave crickets, which look like they’ve wandered out of a cut scene from a game on the PlayStation 2. It’s enough to make one yearn for the halcyon days when cinematic treasure hunters fell into pits of rubber snakes.

Lu Han, a former member of the Chinese/South Korean boyband EXO, has boyish charm to spare. He is, however, completely out of his element in this adventure flick. The character is meant to be inexperienced, but even given that, Lu Han is so far away from the ideal of a rugged Indiana Jones-style explorer that it’s wont to pull one straight out of the proceedings. But yes, he looks considerably fetching in glasses, and perhaps that’s all that matters to his fanbase.

One could argue that Jing appeals to pretty much the same demographic that Lu Han does, and as such, the contrast that’s supposed to exist between the wide-eyed and bushy-tailed Wu Xie and the strong, silent, world-weary Qiling just doesn’t take hold. There’s an undeniable homoerotic subtext at play, further strengthened by the fact that neither male lead actually has a female love interest. The scenes in which Wu Xie snaps photos of Qiling looking broody bring to mind Peter Parker meekly asking Mary Jane or Gwen Stacy if he can take their pictures “for the school yearbook”. They’re cute enough together, but their chemistry is far from explosive.

Ma Sichun is also generally unconvincing as the stock badass chick, who commands a posse of grizzled hired guns who all look far more capable than she does. Corbellini’s vaguely Nazi villain is entirely mono-dimensional, and is yet another moustache-twirling ‘foreign devil’ baddie in a Chinese film. There’s a scene in which Wu Xie attempts to appeal to the conscience of the mass-murderer obsessed with eternal life, which is pretty funny. Sherawat is little more than a prop here, playing what might as well be any given Tomb Raider boss.

This review makes it sound like Time Raiders is a case of ‘so bad it’s good’, but even viewed through that lens, this movie’s appeal is strictly limited. It’s way too drawn out, the ending is needlessly confusing and the ineptitude displayed by the filmmakers is too frustrating to be really fun. Now if you’ll excuse us, we have angry Lu Han fangirls to hide from.

Summary: If time is a precious resource to you, don’t give any of yours to this woefully incompetent movie.