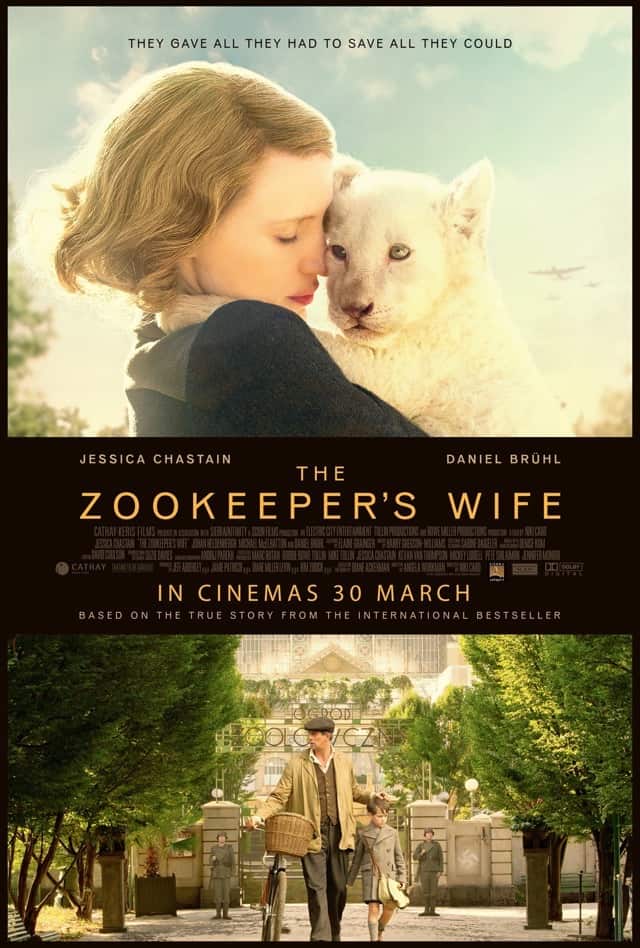 After the second world war, various accounts of everyday heroism started coming to light. The Zookeeper’s Wife tells the true story of Antonina Żabińska (Chastain), who along with her husband Jan (Heldenbergh), ran the Warsaw Zoo in Poland. On September 1st 1939, the German invasion of Poland began, with the zoo devastated by bombings, many of Antonina and Jan’s beloved animals killed. The couple attempt to raise their son Ryszard (Timothy Radford and Val Maloku at different ages) amidst the horrors of war. They also become involved in the Polish underground resistance against the Nazis, using the zoo to house over 300 Jewish “guests” escaping from the Warsaw ghetto. During this time, the Warsaw Zoo is frequently visited by German zoologist Lutz Heck (Brühl), who spearheads a Nazi program to recreate extinct breeds of cows and horses. Heck begins to suspect something is amiss, as Antonina rebuffs his advances, all while ensuring the safety of those who have found a safe harbour in the Warsaw Zoo.

The Zookeeper’s Wife is based on the non-fiction book of the same name by poet and naturalist Diane Ackerman. As crass a thing to say as it is, many audiences have developed a jadedness towards biopics set in Europe during WWII. Most of us have a general idea of the atrocities perpetrated by the Nazi regime, and these films tend to be sombre, stuffy affairs, often too concerned with being respectable to have a visceral impact.

While The Zookeeper’s Wife has much in common with your average WWII prestige pic, there are fascinating, moving elements to the story. For one, there’s the setting of the Warsaw Zoo, and the depiction of the menagerie that Antonina, Jan and their staff cared for. There are elephants, camels, lions, tigers and birds of prey, with the film doing a good job of setting up how dear the animals are to the zookeepers. When everything is ripped away, we get a sense of their pain.

The film was predominantly shot in Prague, with production designer Suzy Davies creating a convincing environment for the story to unfold in. A combination of well-trained animal actors and visual effects work bring the zoo’s denizens to life. A battle sequence in Warsaw’s Old Town area is appropriately intense. There’s also a haunting scene in which the Nazi troops setting the ghetto ablaze with flamethrowers is intercut with the Jews hiding in the zoo observing Passover, singing a seder song.

War films tend to have male protagonists, and it’s easy to see why director Niki Caro and star Jessica Chastain were drawn to Antonina’s story. Caro made waves with her film Whale Rider, and is attached to direct the upcoming live-action remake of Disney’s Mulan. Chastain is as radiant as ever, essaying utmost poise in the most desperate of circumstance. Antonina is not afraid to get her hands dirty, and early on, resuscitates a new-born elephant calf. As with many films of this nature, The Zookeeper’s Wife is a story of sacrifice and principles. We can’t tell if that’s a good Polish accent she’s affecting, but it’s not as distracting as it could’ve been.

The relationship between Antonina and Jan goes through a trial by fire. Heldenbergh is believably rugged, a rough-hewn hero who cares deeply for those around him, even if he doesn’t show it on the surface. Like many German actors, Brühl seems typecast as a Nazi, but he makes for a layered antagonist here. At first, Lutz doesn’t seem quite so bad as his compatriot – after all, he loves animals. However, the depths of his viciousness are gradually revealed.

With the focus placed squarely on Antonina, we don’t quite get to know the people who are huddled in the basement of the zoo’s residential villa, such that The Zookeeper’s Wife sometimes succumbs to the pitfalls of making them faceless victims. The film also hits a considerable lull in the middle, and could have benefited from more suspenseful moments. Caro does strike a balance in portraying the cruelty of the German occupying forces without making the film gratuitously gory.

Throughout The Zookeeper’s Wife, there are glimmers of the bracingly powerful film it could’ve been. Instead, this is largely standard war biopic stuff, but it will bring the story of Antonina and Jan Żabińska to a larger audience than ever before.

Summary: While it’s bolstered by a stirring, engaging lead performance from Jessica Chastain, there’s not too much to distinguish The Zookeeper’s Wife from other wartime biopics of its ilk.