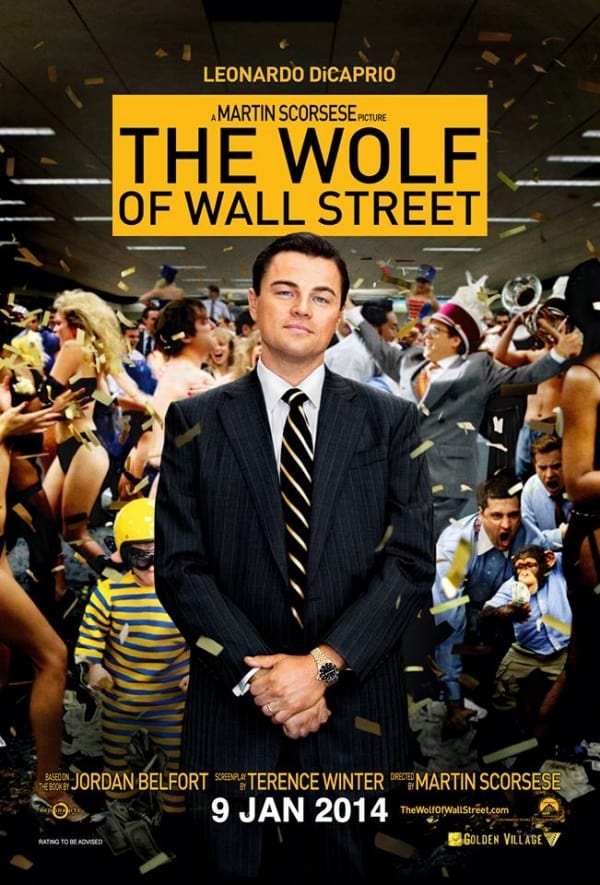 We all know the catchphrase popularised by Michael Douglas’ machiavellein stockbroker character in 1987’s Wall Street, so say it with us: 1, 2, 3: “greed, for lack of a better word, is good”. Part of the controversy surrounding The Wolf of Wall Street is that the film not only makes greed look good, it makes it look like immense amounts of fun. Based on former stockbroker and convicted fraudster Jordan Belfort’s memoir of the same name, The Wolf of Wall Street takes viewers on a rocket ship ride into the stratosphere – but the interesting part is when the engines cut out and the vessel plummets down to the ground.

It is 1987 and Jordan Belfort (DiCaprio) becomes a Wall Street stockbroker, his boss Mark Hanna (McConaughey) teaching him that drugs and prostitutes are the only things that will keep him going. Belfort falls victim to the Black Monday crash, losing his position at the prestigious firm L.F. Rothschild. His wife Teresa (Milioti) finds him a job dealing in penny stocks in a dingy boiler room and being the gifted pitchman he is, Belfort soon earns a fortune. He befriends his neighbour Donnie Azoff (Hill) and they gather a band of misfits to found the Stratton Oakmont firm, which attracts the attention of the likes of Forbes magazine who dubs him “the Wolf of Wall Street”. It also attracts the attention of FBI agent Patrick Denham (Chandler). Belfort continues his extravagant existence, taking on blonde trophy wife Naomi (Robbie) as he dumps Teresa and getting addicted to cocaine and Quaaludes. As he must, the man who has everything realises it’s all slipping through his fingers. He does, right?

The wolf that Jordan Belfort (as depicted in the film) most resembles is the “insanity wolf” internet meme, the one all crazy-eyed, baring its fangs and favouring mutilation and immolation as solutions to all problems. Belfort is a wolf in wolf’s clothing: he’s already a wolf, but he’ll skin another wolf and wear the skin to prove how hard-core he is. Martin Scorsese has created what is essentially Contact High: the Movie, a film that is a wildly unmatchable thrill ride that also has something to say. The person this reviewer saw the film with described it as being the cinematic equivalent of getting drunk – complete with the hangover afterwards.

It is inevitable that a film of this sort will get called out for supposedly glorifying its subject. After all, this won’t be the first zeitgeist-y button-pusher of a movie to get misunderstood: how many guys went “hey dude, Tyler Durden’s so cool, I wanna be just like him”, “Patrick Bateman is the greatest!” or “that Travis Bickle has got it all figured out!”? This reviewer would argue that because The Wolf of Wall Street pulls no punches in its depiction of the sybaritic excesses Jordan Belfort wallows in, it doesn’t feel sanctimonious when the message of “the bigger they are, the harder they fall” eventually kicks in. There are times in the film when Belfort comes off as utterly pathetic, a noteworthy one being a scene in which he is almost paralyzed by a drug overdose and makes an agonising crawl out the door, down the stairs and to his car – it’s an inspired moment of physical tragicomedy which is almost Three Stooges-esque.

Between this and The Great Gatsby, Leonardo DiCaprio sure was partying it up in 2013. While both Jay Gatsby and Jordan Belfort are immensely wealthy, relatively young men who harbour a certain hollowness deep within, there’s no question that Belfort is more openly a maniac and boy, does Leo have the time of his life with this part. Yes, there are the lines and lines of coke, the gratuitous, wanton lovemaking, the white Ferrari “like Don Johnson’s in Miami Vice” and the pet chimpanzee.  But of course there’s the wounded, directionless, broken little boy at the very centre of it all who is drowning in the waves just like his luxury yacht caught in a storm – and you can bet that DiCaprio nails that in his portrayal of the character. Look out for a cameo from the real Belfort as the host of a seminar at the end of the film. Unfortunately for Leo, it seems Chiwetel Ejiofor is still the prime awards favourite at this point.

This being a Scorsese picture, it’s a given that the supporting cast comes out guns a-blazin’. Young Aussie actress Margot Robbie goes all Real Housewife, complete with a Brooklyn accent and a coiffed hairsprayed ‘do and pumps up the sex appeal yet manages to make Naomi more than a mere object in a turn reminiscent of Daryl Hannah’s in the afore-mentioned Wall Street. Who would’ve thought Jonah Hill, more Apatow’s type than Scorsese’s, would end up an Oscar nominee for Moneyball and star alongside Leonardo DiCaprio in this film? His turn as a panting, sycophantic lackey is comedy gold and it is to Hill’s credit that he’s also able to bring the sadness and shame in the part to the surface. Kyle Chandler’s FBI agent character is described as a “boy scout” and the strait-laced authority figure is a glimmer of order in the chaos that swirls around Jordan Belfort. Matthew McConaughey is in this for really just about two scenes, but he makes an impact as the guy who inducts Belfort into the wolves’ den. Jean Dujardin is also a hoot as a suave Swiss banker and money launderer.

The Wolf of Wall Street distinguishes itself from many an awards contender in recent memory by completely shedding any self-seriousness and being in-your-face irreverent. Scorsese pulls off that rare, glorious feat by crafting a film that’s wild and looks fast and loose, yet he knows where all the pieces are on the board every step of the way and juggling all those plates with impeccable precision. Sure, at 180 minutes, this is a long movie – but the time does zip by and then again, it fits the theme of excess (even though a good 20 minutes could have been cut without major consequence). It all adds up to an intriguing effect of subtly wearing the audience down after sending them corkscrewing into europhia, which seems to be exactly what Scorsese and company intended.

SUMMARY: While some might find it too rich for their blood, The Wolf of Wall Street is raucously funny, showcases Leonardo DiCaprio at his best and is entertaining without being inconsequential. This Wolf is on a bull run.