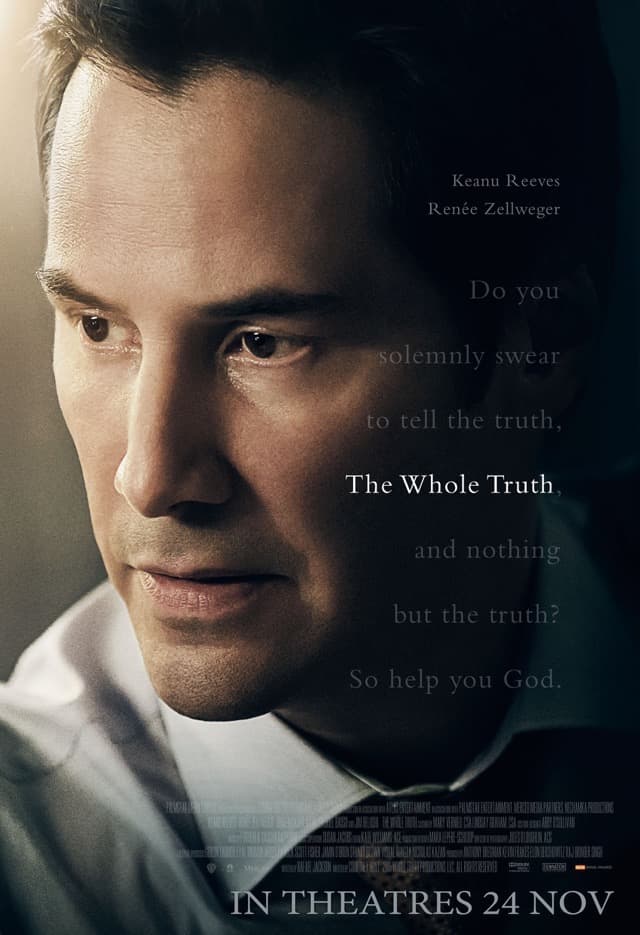 Keanu Reeves played a lawyer in 1997’s Devil’s Advocate, in which he dealt with unexpected supernatural goings-on. In this legal thriller, Reeves in back in the courtroom, sans Al Pacino as Satan. Reeves plays Richard Ramsay, a Louisiana defence attorney. As a favour to his friend Loretta Lassiter (Zellweger), Ramsay defends Loretta’s son Mike (Basso), on trial for murder. Mike is accused of fatally stabbing his father Boone (Belushi), in what appears to be an open-and-shut case. However, as the trial progresses, disturbing aspects about who Boone really was come to light. Ramsay’s new colleague, a young lawyer named Janelle (Mbatha-Raw), tries to get to the bottom of an increasingly tricky case.

The Whole Truth was going to star Daniel Craig, but he abruptly dropped out four days before production was set to begin, with Reeves stepping in for him. We can’t say for sure if The Whole Truth would’ve been better with Craig in the starring role. While the whodunit central to The Whole Truth is mildly intriguing, nothing in the movie reels one in. For all the narrative’s twists and turns, The Whole Truth ends up being dull and generic. One of the pitfalls of a courtroom drama film is that this is a genre that seems more at home on TV than on the big screen. Something like 12 Angry Men doesn’t come along all that often, and it will take more than a run-of-the-mill procedural potboiler to make audiences sit up and take notice. The device of flashbacks told from the point of view of possibly unreliable narrators is a good trick, but one that’s been employed in similar movies before.

There’s no novelty to The Whole Truth, with all the characters fitting familiar archetypes. There’s trouble in paradise as a wealthy family is thrown into crisis, and as a long-time friend of said family, our hero feels an obligation to sort things out. Director Courtney Hunt, who helmed the gritty yet sensitive Oscar-nominated Frozen River, seems to be going through the motions here. She has directed episodes of Law & Order: Special Victims Unit, and this could well have been a middling episode of that long-running series. Curiously enough, the screenplay was initially reported to be by veteran screenwriter Nicholas Kazan, but the end credits state that it’s by one ‘Rafael Jackson’. We couldn’t find any substantial information about Jackson, and Kazan retains executive producer credit, so it’s not unreasonable to speculate that this is a pseudonym. Was Kazan embarrassed to be credited as writing the film?

Reeves has a reputation for being wooden, but he’s found success in the right roles – one needs only look to John Wick for evidence of that. Alas, Reeves’ stilted performance detracts from the film’s potential to be riveting and intense. Ramsay, who spouts lines like, “just assume everyone’s screwing everyone else until proven otherwise,” is meant to have a façade of glib confidence. However, there’s a crisis of conscience roiling beneath the surface, as he’s torn between the incriminating, undeniable evidence and helping his friend. Reeves appears unable to play all these notes, and perhaps Craig would’ve brought more swagger to the part, making Ramsay harder to pin down and therefore more entertaining to watch.

This was Zellweger’s first film after a six-year hiatus, filmed before Bridget Jones’ Baby. She’s the standout performer here, playing a trophy wife who’s vulnerable and lost after her husband’s murder – or is that all an act? Zellweger’s raw, convincing performance means we’re never quite sure one way or another. As the accused teenager, Basso doesn’t get too much to do, since, much to Ramsay’s frustration, Mike chooses to stay silent. When the veil is lifted and we discover what’s going on with Mike, Basso gets his moment to shine. `

Mbatha-Raw injects the dreary proceedings with much-needed energy, and has no problems coming across as attentive and intelligent. The scene in which Janelle cross-examines a character witness is the film’s strongest. While Belushi is fine as a well-off, none-too-pleasant philanderer, it will be a challenge for most audiences to disassociate him from his high-profile comedic roles, most of which are hapless everymen.

The Whole Truth’s big twist should be a gut-punch, but it registers more as, ‘oh well, so that’s what happened. Doesn’t make a whole lot of sense. What should I get for dinner?’ We won’t go into the spoilerific specifics, but the use of sexual assault in the narrative comes off as a cheap shock tactic. It all adds up to an underwhelming courtroom drama that is neither absorbing nor thrilling, but just sort of sits there.

Summary: Keanu Reeves’ flat performance and a lack of urgency are two of several factors that sink this mediocre courtroom drama.