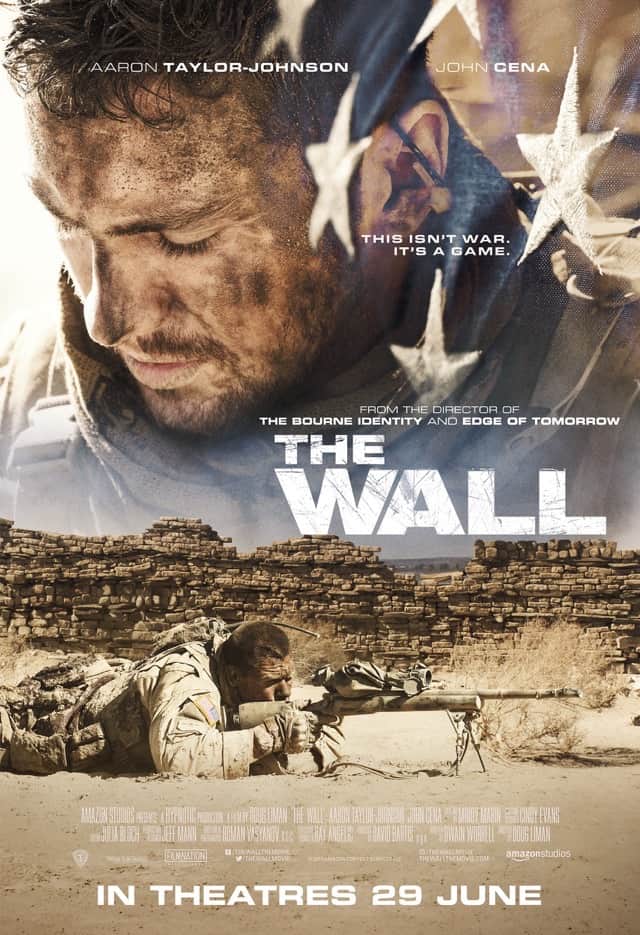 You won’t hear any Pink Floyd in this movie, nor will you witness Matt Damon and Jing Tian fighting of hordes of lizard beasts. Instead, The Wall centres on two American soldiers: Sgt. Allen Isaac (Taylor-Johnson) and Staff Sgt. Shane Matthews (Cena). It is 2007, and in the Iraqi desert, sniper Matthews and his spotter Isaac find themselves targeted by an enemy sniper. This is Juba (Nakli), who taunts Isaac over a radio he has taken from one of his victims. Isaac finds himself pinned down with only a crumbling section of wall for cover, as he engages in a game of wits with his unseen tormentor.

Dwain Worrell’s screenplay for The Wall was the first spec script that fledgling Amazon Studios had purchased. The script landed on the 2014 Black List of most-liked unproduced screenplays, and it’s easy to see the appeal of this project on paper. Worrell taps on his experience as a playwright to craft something more akin to a stage play than your average action-drama flick.

Unfortunately, like the titular structure, The Wall begins to fall apart. It soon becomes clear that the premise, while clever, is stretched way too thin, unable to sustain a feature-length film. For most of the movie’s duration, the protagonist and antagonist communicate only by radio, and despite director Doug Liman’s best efforts, audiences will start to feel restless. It sure feels longer than its 90 minutes. Liman, having helmed The Bourne Identity, Mr. & Mrs. Smith and Edge of Tomorrow, knows his way around an action sequence, but The Wall serves up precious few moments of action.

Liman does a fine job of placing the audience in the moment – one’s mouth might start to feel a little parched looking at Taylor-Johnson’s and Cena’s faces caked in dust. Viewers who are starting to feel summer movie season fatigue might be drawn to this minimalist action thriller, but The Wall just doesn’t have enough tricks up its sleeve. Contrast this with, say, last year’s The Shallows, in which Blake Lively was essentially being held hostage by a shark. In that film, the obstacles flung at the protagonist were varied enough, the threat visceral enough and the environment deceptively beautiful enough to hold our attention. Despite being wily and lethal, the enemy sniper Juba is no great white shark.

Taylor-Johnson commits to this and does look like he’s being put through absolute hell. Cena plays a supporting role, and not too much is required of him acting-wise. This reviewer thinks Cena’s true calling is comedy, and while there’s some banter between the two, this is mostly serious stuff. Nakli delivers what amounts to a purely vocal performance. Juba is erudite and crafty, quoting Edgar Allan Poe to Isaac while attempting to get under his skin and into his head. While a fun dynamic between tormentor and victim develops, Juba doesn’t feel like a multi-faceted character, even when we learn his requisite tragic back-story. The character is apparently based on an alleged sniper – it is unclear whether ‘Juba’ is a real individual, a pseudonym shared by several snipers, or merely an urban legend cooked up for propaganda purposes.

This reviewer was willing to be strung along by The Wall, even with its lulls and treading water (in the desert, no less), provided there was a spectacular payoff. Alas, the ending is a cop-out, and marks the film as an ultimately hollow experience. Despite a competent leading turn from Taylor-Johnson and a convincingly harsh desert milieu, it ultimately proves impenetrable.