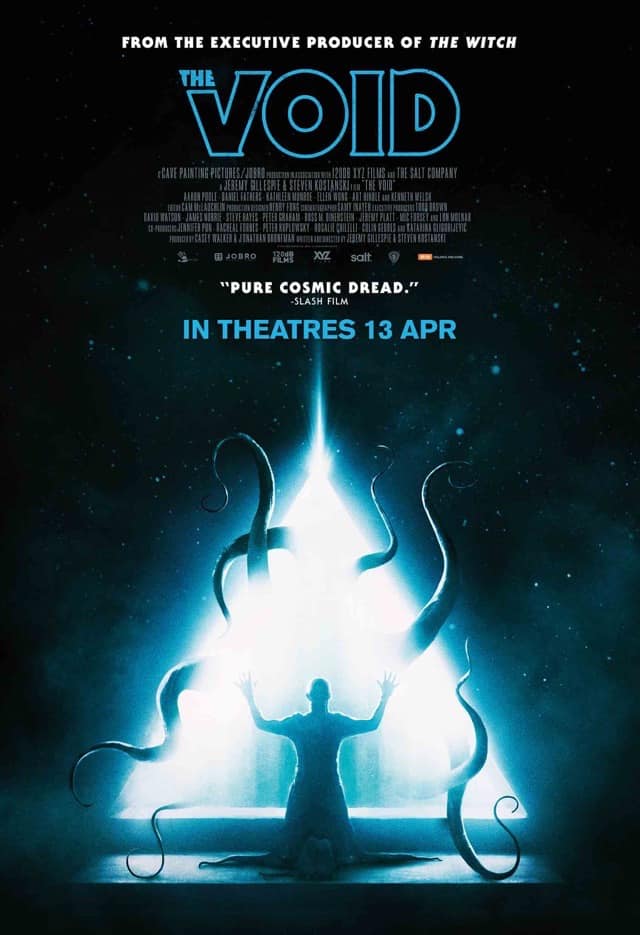 Unspeakable terrors lie beyond this plane of existence in this horror flick. Police officer Daniel Carter (Poole) discovers a bloodied man named James (Evan Stern) crawling down a deserted road, and rushes the man to the nearest hospital. As it’s late at night, the hospital has a minimal staff, including Dr. Richard Powell (Welsh), aloof medical student Kim (Wong) and staff nurse Allison (Munroe), who happens to be Daniel’s estranged wife. In the waiting room is a pregnant teenage girl named Maggie (Munro) and her grandfather Ben (James Millington). Eerie figures in white robes and hoods, the front of their hoods emblazoned with a solid black triangle, surround the hospital. The staff and patients start exhibiting erratic, violent behaviour, and as Daniel uncovers the truth behind the spooky goings-on at the hospitals, he is forced to confront horror on an unfathomable scale.

The Void comes from Canadian filmmaking collective Astron-6. The group has popped up on the radar of genre aficionados thanks to their various low-budget horror-comedy short films. They were also behind the deliberately schlocky Manborg, a 2011 film that it appears the better-known Kung Fury owes quite the debt to. With The Void, Astron-6 attempts a graver, more serious brand of horror, while still paying homage to the filmmakers and storytellers they idolise. Writer-directors Jeremy Gillespie and Steven Kostanski were also involved in various other aspects of the film, from composing to editing to creature effects. When not making their own films, Gillespie has worked in the art departments of films including Pacific Rim and Suicide Squad, while Kostanski has been a special effects makeup artist on Crimson Peak, Suicide Squad and the Hannibal TV series.

While The Void boasts a respectable amount of truly disgusting gore and inventive, cleverly-executed practical creature effects and prosthetic work, it is an unpolished product that’s very rough around the edges. Perhaps this is a part of its charm, but even with the filmmakers’ dedication fully evident, this gives off a bit of an amateur vibe. The overarching concept is ambitious, recalling the Eldritch abominations of H.P. Lovecraft and John Carpenter-directed horror films like The Thing, as well as countless ‘video nasty’ horror films from the 80s and 90s. In the Mouth of Madness, a Carpenter-directed adaptation of a Lovecraft story, seems like it had a strong influence on Gillespie and Kostanski, as did Carpenter’s action suspense flick Assault on Precinct 13.

While the actors are not the main draw and the film’s limited budget means a lack of access to stars, nobody in the cast is terrible. Poole has enough of a leading man quality without coming off like an invincible action hero, while Munroe has a warmth to her that’s comforting until the horror kicks into high gear. Wong, a.k.a. Knives Chau from Scott Pilgrim vs. the World, puts in a fun performance as the bored millennial flung into utter chaos. Canadian character actor Welsh from Twin Peaks is on hand to lend genre cred, though the film has plenty of that on its own. The characters aren’t flat-out unlikeable, but they aren’t endearing enough to want to actively be around either.

Gillespie and Kostanski know exactly who their audience is, and this will find a cult following at horror film festivals and when it eventually gets on Netflix. For the uninitiated, however, The Void is disorienting and incoherent. There’s an effort to explore the psychology of the characters in addition to serving up a surfeit of stomach-turning body horror, but it’s too restless and frenetic for its own good. We know that “elegant” and “slimy tentacle monsters bursting out of abdomens” don’t necessarily go together, but The Void could have benefitted from a more elegant approach, letting the mythos build organically instead of unleashing it on the audience at one go.

Summary: Audiences who, like this film’s directors, grew up on 80s horror flicks they were too young to watch, will lap this up. However, the ideas at play are almost as messy as the assorted gore.