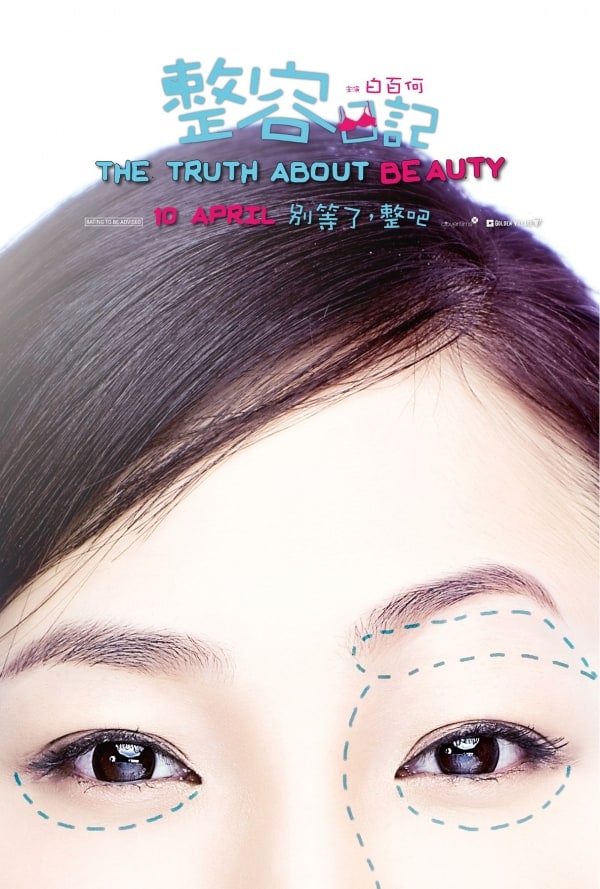 Anyone expecting The Truth About Beauty to be a fun, silly, inconsequential romantic comedy should be warned. This ostensibly cheerful film about appearances, love and plastic surgery often plays more like a horror movie. The film’s characters, and many of its purportedly romantic moments, get lost in a lacklustre script and the terrifying implications of its themes.

Guojing (Bai Baihe) is a young lady struggling to make her voice heard in the newly image-conscious China. With thousands of graduates vying for the same jobs, educational qualifications are no longer enough: less physically appealing candidates find themselves falling by the wayside. After going under the knife for the first time, Guojing manages to secure a job – where she promptly meets Raymond (Ronald Cheng), who seems to be attracted to her brains and not just her beauty. But, for all her growing successes at work and in her love life, Guojing can’t quite shake the belief that she needs to get more work done to be worthy of her job and her man.

There are a handful of interesting insights packed into The Truth About Beauty. The premium placed on appearances – as opposed to less tangible qualities such as intelligence and personality – is depressingly reminiscent of a society that still places outrageous, unrealistic demands on people, especially women.

But it’s hard to warm up to a film that never really seems to get to grips with its own story and characters. Guojing is plainly suffering from some pretty severe psychological issues, but these are never really explored fully because she’s also trapped in an awkward love story. As a result, her chilling obsession with slicing and dicing her face and body is played for punchlines and easy laughs, and you can just tell she’s headed for a happy ending when one really shouldn’t exist.

Indeed, all of the film’s melodramatic reserves are dumped unceremoniously upon the character of Guojing’s best friend (Zhang Yao), whose own decision to drastically alter her appearance meets with the troubling consequences that the leading lady is spared. In contrast, Guojing seems to enjoy an unrealistically easy and record-breaking recovery time for every single one of her procedures.

Raymond is an equally problematic character: he’s meant to be charming and open-minded, but doesn’t seem to have much of a soul to call his own. At least his contrary attitude to plastic surgery – he doesn’t like girls getting it, but admits he won’t have fallen for Guojing if she didn’t look the way she did – rings true.

Tucked away within the frustrating and ultimately empty The Truth About Beauty is a worthy message about accepting yourself for who you are, without feeling the need to re-arrange your facial features to be accepted in society. Unfortunately, given that it’s also played as some kind of macabre rom-com, the film winds up negating its own point. It seems to suggest that Guojing is lucky and, since she can and does get away with it, the pros of cosmetic surgery far outweigh its cons. That ought to trouble you for a while after the credits roll.

Basically: More horror story than romantic comedy, this would probably have worked better as a full-on drama.