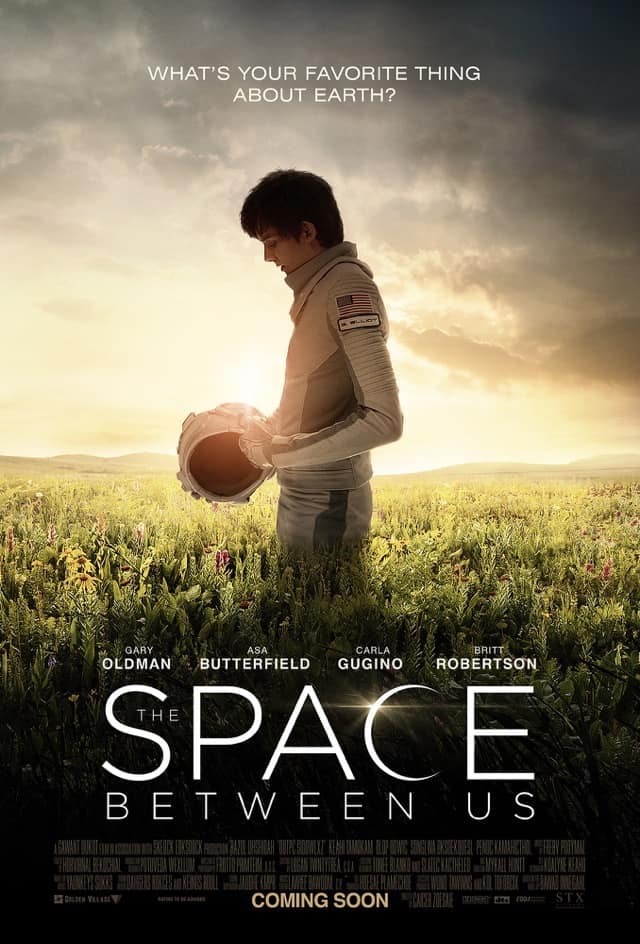 Ender’s Game might not have been successful enough to warrant a sequel, but Asa Butterfield is back in a spacesuit anyway in this sci-fi romance. Butterfield plays Gardner Elliott, who has spent all of his 16 years living in the East Texas habitat on Mars, raised by the scientist Kendra (Gugino). Gardner’s mother Sarah (Montgomery) was an astronaut on the pioneering manned mission to Mars, who died giving birth to Gardner. Nathaniel Shepherd (Oldman), the owner of Genesis Space Technologies, and mission director Chen (Wong) disagree over whether to go public with Gardner’s existence. Gardner befriends Tulsa (Robertson), a disaffected teenage girl, online. When Gardner arrives on earth, he convinces Tulsa to help him search for the father he’s never known. When Kendra, Nathaniel and Chen conclude that Gardner will be unable to withstand earth’s gravity and atmosphere, they must save him before it’s too late.

The premise of a kid who’s spent his whole life on a different planet and becomes a fish out of water on earth has tremendous potential for drama and comedy, unfolding within a sci-fi context. Director Peter Chelsom, whose credits include Serendipity, The Hannah Montana Movie and Hector and the Search for Happiness, approaches this as a teen romance. There are several scenes set on Mars and there’s some vaguely credible techno-babble tossed about, but the bulk of the film ends up being a largely ordinary road trip love story. While it’s admirable that this is a character drama at heart, the film’s tone lands somewhere between awkward-cute and melodramatic rather than genuinely stirring or thought-provoking.

We learn from Sarah’s memorial plaque on the Martian surface that she died in 2018. Gardner is 16 years old, so the bulk of the film takes place in 2034. It turns out that the United States of 2034 is barely distinguishable from that of 2017, and it seems due more to budget constraints than anything else. There’s a transparent laptop or two, but other than that, there’s nothing in the scenes taking place on earth to indicate that this is set in the future. It’s a bit of a shame, given that there’s attention to detail paid in other aspects: for example, Mars is accurately depicted as having a weaker gravity than earth, something which The Martian dispensed with because it would be too labour-intensive to portray consistently.

Butterfield can play endearingly awkward in his sleep, and is fun to watch here. While there are too many twee fish out of water moments in which Gardner is awestruck by the most mundane things, there’s a real sweetness and sincerity that Butterfield brings to the part. The relationship between Gardner and Tulsa is central to the film, and while attempts at character development are made, the romance progresses too quickly and too Hollywood-y to be believable.

Robertson is a lively performer – her facial expressions in Tomorrowland reminded this reviewer of a Pixar character come to life. Both Tulsa and Gardner haven’t had much meaningful human connection in their lives, and find solace in each other. However, the journey from rom-com bickering to heartfelt professions of love takes a remarkably short time. This means that the relationship drama is not entirely successful at grounding the more fantastical elements of the story.

Oldman is never a boring actor to watch, but his performance here is broader than required, with too much flailing and bluster for us to take him seriously as the boss of a spaceflight technology firm. Gugino’s Kendra is warm and intelligent, but unsure of how to connect to Gardner as his maternal figure. Wong doesn’t get to do much beyond arguing with Oldman, but it did let us imagine that Commissioner Gordon was having a heated disagreement with Hugo Strange.

The Space Between Us isn’t an adaptation of a Young Adult novel, but it sure feels like one – perhaps it should be called The Fault in Our Mars. As a quirky teen-aimed romance, The Space Between Us has its charms and its leads are appealing enough to make up for the cheesiness and soap opera melodrama, especially in the concluding big reveal. It’s too bad that the film fails to meaningfully examine the themes of belonging and the role of scientific advancements in how we connect to other people. A science-fiction film that focuses on relationships rather than wham-bam spectacle or mind-bending metaphysics is a novel prospect, but The Space Between Us misses the opportunity to be sublime and profound.

Summary: The Space Between Us tries and barely succeeds at blending coming-of-age teen romance with science fiction, but it attains lift-off thanks to its endearing young leads.