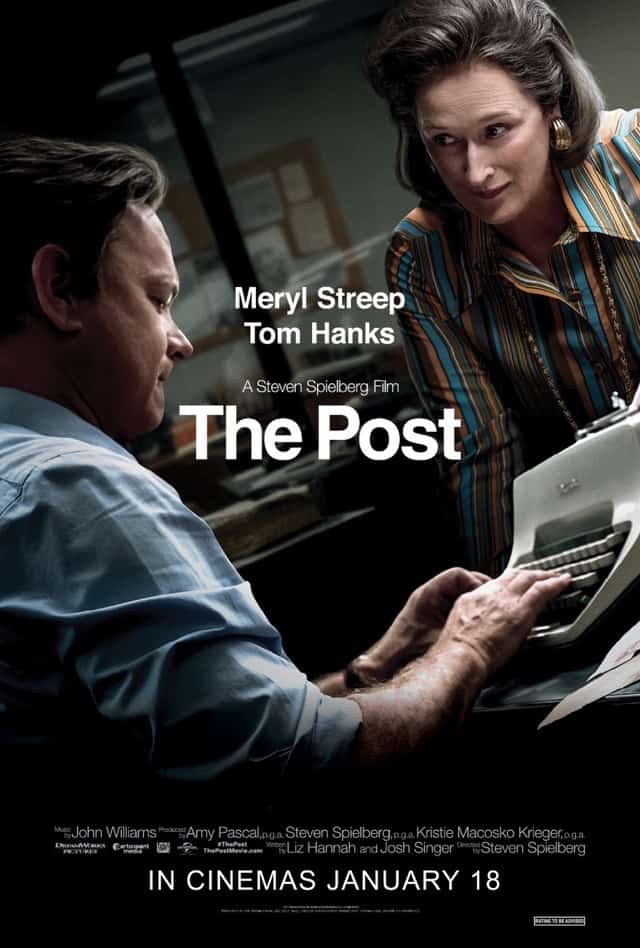 It’s an odd thing to say about a film set in 1971, but The Post is a movie that sits very firmly in the here and now. The battle royale at its heart – a face-off between the press and the President of the United States that’s almost half a century old – wouldn’t have felt quite as urgent or relevant just two years ago. The Post matters today, at this moment, because – at its very best – the film manages to tie past and present together in a way that will chill and thrill the spirit in equal measure. The power of its message makes it easier to overlook the ways in which The Post falters, from an occasional lack of nuance to its tendency to tell rather than show.

And what a lot of telling it does in its first half. We’re introduced – via copious amounts of exposition – to the film’s many puzzle pieces: Kay Graham (Meryl Streep), fretful widow trying to do right by her late father, husband and the newspaper she inherited from them; Ben Bradlee (Tom Hanks), her fiery editor-in-chief who’s desperate to take The Washington Post into the big leagues; and the Pentagon Papers, classified government documents that reveal just how much has been kept from the American public about the country’s decades-long involvement in the Vietnam War. 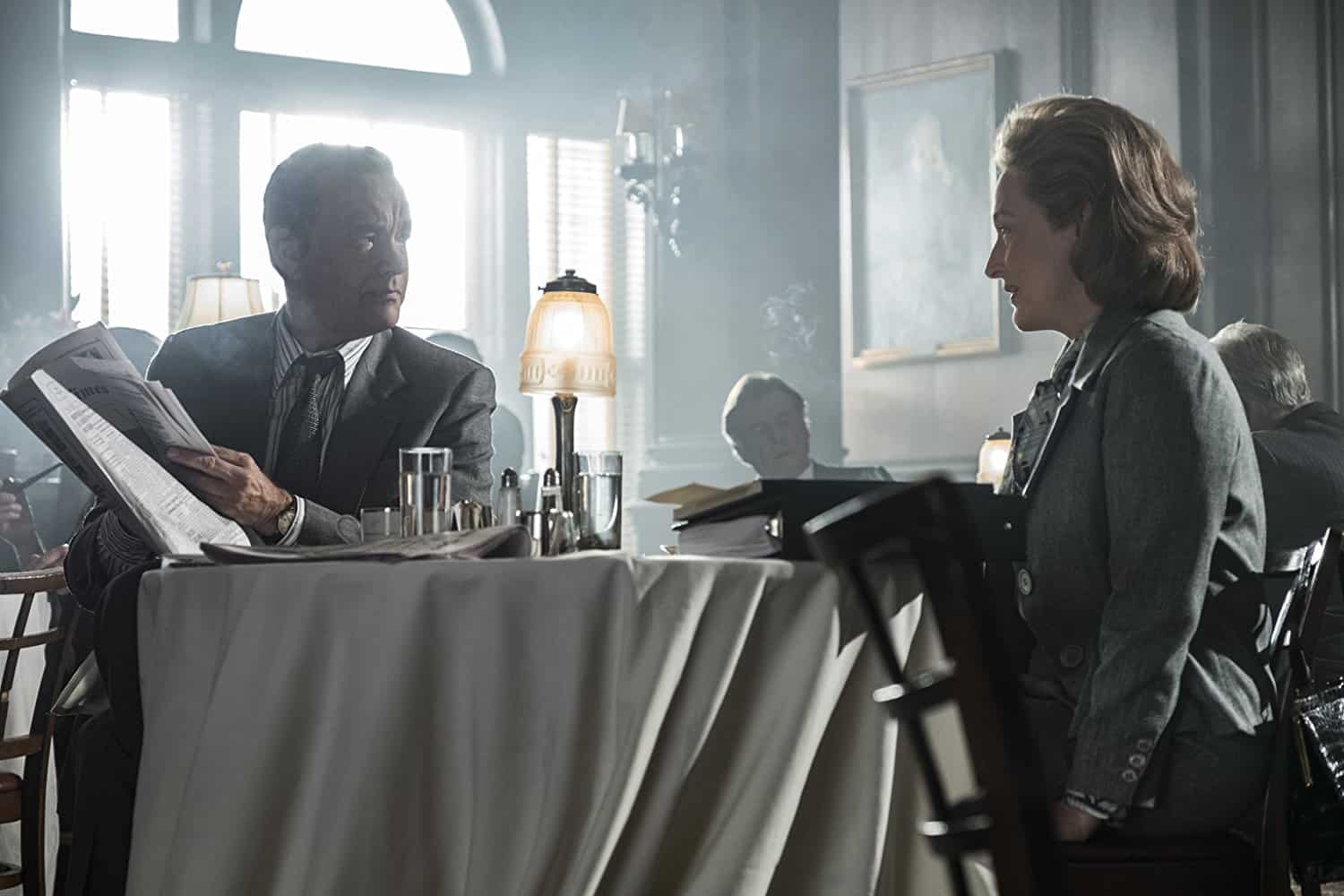 In the hands of a lesser director than Steven Spielberg, the first act of The Post would have been an interminable slog. It’s hard to conjure up tension when the narrative isn’t being very cooperative – which it isn’t, because, in reality, it was actually The New York Times that spent months cracking the biggest story of the year. For much of its first half, the film tries to find drama where there isn’t very much of it on hand. The most subterfuge we see is Ben’s decision to send an intern to infiltrate The Times to find out why his rival’s top reporter hasn’t published a story in months.

But Spielberg is nothing if not a master craftsman, and he uses the quieter moments at the start of the film to establish and explore character. We bear witness to the way in which Kay is routinely dismissed, as a person and a voice, by all the men who sit on the board of her own company. We laugh as Ben takes a stand against the White House, even on an issue as trivial as The Post being barred from reporting on the marriage of President Nixon’s daughter. We watch Kay and Ben interact – the former worrying about the bottom line, as the latter defends the paper’s headlines. 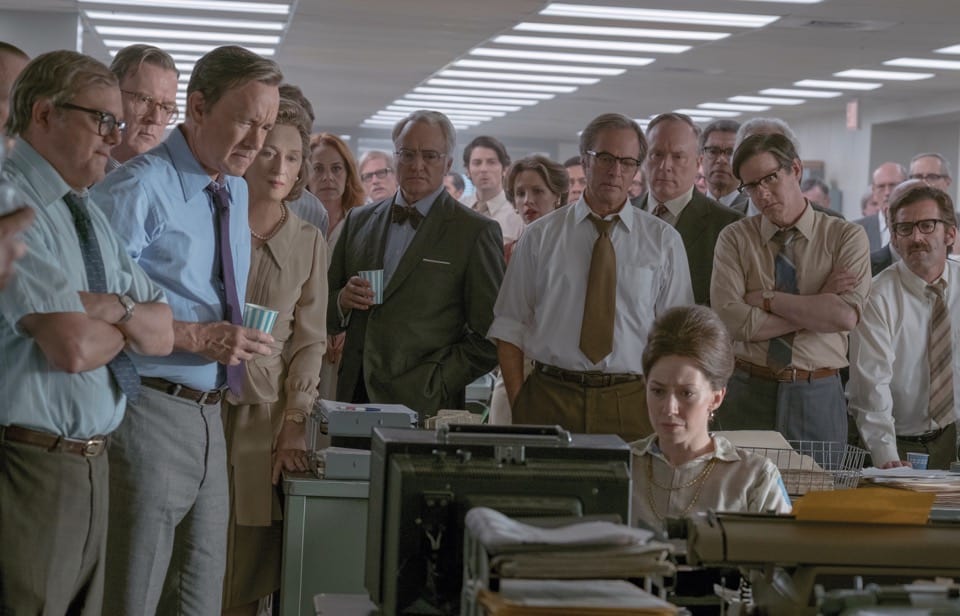 The film really comes alive when it shifts into higher gear about halfway through. Suddenly, it slips from amiable drama to heart-gripping thriller, as the big story finally comes to The Washington Post at a moment when the stakes for everyone involved couldn’t be higher. In the very same week that the newspaper is about to be listed on the New York Stock Exchange, assistant editor Ben Bagdikian (a terrific Bob Odenkirk) tracks down the source who leaked the Pentagon Papers. With The New York Times barred from further reporting by a court injunction, Kay must decide whether to defy the White House to publish – and risk irreparable damage to her family’s company and legacy.

At this point, The Post becomes an absolute thrill to watch. As The Post’s team of reporters – played by a stable of fine comedians and character actors like David Cross and Carrie Coon – struggle to pull their story into shape, Kay sits in the eye of a hurricane of men’s opinions: Ben urging her to publish on principle, as misogynistic board member Arthur Parsons (Bradley Whitford) and even trusted advisor Fritz Beebe (Tracy Letts) advise caution.

It’s a credit to Spielberg and his fantastic cast that they inject these defining moments with genuine doubt and suspense. Streep is marvellous, as always, radiating Kay’s worry and despair while also hiding her character’s quiet strength in plain sight. She’s so good that you can almost buy into a completely unsubtle scene – in which she descends the courtroom steps before a line of young girls gazing upon her with unvarnished adulation – that anoints Kay as a feminist hero. Hanks is similarly effective as a brash, principled newsman who takes the value of truth so much for granted that he needs to be reminded – especially in a lovely scene with his wife, Tony (Sarah Paulson) – that integrity does not come without its own incalculable costs.

Spielberg cleverly finds tension and hope, as well, in moments that no longer exist in this age of digital media, when just about anybody can toss words into the vast vacuum of the Internet. There is an almost hypnotic, hallowed magic to the sheer effort it used to take to tell the truth, which comes through clearly in the clatter of typewriters, the pressing of ideas into hot type, and the storm and churn of men and machines producing stories and newspapers that have the power to change the world. 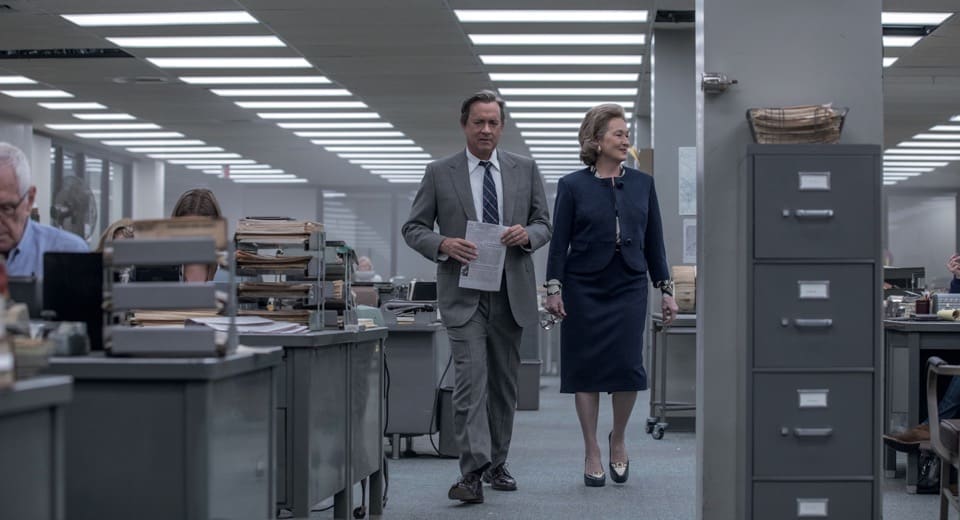 Taken altogether, The Post works precisely because it is a film very much made for and about this time. It’s not perfect – you probably won’t be able to completely shake the feeling that the final screenplay was a draft or two away from greatness. But, at this peculiar, particular moment in history when the incumbent President of the United States regularly challenges the very fabric of reality through his Twitter feed, there is a raw, incisive power to this film that allows it to rise above its flaws. In this world, at this time, The Post – and its spirited defense of truth, integrity and accountability – matters.

Summary: At any other time, The Post might be considered a minor entry in Steven Spielberg’s filmography. Today, right now, it’s a story that will thrill, inspire and resonate – as it rightfully should.