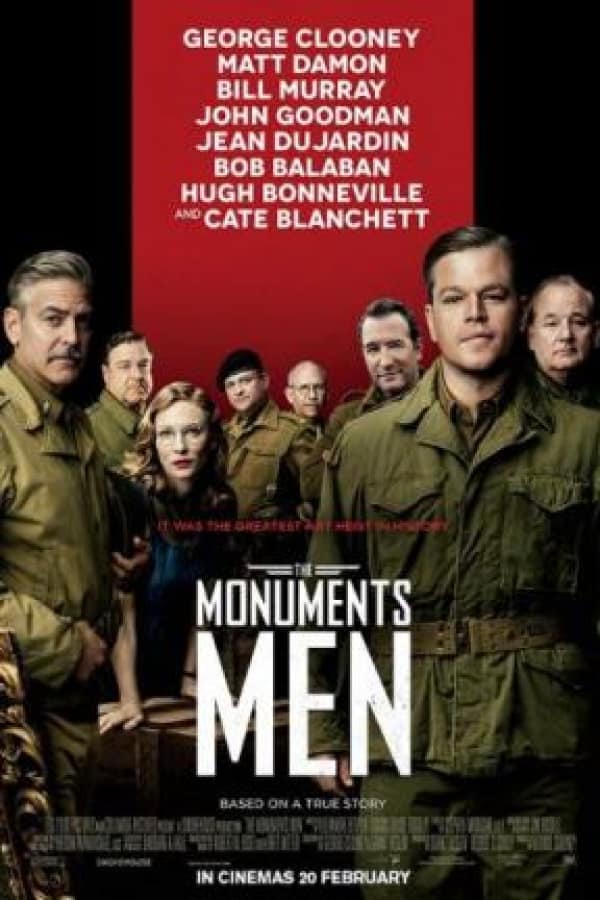 Everyone was expecting great things from The Monuments Men. Practically every member of its astounding cast could carry his or her own film, and George Clooney has gained a reputation in recent years for crafting solid, intelligent, powerful films that are easy favourites on the awards circuit. Then, the first sign of trouble appeared on the horizon: the film’s release date was changed from a Christmas 2013 slot (prime positioning for the Oscars) to February this year (effectively eliminating it from the competition). The delay was ostensibly because the film’s visual effects were more complicated than anticipated. But the speculation began nonetheless: Clooney had somehow managed to muck it up.

That’s perhaps why critics have generally reacted so negatively to the film since its release: if Clooney is waving a white flag of surrender, what right has The Monuments Men to be much good? Sky-high expectations were immediately transmuted into long-suffering derision: Clooney’s film, it’s been argued, is poorly structured, annoyingly episodic, and tonally inconsistent, hopping between comedy and tragedy without achieving much success on either front. If most critics are to be believed, Clooney has completely wasted this golden opportunity – not to mention the cast of a lifetime.

What’s comforting about watching the actual film is discovering that The Monuments Men is, on the whole, a great deal better than the extremes of expectation and opinion would suggest. It’s not a full-on classic by any stretch of the imagination, but neither is it a monumental disappointment. For what it has chosen to be, it’s very good: a look at the quieter side of war, at a battle fought for the soul of humanity – as captured in its artistic achievements – that is full of hope, but also grieves for the losses the world suffered as a result of World War II.

Inspired by true events, the film opens on Lt. Frank Stokes (Clooney), a Harvard professor trying desperately hard to convince President Roosevelt of the need to thwart Adolf Hitler on a non-military front. Invaluable works of art across Europe are being systematically stolen by the Nazis as part of Hitler’s plan to build a Führer Museum of his very own. Stokes gets the go-ahead to form the Monuments Men: a rag-tag group of museum directors, curators and art historians, whose sworn mission is to uncover Hitler’s smuggling operation and recover the stolen artworks before they disappear forever – or are destroyed come the end of the war.

There’s certainly quite a bit of truth in saying that The Monuments Men suffers somewhat from patchy, episodic plotting. The film occasionally drifts from moment to moment, some of its logic unravelling the longer you think about it. (After Granger is rebuffed by Claire a few times, what does he actually do in Paris?) There’s a climactic scene in which Lt. Donald Jeffries (Downton Abbey‘s Hugh Bonneville) fights to keep Michelangelo’s exquisite Madonna and Child statue out of Nazi hands – but it’s so choppily edited together that audiences might find themselves puzzled about what exactly happened.

But The Monuments Men is also a real delight: a movie about war that brims over with hope and humanity, while never losing sight of the very real horrors and consequences of heading into battle. The film’s many moments of sweet, gentle levity – Granger’s clumsy attempts to speak French (wonderfully subtitled onscreen), Campbell and Savitz bickering but also coming to understand each other – are balanced out by the heartache and sacrifices of these Monuments Men. These are men – and one woman – who could easily have sat out the war, most of them too old to be enlisted. And yet, here they are, in the trenches of a very specific fight that not many will understand, but which everybody will eventually come to appreciate.

This is where Clooney’s starry cast shines the brightest. They help him carry the film, turning their tiny pockets of screen-time into something more, something deeper. Murray nails all his comedy bits, of course, particularly when he’s strapped into a dentist’s chair – but he will break your heart when he listens to a phonograph from home, one which also serves to literally underscore the darkest, saddest sacrifice the war requires of young, able-bodied men. Clooney himself manages to sell a few overly stirring, inspirational speeches about the hallowed mission of these Monuments Men. Damon and Blanchett, too, make magic out of their scenes together – her Claire, in particular, is a marvel of strength and determination, unflinching around Nazi scum and in the face of direct gunfire, only slightly undone by the awkward hint of romance that sneaks into the script.

To be honest, it’s easy to pick apart The Monuments Men – it’s not as tightly woven or as well-paced as it could be, its characters often relying more on their actors than the script for a little depth and complexity. It’s heavy-handed and light-hearted, all at once. But that’s also part of the film’s considerable charm: it credibly pushes a message of unyielding optimism in the face of crushing odds and Nazi efficiency, one that’s threaded through with a bittersweet, rich vein of humour. For all its flaws, The Monuments Men clearly demonstrates how the greatest of exigencies can produce as much hope as they can horror.

Summary: Perhaps it’s not quite monumental, but it’s certainly far better than you might have been led to believe.