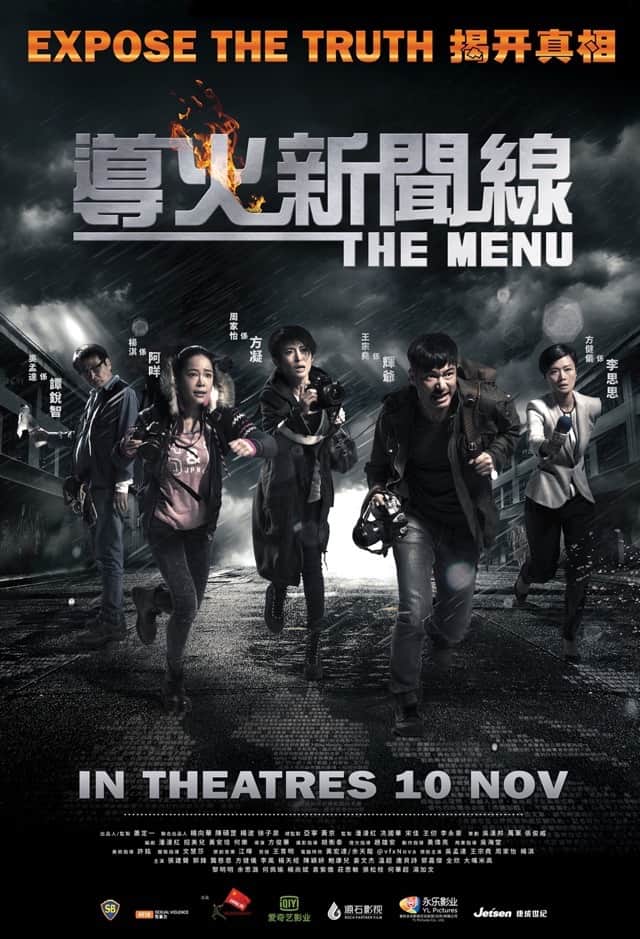 It has been said that Hong Kong cinema has been on the decline since the late 1990s, never quite regaining its former golden glory days back in the 70s, 80s and early 90s. Some blame it on rampant piracy, some lament that it is overproduction resulting in quantity over quality, while others bemoan how more and more filmmakers opt to over-emulate Hollywood to over-CGI, often resulting in focusing on style over substance and losing the heart and spirit that made successful Hong Kong films what they were in yesteryears. So it is great pleasure and surprise that every now and then a select few sleeper critically acclaimed films comes along and proves there is still hope for the Hong Kong film industry after all. The Menu is one of these films.

Similar in essence to the 2016 Oscar Best Picture winner film Spotlight, The Menu also follows the struggles, dilemmas and battles of a team of journalists as they race against time to reveal the truth behind a scandalous sex crime that had been covered up by a corrupt legal system. Whilst Spotlight featured the shocking true story of The Boston Globe’s “Spotlight” team’s exposure of the paedophile sexual abuse scandal in the Roman Catholic archdiocese of Boston, whereas the central story of The Menu is a fictitious case, the latter is no less thought provoking and compelling as the former.

Sequel to the 2015 Hong Kong Television Network (HKTV) drama series of the same title, The Menu film continues following the editorial team for Smart Post as they pursue the truth behind a brutal rape-murder case. Despite damning evidence, the murderer Ko Yin Yan had been acquitted having bribed the key witness into giving false testimony. Although the witness later confessed this to the deceased’s father Tam Yui-chi (Ng), Tam was unable to bring the case to trial again due to the procedural defence of “double jeopardy”.

Pushed to the brink of despair, Tam who is a TV station technician holds Ko hostage, with the entire crew of the talk show programme that Ko was invited to be a guest on, threatening to blow them all up, unless the government immediately abolished the double jeopardy rule and retries Ko in court. To worsen the predicament, standing in opposition to Smart Post are the journalist team behind Flash Post, determined to outdo their competition by any despicable means possible, even if it meant putting the lives of innocents at jeopardy.

Impressing in his role as Tam is Ng. Known to Gen Xers as the long-time comedian collaborator of Stephen Chow, Ng has since become a better-rounded actor, even garnering a few acting awards for his non-comedic dramatic roles along the way. In this film, Ng convincingly portrays the wrath, desperation and despair of a man pushed to his limits by the Hong Kong legal system in seeking justice for the wrongful death of his daughter.

Besides Ng, the rest of the cast, especially the returning stars from the TV series (Wong, Chau Teung and Fong) equally held their own, delivering stellar, believable performances as the rivalling journalists of Smart Post and Flash Post, no less impressive than the multi-awards winning or nominated performances of the cast of Spotlight.

Acting kudos aside, high praise has to be accorded to the writing team helmed by Pun Man Hung, as well as the direction of Fong too. Carrying forward their great work from the original goggle box series to this silver screen sequel, the creative team strikes the right balance, not only creating and executing a highly entertaining, engaging and thrilling dramatic film, but also one that implores the audience to question how important integrity is in the field of journalism.

Look out for the memorable scene in which Flash Post journalist Fung (Yeung) chances upon a little girl unaware of her perilous predicament, being seconds away from being crushed by a collapsing structure that is literally hanging by a thread. Instead of rescuing the girl, as what Smart Post’s bleeding heart news editor Lok Ka Fai (Wong) did right in the nick of time, Fung callously chose to stand poised and ready to capture the ominous scene about to unfold. No better than Fung, his editor-in-chief at Flash Post, Sun Yun Ling (Yu) even looks to capitalizing on the tragedy of the hostage situation by demanding her staff to be the first in posting obituaries on their news website of any victims who perish, so as to beat Smart Post at click rates.

Referencing the Pulitzer Prize winning photojournalist’s famous photo, “The Starving of Sudan”, which depicted a vulture eyeing as its prey a frail little girl who had collapsed stricken by famine, through the character of Smart Post photojournalist Mallory Mak (Yeung), this film challenges its characters within and even the audience to consider what would they do if they were in that scenario. Whether to forgo the photo and save the girl, to shoot the photo for the mercenary sake of its media and market value, or to look at the big picture and shoot the photo so as to create public awareness and trigger action to salvage the crisis?

In response to this dilemma, the film re-evaluates the philosophy of “Stay Hungry. Stay Foolish”, a quote taken from former editor of the Whole Earth Catalog Kevin Kelly that was made famous by Steve Jobs in his 2005 Stanford Commencement speech. In one harrowing scene, a mob of photojournalists fanatically chased down a minibus that has spun out of control as a result of its driver suffering a heart attack, not to prevent but to capture on camera the ongoing chaos and aftermath of the tragic accident that ensued. This is but one of many moments in the film that reflect and magnify just how ugly the truth of the insatiable appetite of today’s modern press is for attention grabbing headline news in its pursuit of monetary profit and readership or internet hits numbers.

In spite of this, as Smart Post’s interim Editor-in-Chief Fong Ying (Chau) aptly sums up at the end of the film, it is crucial that besides staying hungry for news and ambition, journalists should also maintain a sense of “foolishness”. Going against the herd mentality and fighting for what might not be to your or your publication’ best benefit might be deemed to be “foolish”, but it takes guts to do the right thing morally and ethically. If media workers should come away from anything from this film, this underlying message should be it.

Summary: The Hong Kong film equivalent to this year’s Oscar Best Picture winner, you don’t need to be a fan of the HKTV drama series to be wowed by this thought provoking and inspiring film sequel that explores the extent to which journalism is willing to sacrifice humanity and ethics in the pursuit of readership numbers.