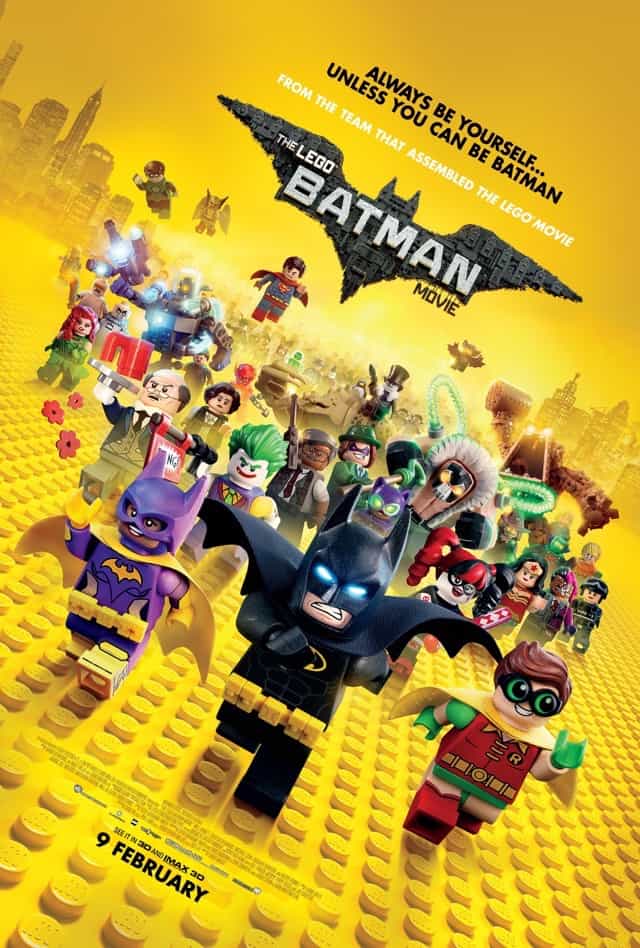 He puts the ‘bat’ in ‘brickbat’ and serves as a stumbling block to Gotham City’s evildoers: he is Lego Batman (Arnett). When the Joker (Galifianakis) leads a collection of Batman’s rogues gallery in an assault on Gotham, Batman is confident that he alone can take them on. Police Commissioner Jim Gordon (Elizondo), whose primary job has been activating the Bat-signal to summon Batman, retires. Replacing Gordon is his daughter Barbara (Dawson), who calls attention to Batman’s inefficacy in keeping Gotham’s streets crime-free, much to Batman’s chagrin. Alfred Pennyworth (Fiennes), loyal butler to Batman/Bruce Wayne, sees Batman’s self-aggrandizement as a façade. After accidentally adopting orphan Dick Grayson (Cera), Bruce must learn that relying on others in the face of overwhelming odds isn’t a sign of weakness, eventually teaming up with Robin/Dick Grayson, Alfred and Batgirl/Barbara Gordon to face an other-worldly threat.

The Lego Batman Movie is a spin-off of 2014’s The Lego Movie, and is directed by Chris McKay, who served as an animation co-director on The Lego Movie. McKay has also directed multiple episodes of Robot Chicken, the stop-motion sketch comedy series which lampoons comics, cartoons and other aspects of geek culture. The Lego Batman Movie is reminiscent of Robot Chicken in its style of humour, which is heavily reference-based, albeit more kid-friendly than Robot Chicken. There are shout-outs to elements both well-known and obscure of the DC Comics universe and beyond, which are rewarding to spot. However, since this is based on a line of toys and primarily made to sell toys, there are moments when it’s evident that The Lego Batman Movie struggles to strike a balance between appealing to geeks and appealing to children.

The animation by Animal Logic Studios is done in the same style as The Lego Movie, which emulates stop-motion animation using computer graphics. Each frame bursts with lovingly-rendered detail and the film is consistently eye-catching, if not quite as creatively designed as The Lego Movie. This version of the Batcave is delightfully outlandish, packed with needlessly extravagant machinery and containing a ludicrous number of vehicles with a ‘Bat’ prefix in their names. Of the various and sundry modes of transportation utilised by the Dark Knight in this movie, something called ‘the Scuttler’ is the most interesting. It’s a mecha that walks on four stilt-like legs and expresses emotion with dog-like ears which can droop to indicate sadness.

There is a Batman for all seasons, and part of the character’s longevity is his malleability. The Lego Batman Movie does a fine job of gently poking fun at various incarnations of the Caped Crusader, from the 1966 TV show to the 1989 film to the recent Batman v Superman. At times, it’s evident that this wants to be Deadpool for Juniors, the film begins with Batman breaking the fourth wall and providing voiceover as the opening logos roll. Arnett’s performance, impeccable in its timing and just the right pitch of gruff, suits the tone of the film to a tee. Fiennes’ drolly prim and proper Alfred serves as a wonderful complement.

Galifianakis’ turn as the Joker is passable, but is far from the high bar set by Mark Hamill, whose indelible vocal performance as the Clown Prince of Crime has made him the definitive voice of the Joker in many fans’ eyes (make that ears). The film does hint at the psychosexual nature of Joker and Batman’s mutual obsession with the other, which Batman vehemently denies. Jenny Slate’s Harley Quinn is a disappointment, lacking the character’s signature Brooklyn accent.

While Batman’s rogues gallery is generally agreed on as being the most dynamic in all of comics, these villains don’t make too much of an impact in The Lego Batman Movie. Sure, the film crams a lot of them in, but the likes of Catwoman, Poison Ivy, Clayface, Mr. Freeze and anyone who isn’t the Joker seem relegated to the background. It is fun to see D-listers like Condiment King and Kite-Man onscreen. Bane speaks in the same accent Tom Hardy affected for The Dark Knight Rises, even more amusing given how Bane was quoted in a certain inaugural address.

One of the funniest aspects of the story is how Bruce Wayne adopts Dick Grayson completely by accident. The interpretation of Dick as a wide-eyed, bespectacled dork is a departure from the source material, but Cera’s inherent awkwardness as a performer suits this version fine. This reviewer enjoyed the changes made to the Barbara Gordon character, who is introduced as her father’s successor as Police Commissioner long before she dons the Batgirl costume. Batman has romantic designs on Batgirl – this is a pairing which many fans understandably find icky, and was a major factor in the backlash against the animated film The Killing Joke. Thankfully, Barbara does not reciprocate Bruce’s advances. The stunt casting of Mariah Carey as Mayor MacCaskill is completely unnecessary.

The Lego Batman Movie’s final act does involve a giant portal opening up in the sky, unleashing destruction that the townsfolk must scurry away from. There are some surprises as to who or what emerges from said portal, but even given that, it’s easy to tune out during the climactic battle. There’s an overreliance on incongruous pop ditties and not all the jokes land, but things are funny and frenetic enough to propel The Lego Batman Movie forward.

Summary: The Lego Batman movie prizes reference-based humour over plot, but even if it doesn’t use the Lego Batman world to its full comic potential, it’s an entertaining time.