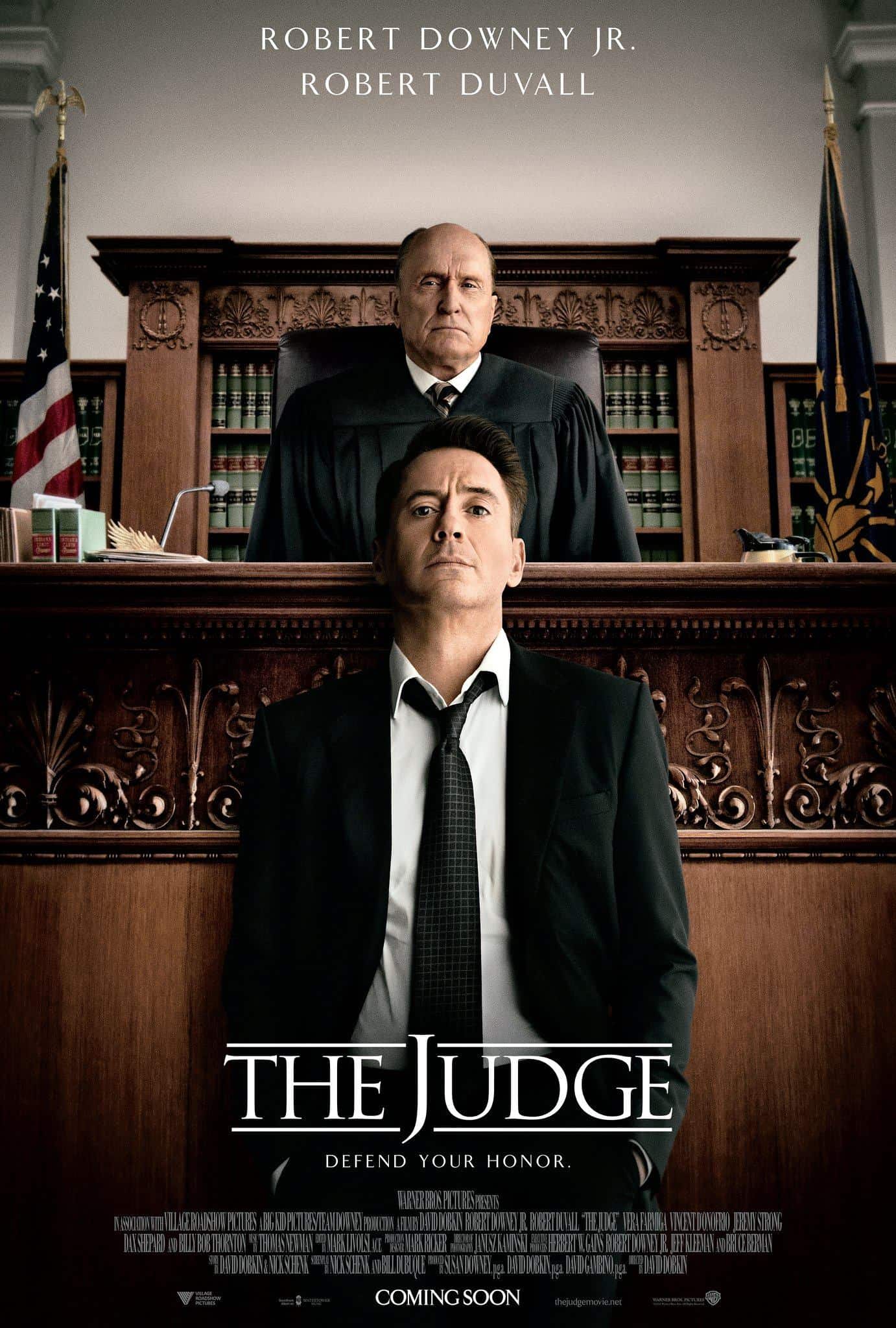 Remember when, after the worst of his personal troubles and before his comeback as a marquee name, Robert Downey Jr. would star in dramas like The Singing Detective, A Guide To Recognising Your Saints and Charlie Bartlett (with the occasional The Shaggy Dog because he had to pay the bills)? The Judge, Downey Jr.’s first full-on drama in a while, harks back to those days. He plays Hank Palmer, a hotshot lawyer who reluctantly returns to his hometown of Carlinville, Indiana when his mother dies. He sees his brothers Glen (D’Onofrio) and Dale (Strong) again but there’s one reunion he’s truly dreading: that with his estranged father, the titular judge, Joseph Palmer (Duvall). Hank can’t wait to escape back to Chicago when he learns his father is accused of murder. Hank has to defend his father against prosecutor Dwight Dickham (Thornton) while father and son are at each other’s throats. Hank also takes the opportunity to mend other bridges and rekindle a romance with his high-school sweetheart Samantha (Farmiga). 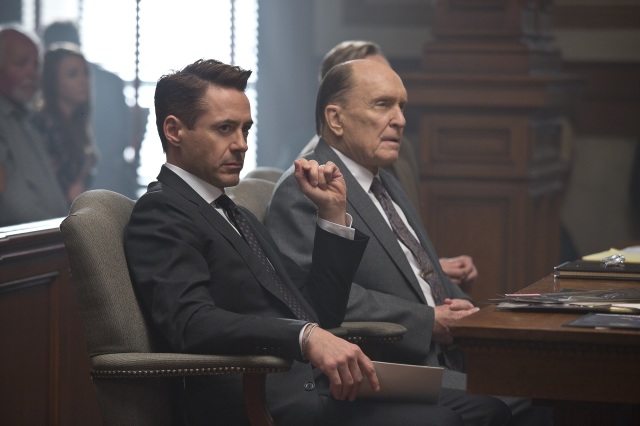 If you’ve seen the trailers for the film, you might find it tonally hard to place. Indeed, this is a movie that has plenty of heavy family drama but begins with a moment of slapstick toilet humour. A character also experiences acute bowel function failure and it’s supposed to be a sad moment but it might be seen as unintentionally funny. It seems director David Dobkin was aiming for “bittersweet”, but misjudges this on several occasions. The screenplay by Nick Schenk and Bill Dubuque piles on the clichés: tempestuous father-son relationship, the prodigal son returning against his will, the adorable little daughter to whom our main character hasn’t been the best dad, a mentally-handicapped younger brother and a teen romance from which both parties have never really moved on, all set in a small town where everyone knows everyone else. It sometimes appears that the writers are aware of the overly-familiar, often sentimental nature of the script, attempting to temper this with wiseacre cynicism. This results in an uneven film that almost lurches from shouting match conflicts to a sappy home video montage set to Bon Iver’s Holocene. 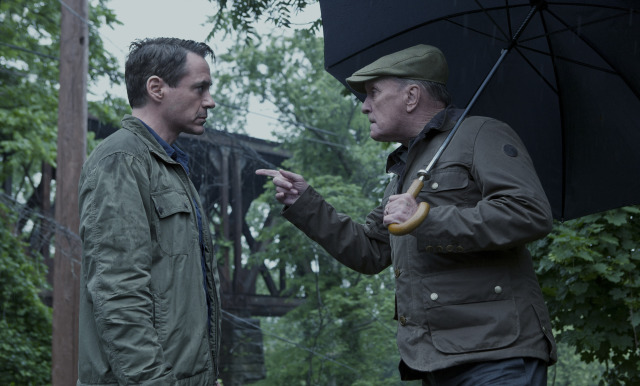 There’s one cliché we left out in the above paragraph: that of the protagonist being a glib, sharp-tongued “man of Teflon” lawyer. Downey Jr. attacks the role in his typical charismatic, entertaining fashion. He once described his take on Tony Stark as “a likeable asshole” and that’s a character type he excels at playing. Schenk and Dubuque have written lots of snarky, snappy dialogue for the Hank Palmer character, and lines like “I’ll extract the truth from your ass like tree sap” just sound great when they fly off Downey Jr.’s tongue. It’s nothing particularly risky for him but he’s far from sleepwalking through this one either. The big draw is seeing the two Roberts play against each other, and Duvall once again proves why he’s considered a living legend. Judge Joseph Palmer is a proud, stern man who has suffered a personal loss and conceals his vulnerabilities, someone who has spent years in the courtroom but suddenly finds himself on the other side, standing trial. Duvall is able to cut through the overly-calculated moments of tenderness to deliver an affecting, thoughtful performance. 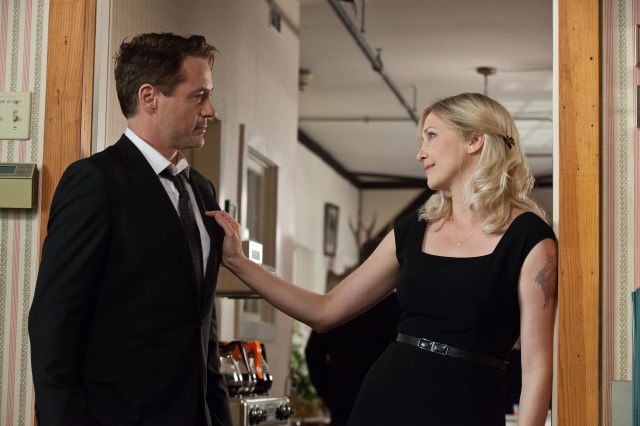 While the film is squarely Downey Jr.’s and Duvall’s to carry, the supporting cast is generally decent too and D’Onofrio’s role in this movie means that Iron Man and the soon-to-be-Kingpin are brothers. Farmiga, blonde, sporting a tattoo and pretty much unrecognisable, is convincing as the diner proprietor who finds herself falling for her high-school sweetheart while still being very much wise to his ways. Dax Shepard plays the fumbling, earnest small-town lawyer/antique shop owner a little too broadly and Jeremy Strong’s portrayal of the mentally-challenged Dale is cringe-inducing, though this is likely due more to the way the character is written as the awkward comic relief than his actual performance. 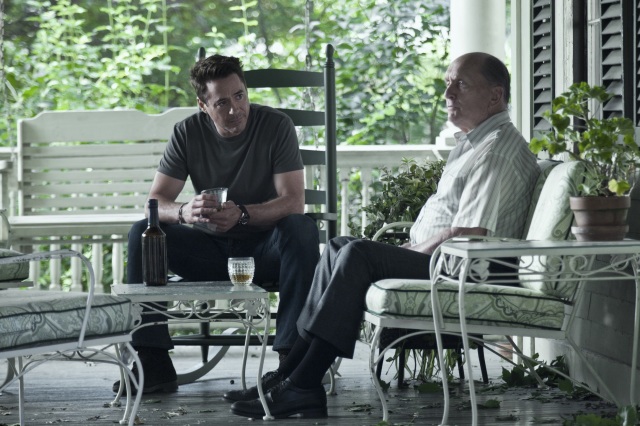 In addition to the performances, the cinematography by Janusz Kamiński, Steven Spielberg’s regular director of photography, is praiseworthy. With the way the film is lit and shot, Kamiński conveys the combination of small-town home and hearth with the feeling of feeling trapped in a place with too many bad memories associated with it. When the film and its cast was announced, there were murmurs of its awards potential, but this one is very unlikely to stand against the other films of the upcoming awards season. Dobkin, known for comedies like Wedding Crashers and Shanghai Knights, is at least a little out of his depth dealing with the family dysfunction and the courtroom drama in The Judge. However, thanks to the strong lead turns from Downey Jr. and Duvall, this is worth a look.