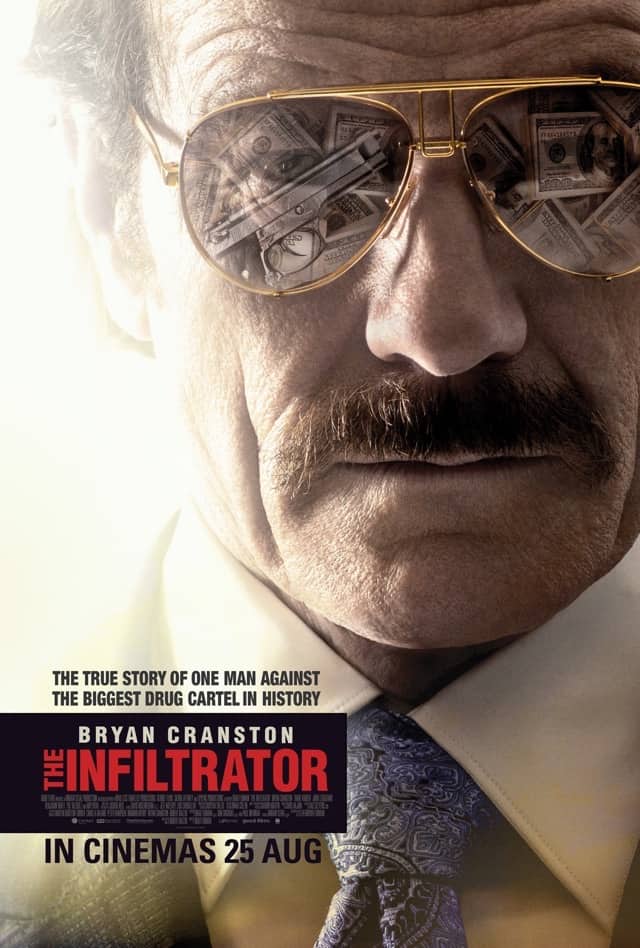 In Breaking Bad, Bryan Cranston played a ‘cook’. In this biopic, he’s mixed up with treacherous drug cartels yet again, but this time, he’s a ‘washer’. Cranston portrays Robert Mazur, a U.S. Customs agent who takes on the alias ‘Bob Musella’ to go undercover as a money launderer. Through the connections of fellow undercover agent Emir Abreu (Leguizamo), Bob is able to infiltrate the power Medellin Cartel, run by Pablo Escobar. Bob is paired with rookie agent Kathy Ertz (Kruger), who poses as his fiancée. They ingratiate themselves with high-ranking Medellin trafficker Roberto Alcaino (Bratt) and Alcaino’s wife Gloria (Elena Anaya), winning the couple’s trust. The high-risk nature of the job puts a strain on the relationship between Bob and his actual wife Evelyn (Aubrey), additionally threatening the safety of their two young children. Bob puts everything on the line as he journeys deeper down the rabbit hole, immersing himself in a world of violence and deception.

The real-life Robert Mazur served as a consultant on Michael Mann’s Miami Vice, and after Mann told Mazur that his own story had enormous potential as a movie, Mazur sat down to pen an autobiography. The double lives that undercover operatives lead have always been compelling to audiences. The Infiltrator is a tale of a decent man who went swimming with sharks for a living, with the danger of the prop dorsal fin coming unstuck from his back an ever-present possibility. There are moments of nail-biting tension and shocking brutality is employed with utmost effectiveness. However, director Brad Furman’s stylistic flourishes, including a marked overuse of colour filters, undermine the story’s authenticity instead of enhancing it. The screenplay by Furman’s mother Ellen Brown does hew to certain crime movie conventions, but there is a palpable sensitivity to the character interactions lying beneath the blood-soaked luridness.

The film rests squarely on Cranston’s shoulders, and there’s never any doubt that he can carry it all the way. He’s an actor who is immensely capable of eliciting sympathy, but can also summon an intimidating toughness that Breaking Bad fans are all too familiar with. Bob comes face-to-face with the searing ugliness at the heart of the drug trade on multiple occasions, and the way Cranston conveys Bob’s struggle to maintain his composure is harrowing. The realisation that he will have to betray people who, however ruthless, have trusted and shown kindness to him, eats away at Bob. The combination of Cranston’s performance and the circumstances in the plot mean that Bob is never just a boring hero despite his innate nobility.

The relationship between Bob and his pretend fiancée, juxtaposed against that between Bob and his real wife, result in some moments that are overwrought and others that are quite moving. Aubrey’s Evelyn never comes off as unreasonable, and a scene in which Bob takes Evelyn out for an anniversary dinner but is recognised by a client is one of the film’s highlights. The mutual respect that forms between Bob and Kruger’s Kathy is heartfelt, and when they’re both in the trenches, they’re the only ones the other can truly seek solace in. The possibility that Bob will succumb to temptation lingers over this relationship, but it’s never played up to a manipulative extent.

There are too many characters to keep track of, and it’s sometimes challenging to remember who does what for whom. Bratt brings considerable charm to the role of Alcaino, nicknamed ‘The Jeweller’. It’s made abundantly clear that he’s a dangerous man, but when Alcaino and his wife invite Bob and Kathy to their house and treat them with such hospitality, one can’t help but dread the inevitable betrayal. Leguizamo plays the comic relief as he often does, but the wily Abreu still has an edge to him despite his jocular nature. Olympia Dukakis is a hoot when she briefly shows up as Bob’s larger-than-life Aunt Vicky, but Amy Ryan’s turn as Bob’s no-nonsense U.S. Customs boss Bonni Tischler borders on caricature.

The History vs. Hollywood website has become an invaluable resource in evaluating the accuracy of movies touted as being based on true stories. A cursory look through their write-up on The Infiltrator reveals that the most explosive, intense parts of the movie, including moments when someone right next to Bob gets killed, didn’t actually occur. Nevertheless, the real-life Mazur is pleased with Cranston’s portrayal of him, and he continues to work to fight money laundering. The Infiltrator reinforces the stereotype of cartels as being as colourful as they are deadly and doesn’t provide much insight into their inner workings, but its protagonist’s perspective gives the story emotional heft.

Summary: Bryan Cranston is electrifying as he dives into Robert Mazur’s double life, but the echoes of other films and TV shows diminishes the impact of the true story.