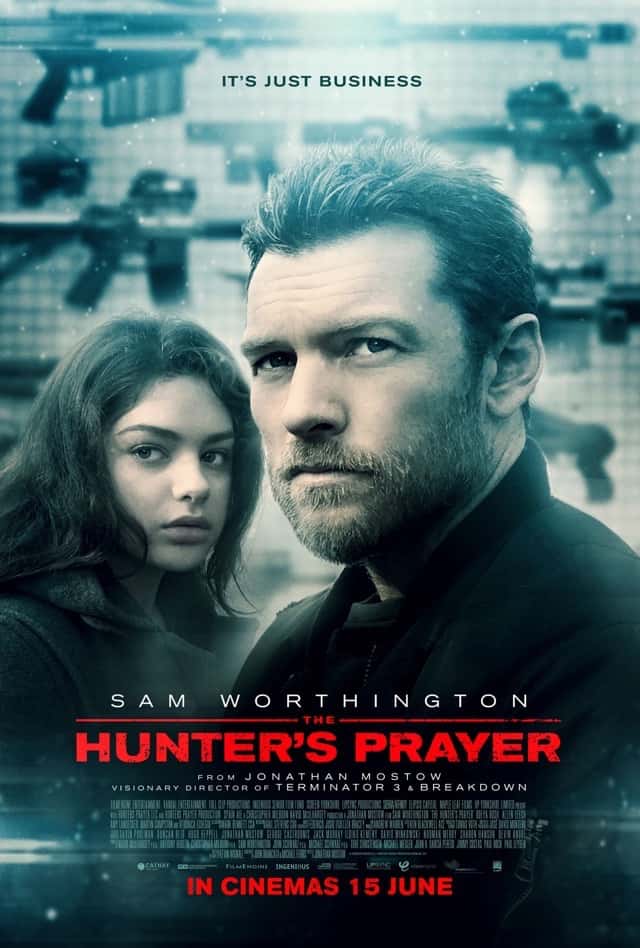 Sam Worthington was once a Terminator, and in this action thriller, he becomes a hunter. Worthington plays Lucas, a hitman in the employ of ruthless English magnate Richard Addison (Leech). Metzger (Compston), another one of Addison’s assassins, kills Martin (Eben Young) and Pamela (Stephanie Dooley) Hatto, torching their upstate New York home. Martin’s daughter Ella (Rush) is studying at a boarding school in Switzerland. Addison is eager to tie up loose ends, and sends his goons after Ella. Lucas takes it upon himself to protect Ella, who vows vengeance upon Addison. Because of Addison’s wealth and influence, he is untouchable. With Lucas as her guide, Ella goes to great lengths to wreak vengeance upon Addison, in a mission that takes the pair from Switzerland to France to the United Kingdom.

The Hunter’s Prayer is based on Kevin Wignall’s novel For the Dogs. The film was shot from late 2014 to early 2015, and appears to have sat on the shelf for a while. We’re told not to judge a book by its cover, but it’s hard to look at the poster featuring Worthington and Rush looking serious in front of a rack of guns and not think “generic action thriller”. That same poster calls Jonathan Mostow, who helmed Terminator 3 and Surrogates, a “visionary director”, which is cause of stifling laughter.

Mostow adopts dreary post-Bourne spy movie sensibilities in telling what amounts to your typical hitman-with-a-heart-of-gold tale. The Hunter’s Prayer was shot in Hungary and England, but the European locations are deliberately deprived of substantial glamour, so this doesn’t come off as a scenic James Bond-style travelogue. The action sequences are nothing to write home about, with a cliffside car chase early in the film generating the most excitement.

The adjective “bland” is often used to describe Worthington, who seemed poised for superstardom after Avatar, but then James Cameron took too long in prepping the sequel. To his credit, Worthington takes the role of Lucas quite seriously, and musters up as much intensity as he can playing the tortured hitman. While Lucas is deadly and efficient, he is also shackled by a crippling drug addiction. Much as Worthington tries, the character is too bound by genre clichés to be distinct, or for the audience to care too much about him.

There’s a legacy of action films in which young girls play the lead or co-lead, including The Professional, Kick-Ass, Hanna and recently Logan. Rush won the role after the initially-cast Hailee Steinfeld dropped out due to scheduling issues. The Hunter’s Prayer is meant to be grounded, so Ella doesn’t possess any wild combat proficiency. She’s spoiled and sheltered, but is sympathetic because she’s been neglected by her father and packed off to boarding school. The trajectory of the bond that forms between Ella and Lucas is predictable, and while Rush isn’t outright annoying in the role, Ella should be easier to root for than she is.

Leech’s Addison is the typical corporate creep villain, a wealthy tycoon who delegates the dirty work to his minions. Leech does have some fun with the role and indulges in a spot of moustache-twirling, but like most everything about The Hunter’s Prayer, he just doesn’t stand out. There’s a hint of intrigue in the severe way in which Addison treats his son, but that isn’t sufficiently explored. Compston, whose Metzger is supposed to be an utterly scary henchman, isn’t as intimidating as he needs to be. Landecker’s crooked FBI agent is meant to add a layer of intrigue to the proceedings, but not enough is done with her insidiousness.

The Hunter’s Prayer has a little more polish than your run-of-the-mill straight-to-DVD action flick, but it’s an almost completely joyless enterprise. Whether it’s the bottled-up emotions, the inner conflict, the child who is ripped from their innocent existence or the car chases and shootouts, anything you’ll see in The Hunter’s Prayer has been done considerably better elsewhere.

Summary: Sam Worthington takes his role more seriously than he must, but that doesn’t help The Hunter’s Prayer rise out of the straight-to-video action flick doldrums.