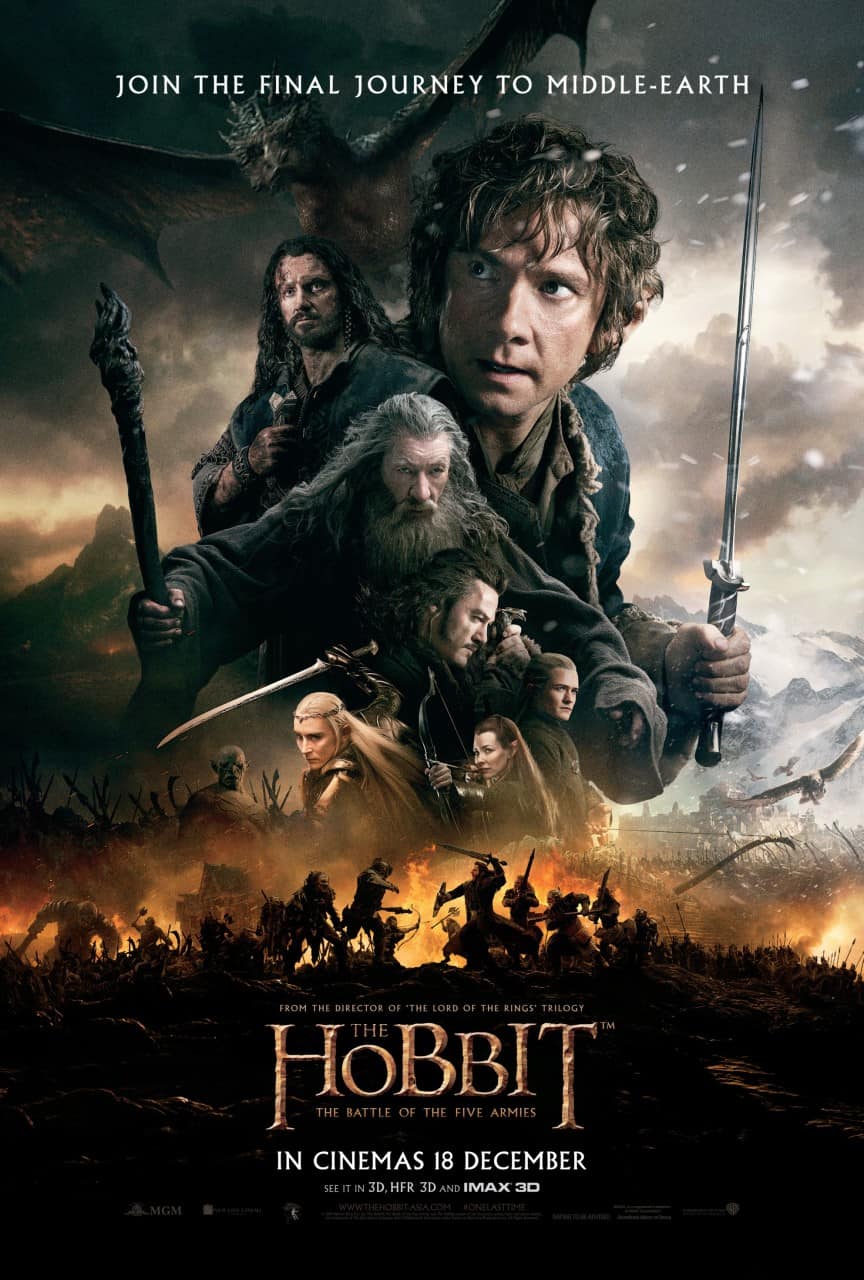 There’s simply no denying it: The Hobbit is no The Lord Of The Rings. While cast and production values remain absolutely top-notch, the first two films in the Hobbit trilogy have proved disappointing, especially when assessed against the sublime trio of movies that first transported us to Middle-earth. It’s evident that the slim narrative of J.R.R. Tolkien’s source novel – even when supplemented with details and backstory from his Appendices – simply doesn’t merit an expansion into three unnecessarily protracted movies. Strictly speaking, The Battle Of The Five Armies suffers from many of the same problems as its predecessors. But director Peter Jackson proves once again that he’s a dab hand at crafting epic battles underpinned by love, loyalty and sacrifice. As a result, the final Hobbit film is (more or less) the best of the trilogy, although it still pales in comparison to what comes after it.

Bilbo (Freeman) and the dwarven company of Thorin Oakenshield (Armitage) watch in horror as Smaug the dragon (Benedict Cumberbatch) lays waste to Laketown. When Bard (Evans) bravely manages to take the dragon out, Thorin regains the mountain kingdom of Erebor by default. He succumbs swiftly to the ‘Dragon Sickness’ – a hungering greed to keep the treasures of Erebor all to himself, refusing a claim from elven king Thranduil (Pace) and rewards for Bard and the now-homeless humans. As a battle brews between dwarves, elves and men, Gandalf (McKellen) returns from Dol Goldur with news that entire battalions of orcs are on the march as well – signs of an incipient evil that might soon sweep Middle-earth again.

Truth be told, The Battle Of The Five Armies doesn’t have quite the sense of magic and poetry that so effortlessly infuses the Lord Of The Rings trilogy. Indeed, the script is peppered with simplistic dialogue, with many characters forced to navigate entire chunks of exposition or deliver not particularly witty one-liners. Bilbo and Gandalf, for instance, spend a great deal of the raging battle standing still and expounding on what’s going on around them. It also seems remarkably odd for a film weighted down with so many characters, including wholly invented ones like lovelorn elf Tauriel (Lilly), that so much screentime is devoted to Alfrid (Ryan Gage). The vile right-hand man of Laketown’s Master (Stephen Fry) is clearly meant to provide comic relief now that the dwarves are caught up in emotional turmoil of their own, but winds up annoying rather than entertaining the audience.

And yet, Jackson somehow manages to salvage the film from itself, in no small part because of the engrossing battle scenes and some deft character work from his stellar cast. The climactic battle stretches well over an hour, as the upper hand shifts from orcs to everyone else and back again, but Jackson keeps the action and drama coming thick and fast. Waves of orcs slam into ragged battle lines of men, ranks of elves swell and rise, and Thorin wavers between greed and honour as he decides whether to plunge into war or stay safely sequestered within the impregnable walls of Erebor. Many of the battle sequences may be technically extraneous, but it’s hard to care too much when Legolas (Orlando Bloom) – scoring his requisite action-hero moment – dances his way to safety over a collapsing bridge and takes out an orc or two while doing so.

Jackson’s cast – actors we’ve spent so much time with over the past decade – rises remarkably to the occasion. There’s stellar support, as always, from fan favourites like McKellen and Cate Blanchett, whose Galadriel goes briefly supernova in a confrontation which foreshadows the darkness that will befall Middle-earth come The Lord Of The Rings. Armitage lends considerable depth and weight to Thorin, who could easily lose a great deal of audience sympathy when he burrows further into himself and starts losing (and banishing) friends. Pace exudes a solemn, almost malevolent dignity as Thranduil, one which he tempers with a surprising amount of heart as well. For a brief, touching moment, the imperious king finds within himself the father he has forgotten how to be. Even Lilly, who is saddled with a made-up character and fledgling, forbidden romance with dwarf Kili (Aidan Turner), miraculously mines some genuine emotion from a fairly poorly-conceived and utterly fictitious love story.

The true triumph of the Hobbit franchise, however, remains Freeman. He’s playing the same archetype that Elijah Wood did in The Lord Of The Rings – the homebody Hobbit who’s small in stature yet casts an enormous shadow – but makes it feel thoroughly fresh. Freeman’s Bilbo is equal parts heart, humour and hero, and he makes it easy to see why Gandalf holds hobbits in such high esteem. Freeman’s scenes with Armitage, rife with paranoia and tension on Thorin’s part, are some of the best in the film, with a huge emotional payoff at the end.

With The Battle Of The Five Armies, the curtain really does fall at last on Jackson’s vision of Middle-earth. In the past three years, it’s been – frankly – a pretty bumpy journey. In too many ways, the Hobbit trilogy recalls but never quite manages to recapture the indescribable magic of The Lord Of The Rings. That’s true of the final film in the franchise as well. But it certainly comes closer than either of its two predecessors to truly making Middle-earth live again. The film’s final scenes quite literally bring everything home, and in that final swell of music and emotion, throw open the doors to the epic world that Jackson first invited us into over a decade ago.

Summary: A decent, if problematic, final chapter for the Hobbit trilogy.