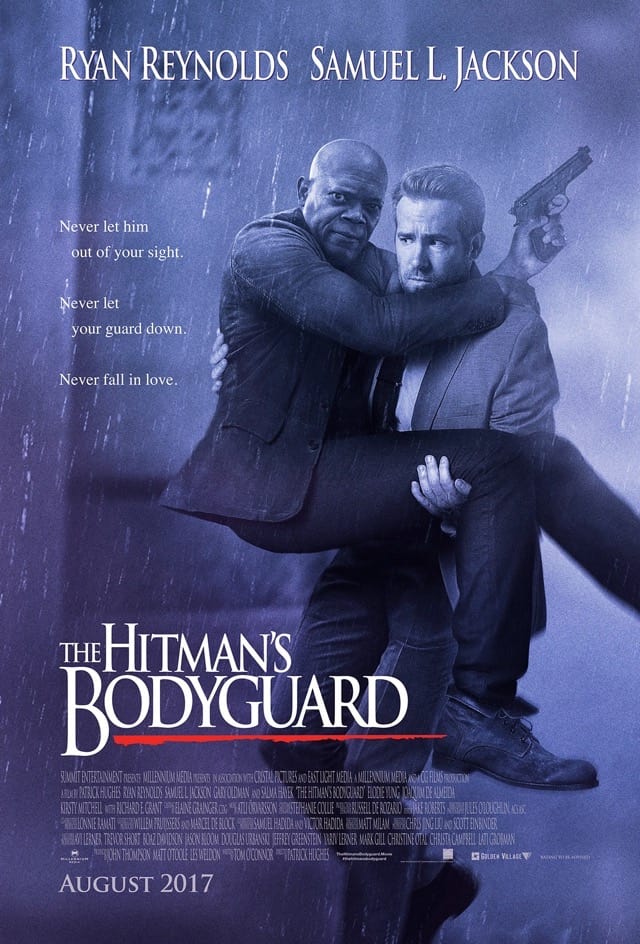 This reviewer has long thought that The Hague would be a cool setting for an action movie to unfold. Imagine this scenario: a brutal dictator is brought before the International Court of Justice, but his sympathisers disrupt the trial, taking the judges, witnesses and other attendees of the trial hostage. It’s up to a John McClane-style hero to save the day. The Hitman’s Bodyguard uses a similar premise, but with a comedic twist.

Michael Bryce (Reynolds) is a triple-A rated executive protection agent, and his services are highly sought-after by arms dealers, warlords and other shady figures with a long list of enemies. After a botched job, Bryce’s career is in the dumps. His shot at redemption is a job escorting hitman Darius Kincaid (Jackson) to The Hague, where Kincaid is set to testify against Belarusian dictator Vladislav Dukhovich (Oldman). Kincaid agrees to testify on the condition that his wife Sonia (Hayek), herself a career criminal, is released from prison. Bryce’s ex-girlfriend, Interpol agent Amelia Roussel (Yung), has learned that there is a mole within Interpol and Bryce, being on the outside, is the only person she can trust to protect Kincaid. The catch: Bryce and Kincaid have been sworn enemies for years, Bryce finding himself caught in Kincaid’s crosshairs countless times across their respective careers. Kincaid insists that he doesn’t need Bryce’s protection, but the unlikely duo must rely on each other to survive the onslaught of Dukhovich’s mercenary army.

The Hitman’s Bodyguard seemed promising: there’s plenty of potential in teaming up Ryan Reynolds and Samuel L. Jackson, and the marketing campaign that riffed on the 1992 film The Bodyguard was reasonably witty. Unfortunately, it didn’t quite work out that way. Director Patrick Hughes, who helmed the mediocre The Expendables 3, struggles to make the film seem fresh or genuinely thrilling. Despite the obvious chemistry its stars share, there’s only so much expletive-laden bickering one can take before it just gets tiresome. The conflict between Bryce and Kincaid is meant to be amusing, but it just feels like a single joke that’s stretched out. As written by screenwriter Tom O’Connor, the back-and-forth between Reynolds and Jackson isn’t nearly clever enough to keep our interest.

The Hitman’s Bodyguard also suffers tonally: a bloody bar brawl scored to Lionel Richie’s “Hello”, and Atli Örvarsson’s over-the-top Bond movie-esque score indicate that the film is aiming for ironic self-awareness. However, the villain is depicted committing full-on war crimes, and one character’s tragic backstory is depicted in a dark flashback. Then there’s general silliness, like when our protagonists hitch a ride on a bus full of nuns. The Hitman’s Bodyguard doesn’t commit to full-tilt madcap comedy because it also wants to be a cool action flick, and ends up stranded in between. The action sequences are mostly filmed in shaky-cam so they’re difficult to enjoy, but the boat chase through Amsterdam’s canals and the explosive finale are reasonably fun set pieces.

Reynolds and Jackson play strictly to type: the former is a wisecracking action hero, and the latter is a foul-mouthed badass who doesn’t suffer fools. While they appear to be enjoying themselves, the dysfunctional buddy cop dynamic falls short of the fireworks one would expect from the pairing of performers who, in the right roles, can be supremely entertaining. The incessant arguing between the pair does draw out a few laughs, but most of the would-be zingers Reynolds and Jackson exchange fall flat. You might find yourself wondering how this would go if Reynolds and Jackson were playing Deadpool and Nick Fury respectively – that would be more exciting.

Gary Oldman can always be counted on to play a fantastic villain: he can throw a shouting fit like few others. He’s good here, no surprise, but he seems to have wandered in from a different movie. The character is introduced committing war crimes, that introductory scene feeling uncomfortably out of place in what is ostensibly a light-hearted action comedy.

Hayek is ridiculous amounts of fun, swearing up a storm and putting in a performance that’s markedly different from what we’ve seen from her before. Yung doesn’t make much of an impact, but it is fun to imagine Deadpool and Elektra being former lovers.

The Hitman’s Bodyguard seems like it should’ve been an entertaining lark, but it comes off as generic and oddly lethargic, despite trying hard to come off as funny. While its action sequences are unremarkable and its comedy is largely forced, The Hitman’s Bodyguard can thank its leads for wringing some laughs out of the material.

Summary: It’s mostly a rehash of buddy action movie clichés and the fights and chases are nothing to write home about, but even when given middling material, Ryan Reynolds and Samuel L. Jackson make some of this work.