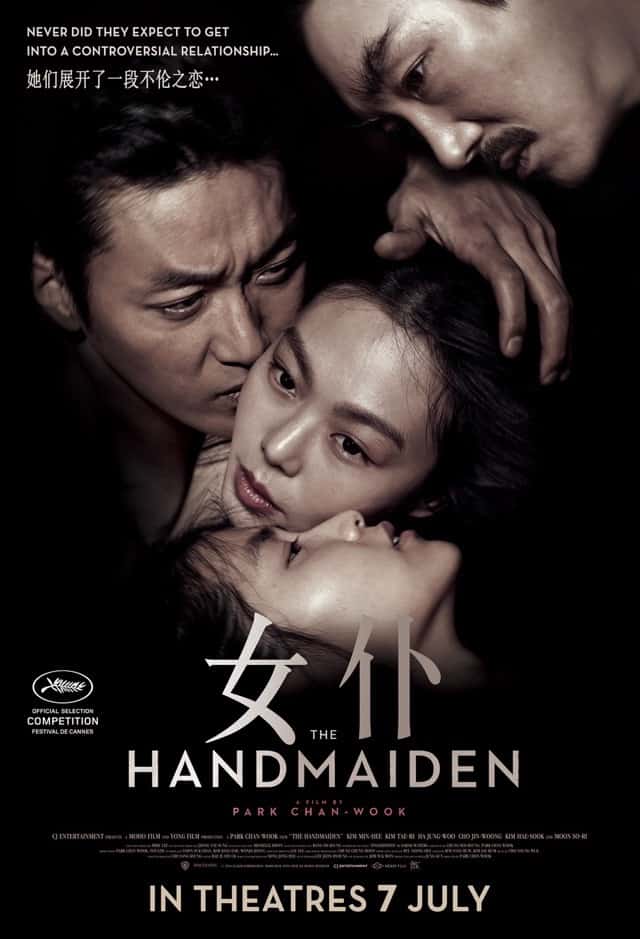 Here comes yet another masterpiece by Park Chan-Wook, the director of the critically acclaimed Joint Security Area, Thirst, Stoker and The Vengeance Trilogy.

This film generated the loudest buzz at the Cannes Film Festival this year, with it being considered for the Queer Palm award, an independently-sponsored prize for selected LGBT-relevant films entered into the festival, and also scored a much-desired nomination for the Palme d’Or award for Park – the Festival’s highest honour.

Adding to the film’s mounting accolades, production designer Ryu Seong-Hee also became the first ever South Korean recipient of the Vulcan Award of the Technical Artist, an independent prize given for the best technical contribution to a film. And rightfully so, as her gorgeously impeccable art direction skilfully and seamlessly marries the slightly gaudy lavish excesses of gothic European architectural style with the minimalistic, traditional symmetry of classic Japanese elegance, most evident in the elaborate design of Lady Hideko’s mansion home. Then, of course, there is the breath-taking cinematography of the picturesque beauty of the Korean landscape, which imbues even the darkest of thriller films with a sense of haunting splendour.

With all the hype and nothing but high praise from critics, it’s certainly no surprise to hear that the film already broke box office records in its opening week with a whopping 1.8 million viewers. Even more impressively, distribution rights to the film have already been sold to 175 territories, trouncing the 2013 English-language South Korean sci-fi thriller Snowpiercer, which starred Chris Evans, to become the most widely-distributed Korean film in cinematic history.

Based on Welsh writer Sarah Water’s historical crime novel Fingersmith, which won the CWA Ellis Peters Dagger for Historical Crime Fiction, and was shortlisted for the prestigious Man Booker Prize and Baileys Women’s Orange Prize for Fiction, Park’s latest film venture The Handmaiden attempts a creatively radical reinterpretation of the story by transposing it from Britain’s Victorian era to 1930s Korea under Japanese colonial rule.

At the core of the newly-revamped storyline are four key characters: a con man who takes on the fancy persona of Count Fujiwara (Ha Jung-Woo) in order to seduce and marry an heiress for her fortune; the sheltered emotionally fragile heiress Lady Hideko (Kim Min-Hee) who resides in seclusion with her uncle Kouzuki (Cho Jin-Woong) who also has less than honourable intentions of wedding her and inheriting her massive wealth; and a young female pickpocket Sook-Hee or Tamako or Ok-Ju (Kim Tae-Ri), as she is variously named, hired by Fujiwara to serve as the titular handmaiden to Lady Hideko to aid him in his scheme to con the heiress into falling for and eloping with him, so he may then rob her of her riches before throwing her into an asylum. But unknown to each of the four, as well as to the audience, nobody is who they seem and even the best laid plans can go awry.

The story unfolds in three acts, and without giving too much away, you’re in for a treat. There are more twists, turns and flips than a rollercoaster ride, and the end will leave you hankering to go back for more.

Fans of the original novel might lament about how this Korean adaptation departs quite drastically from the second act onwards, with the complete removal of certain plotlines and the exclusion of certain characters, but this reviewer applauds Park’s decision to do so. Not only did it serve to tighten the plot and pace, it also made the connection between the four core film characters more coherent and impactful. The film might be almost two-and-a-half hours long, but never once did any of it feel laborious or pointless.

The two female leads definitely stand head and shoulders above their male counterparts, with their standout performances. Based on her convincing portrayal of Sook-Hee, it’s pretty hard to believe that this is actually Kim Tae-Ri’s acting debut, having scored the role after beating out 1,500 candidates at the audition stage. Park definitely picked the right girl for the job, as Tae-Ri nailed the role with just the right balance of smugness as the brazen, uncouth, street-wise ragamuffin of a pickpocket, the wide-eyed innocence and playfulness of a pauper brimming with excitement at the experience of a luxurious life, and the emotional conflict of a young girl confused over her feelings of love and lust towards her mistress.

As for Kim Min-Hee, her chameleon-like ability to switch between multiple screen personas within seconds uncannily reminded this reviewer of the chilling but captivating performance of Rosamund Pike in Gone Girl. With such versatility and depth, she is definitely one to look out for in years to come.

Those familiar with Park’s work won’t be disappointed with his signature pain fetish and bravery in exploring controversial subject matter front and centre of the third and final act. Fans of Oldboy will also be excited to hear that there is a cameo appearance here, close to the end of this film.

Summary: Fans of Park Chan-Wook’s Vengeance film trilogy will be pleased that the auteur has not lost his touch. If you liked Gone Girl, you’ll be thrilled to discover another film masterpiece that is just as sick and twisted as it is brilliant and complex. And fans of the Fingersmith novel and its BBC adaptation will be more than satisfied that this Korean version not only does justice to the story but is possibly even better than it.