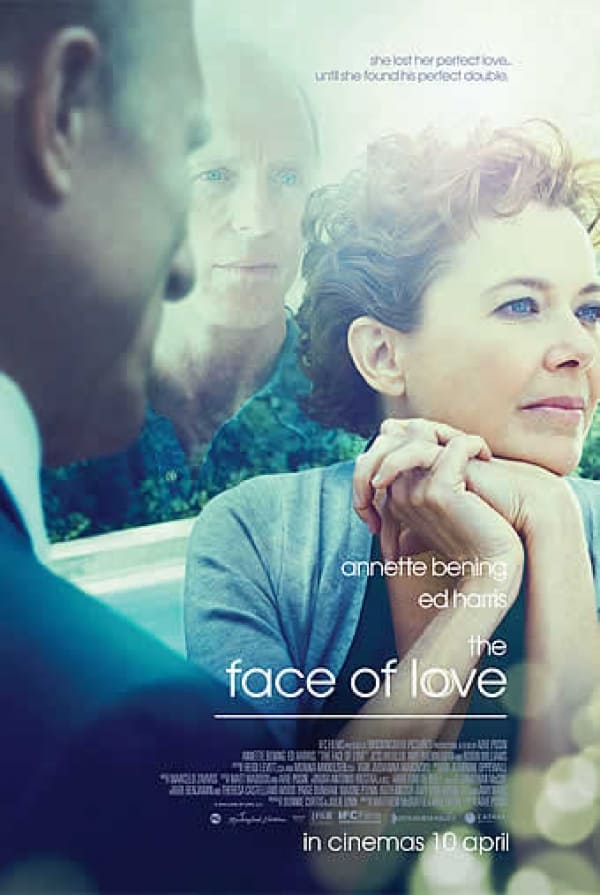 When does deep, abiding love tip over into unhealthy, tragic obsession? The answer, apparently, is all the time, in oddly affecting romantic drama The Face Of Love. Buoyed by a strong cast, this tale of a woman falling for her dead husband’s doppelganger manages to gloss over some of its more troubling implications for quite a while. But, ultimately, writer-director Arie Posin fails to disguise the fact that an interesting premise does not a great film make.

Nikki (Bening) is devastated by the sudden death of her beloved husband Garret (Harris). Without him, she drifts through a haze of loss and grief, unable to walk through her house or visit the museum without being reminded of him. After five years as a widow, she meets, quite by chance, Tom (also played by Harris), a man who’s the spitting image of her deceased husband. She tracks him down at a liberal arts college where he teaches, and the two strike up a romance: one that never quite manages to free itself from the troubling spectre of Nikki’s still-burning love for Garret.

Posin reportedly sat down to co-write his script after his mother gave him an idea for the story: she had spotted someone in the crowd who looked eerily like her dearly departed husband. There’s certainly a host of interesting ideas revolving around this premise. When does love turn into obsession? When does it keep the ones left alive from moving on? To what lengths can love drive a person? Indeed, The Face Of Love occasionally hits upon moments of quite startling insight, particularly when Nikki walks through her beautiful, empty house like someone already dead.

But the film also gets too caught up in its own premise. The relationship between Nikki and Tom unfolds in a realistic but also deeply creepy way: she frequently refers to him as Garret, and clearly slips into the delusion that her husband is alive far more frequently than she reminds herself that she’s with an entirely different man with his own identity and feelings. That’s not the bad part; in fact, it’s quite intriguing and tragic in its unsettling fashion.

What works less well is the way in which it all ends. The inevitable confrontation between Nikki and Tom is much delayed – she hides a family photograph with Garret, and for some reason he googles Nikki but never thinks to google Garret – and, when it finally takes place, is deeply anti-climactic and a bit silly. Instead of dealing with the very real ramifications of Nikki’s actions (she takes Tom to the scene of Garret’s demise to “make new memories!”), the film chooses to skip a year ahead, picking up the story in a ham-fisted way that gives no one any real emotional closure – not Tom, not Nikki, and certainly not the audience.

What joy there is to be had in this film comes from its astounding and very committed cast. Bening expresses more hope and despair in her face and eyes than the script sometimes allows her; she’s the reason Nikki comes off as sympathetic and heartbroken rather than crazed and callous. Harris’ part is pretty thankless, but he imbues Tom with a sad hopefulness: the way he proclaims that his heart soars because of the way Nikki looks at him will likely break yours. (Robin Williams, by the way, pops up as a neighbour who’s long held a torch for Nikki, but isn’t given very much to do.)

In some moments, The Face Of Love makes a very strong case for its existence. Within Nikki’s heartbreak, one can find shades of dangerous obsession and tragic delusion. Bening alone maps Nikki’s desolation in a wonderfully sensitive way. But, because of the deeply strange manner in which the film chooses to resolve Nikki’s relationship with Tom, it all rings too hollow in the end. This is not, as it turns out, The Face Of Love, but more The Farce of it.

Summary: Intriguing, with moments of shattering insight, but ultimately disappointing.