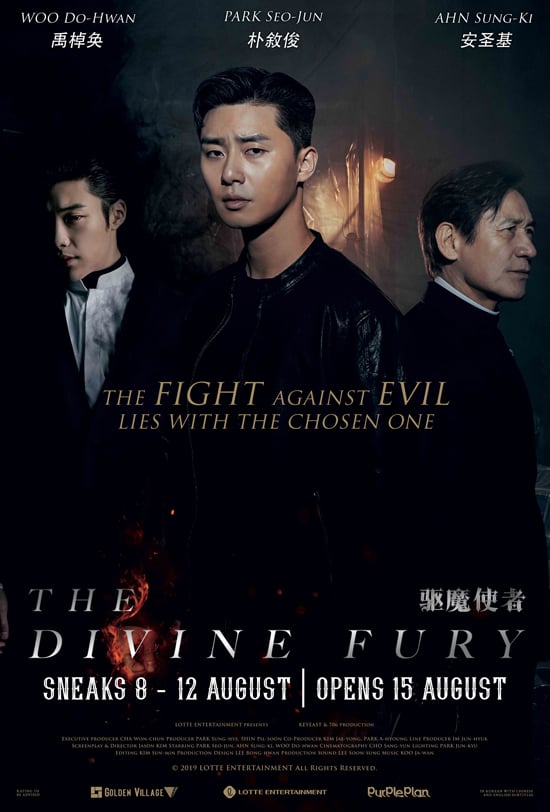 The Low-Down: Director Jason Kim Joo-hwan and Park Seo-joon (Parasite 기생충) return for another collab after a successful run of Midnight Runners 청년경찰, adding a demonic twist (but not without the usual tinge of comedy) in The Divine Fury 사자. Parasite’s lead Choi Woo-shik (Monstrum 물괴, The Princess And The Matchmaker 궁합) also returns the favour and makes a cameo appearance in Divine Fury, playing a young priest alongside veteran Ahn Seong-gi.

The Story: Having lost his father (Lee Seung-joo cameo) in a car accident despite a priest’s advice to pray hard during his hospitalisation, Yong-hoo (Park Ji-hyeon) condemns Christianity and its priests for “lying to him” about God. 20 years later, Yong-hoo is an MMA hotshot with Zero K.O.s to his name, but we quickly find out he has demonic strength. After a weird dream about his father and a cross, he has puncture wounds in his right palm that bleed profusely at night. A shaman points Yong-hoo an old Christian priest Ahn (Ahn Seong-gi) to get help and the struggle with God, demons, and a black bishop begins.

The Good: Divine Fury builds up genuine horror and suspense in many scenes involving demonic possession and black magic. Coupled with fantastic set design, dreadful soundtracks, and even the minute details of what the characters wear — Park’s all black costumes are juxtaposed against his late father’s all white — the movie nails it all. Most of all, the action sequences (apart from one awkward one-shot towards the end), though few, are on point, partly because of the camera work and the rest of the credit goes to the performers.

The Not-So-Good: Above all flaws, director Kim and crew introduced seemingly interesting and important plot details in Divine Fury, only to neglect them for the most part of the movie. One example is Yong-hoo’s MMA background and another is the demons that give him superhuman strength, both of which are established in the first 20 minutes of the 129-minute runtime. Plus a few subplots that are mostly fillers and story drivers, Divine Fury’s (black) magic falls slightly short in complete immersion.

Knock-Out Sequences: Ahn and Park’s exorcism scenes involving Park as Soo-jin and child actor Jeong. The make-up and CGI works are disturbingly realistic. Horror fans who love demons and such would be in for a treat while others (like this reviewer) might experience a few paranoid nights.

Watch Out For: The final fight sequence executed by director Kim’s skilful cinematography and choreography teams — not a single cut or transition is unnecessary or corner-cutting, plus most of the action are performed by the actors themselves.

Recommended? Yes, especially for horror fans who are interested in watching a Korean exorcism film with amazing make-up and CGI. Forgive some of the loose and sloppy plot points and you’ll enjoy the action, performances, and the technical spectacle.